Hamas, the Islamic Jihad and other groups held the exercise to prepare for a future conflict with Israel. 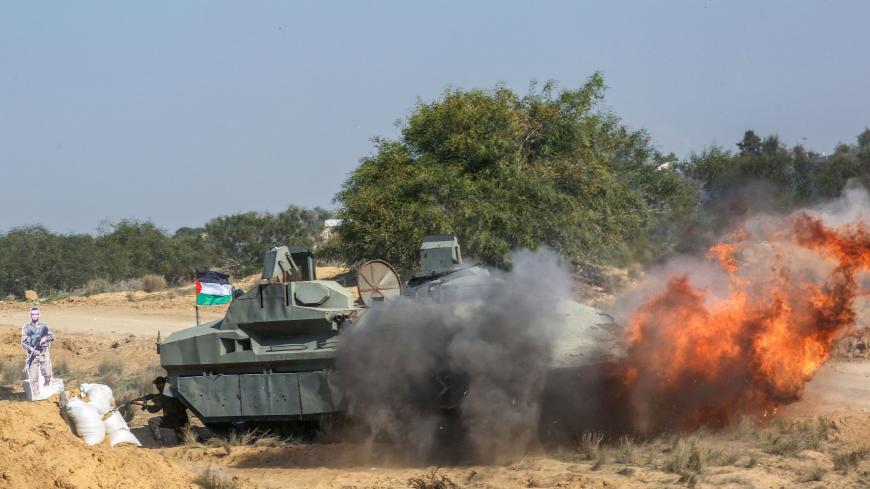 Fighters take part in military exercises by Palestinian armed factions, featuring mock Israeli military targets and vehicles, at a military site in Rafah in the southern Gaza Strip, on Dec. 29, 2020.

Palestinian armed groups conducted what was described as an unprecedented joint military drill in the Gaza Strip on Tuesday.

The exercise was the first of its kind and included all Palestinian “resistance” groups in Gaza, the Hamas-run Al-Aqsa TV reported. The drill sought to prepare the Palestinian groups for a future conflict with Israel, according to the outlet.

The factions shot eight rockets from Gaza into the Mediterranean Sea in the drill. The exercise will also include simulated land and sea operations, Reuters reported.

The political and military organization Hamas controls the Gaza Strip internally and has on-and-off clashes with Israel. Other groups fight Israel from the Palestinian enclave as well, including the Islamic Jihad. Hamas, the Islamic Jihad and smaller groups took part in Tuesday’s drill, the Israeli news outlet Yedioth Ahronoth reported.

A poster of slain Iranian commander Qasem Soleimani was erected in Gaza at the time of the event, according to the Saudi-owned outlet Al-Hadath. Hamas receives military support from Iran in its fight against Israel.

The joint drill follows the latest Israeli-Palestinian clashes in and around Gaza. Last week, rockets from Gaza heading for Israeli territory were intercepted by Israel’s Iron Dome air defense system. The Israeli military responded by striking Hamas targets in Gaza, The Times of Israel reported.

Hamas has controlled Gaza since 2007, when it successfully fought the internationally recognized Palestinian Authority there. Israel and Hamas have fought numerous wars and smaller-scale skirmishes since. A series of conflicts in August ended with a Qatari-brokered cease-fire.

Hamas controls Gaza internally, but Israel maintains a blockade over the area. Gaza also has a border with Egypt. Living conditions are widely described as poor there.

Israel considers Hamas a terrorist organization and Hamas does not recognize Israel. The two have had dialogue in the recent past, however. This month, Israel and Hamas reportedly talked about prisoner exchanges.