The Palestinian Ministry of Agriculture has adopted strict measures to prevent bird flu from reaching its farms from Israel, which has inflicted heavy financial losses on farmers. 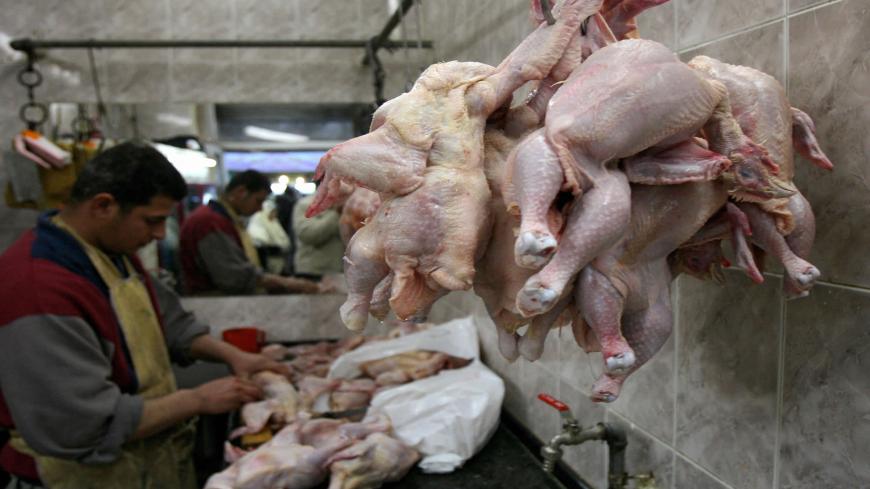 A Palestinian vendor cleans chicken at his shop; Palestenian Health Minister Fathi Mughli said today Palestinians should be vigilant after a case of H5N1 strain of bird flu that is dangerous to humans was detected in the northern Israeli town of Binyamina on the Mediterranean coast, Ramallah, West Bank, Jan. 6 2008. - Abbas Momani/AFP via Getty Images

RAMALLAH, West Bank — As part of measures to prevent the spread of bird flu, the Palestinian Ministry of Agriculture in Ramallah culled thousands of young birds imported from Israel, thus inflicting huge material losses on Palestinian farmers in the West Bank.

The ministry announced in a statement Dec. 14 strict preventive measures in the wake of the outbreak of bird flu within the Green Line, after the Israeli Veterinary Services informed veterinary authorities in the West Bank about the registration of clusters of the flu (H5N8) in different areas within the Green Line, specifically at turkey, poultry and poultry barns.

Mohammad Mahareeq, owner and director of Al-Mahareeq Investment Company for Poultry in Hebron in the southern West Bank, suffered a heavy loss after the Ministry of Agriculture, with the help of the customs police and the security services, culled Dec. 14, 15,000 broiler turkeys no more than two weeks old, two days after the farm was seized for violating the ministerial decision to ban poultry imports.

Mahareeq has been breeding turkeys for years and has about 60 employees; he imports chicks from Israel, breeds them and then distributes them.

“Every two months, I import about 30,000 chicks in two batches with a two-week interval so that the farms are constantly operating,” he said. “When the bird flu was discovered in Israel in October, I was expecting a batch of chicks, but the ministry asked me to cancel the order, and I respected the ministry’s decision. Ever since, our farms have not been operating. We have incurred losses worth millions of shekels.”

Mahareeq said that on Nov. 30, he brought about 15,000 chicks without the approval of the Ministry of Agriculture, but two weeks later the ministry culled the birds and categorically refused to cooperate with the farmer, let alone examine the chicks, despite the presence of papers proving their health status.

“The Ministry of Agriculture refused to give me 24 hours to defend myself, and it insisted on culling the birds inside the farm not because they were infected, but because I violated its decision,” Mahareeq said.

He added that the birds were culled in a heinous way, “as they were suffocated inside large plastic bags and left on the farm.”

Similarly, the ministry culled Dec. 13 about 13,000 broiler turkeys found on the farm of Amin Barham, a farmer from the city of Jenin in the northern West Bank.

Barham told Al-Monitor that since mid-October, “our farms have not been operating because they are committed to the ministry’s decision not to import poultry from Israel, but this has caused us losses worth millions.” He noted that the batch that was culled was certified by the Israeli Ministry of Health and conformed to the specifications.

“I have 60 employees and we have obligations to supply turkey meat to markets and restaurants in the northern and central West Bank. I tried to communicate with the ministry and suggested keeping the birds until a decision was issued, but the ministry refused my suggestion,” he noted.

Barham added, “The ministry is unable to confront the smuggling of turkeys from Israel into the West Bank. Therefore if the ministry wants to prevent us from importing, it must find us an alternative.”

West Bank farmers import turkey chicks from Israel to breed them in their farms due to the lack of incubators. They have, however, incubators for broiler chickens, in which Palestinians are self-sufficient.

Iyad al-Adra, director general of the Veterinary Services and Animal Health at the Ministry of Agriculture, told Al-Monitor that the measures were taken to protect the animal wealth due to the outbreak of bird flu within the Green Line more than 2½ months ago.

He said, “As soon as they learned about the outbreak of the disease within the Green Line, the Palestinian Veterinary Services surveyed all farms and poultry barns and the results came out negative. The tests were repeated, and it was then confirmed that the disease had not reached the country.”

Research and monitoring procedures for the disease have also been intensified in the Palestinian territories, and the process of introducing the raw materials needed in the manufacture of meat and mortadella has been organized, he added.

Adra said that there are smuggling operations from Israel into the West Bank, and that is why the ministry’s staff, along with the customs police and the Ministry’s Agricultural Control, have intensified their monitoring, while many shipments of broiler chicken eggs have been seized and the necessary legal action taken against them. More than 100,000 birds have been culled, he said.

Asked about Mahareeq and Barham’s complaints, Adra said, “What happened was a smuggling, not a legal import operation, as these imported quantities contradicted the Ministry of Agriculture’s decision, which posed a great danger that no one could bear the consequences of.”

Adra pointed out that, to date, the Israeli authorities have recorded more than 16 clusters of bird flu, 12 of which were at turkey farms, which infers that turkeys are super spreaders, and the decision to prevent their import is still valid and subject to evaluation.

Although farmers have incurred huge financial losses amid concerns over the collapse of the turkey breeding sector, the Ministry of Agriculture seems to be proceeding with its procedures in an attempt to prevent bird flu from reaching the Palestinian territories.