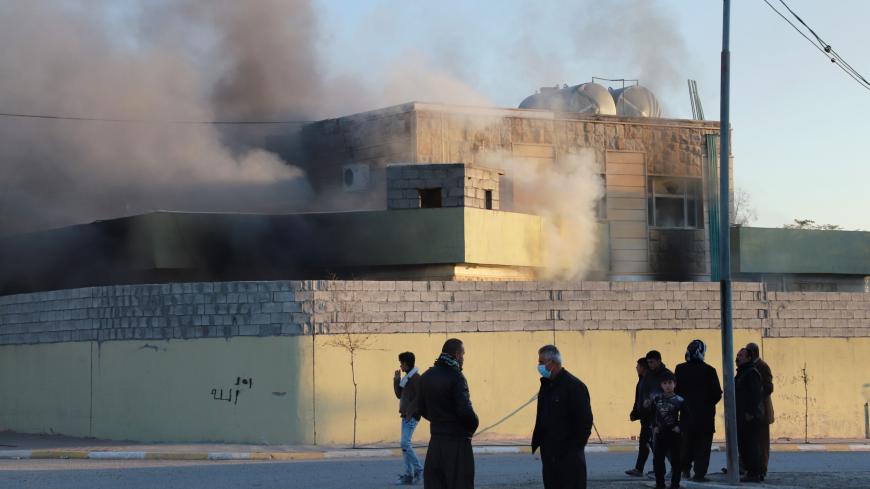 Iraqi Kurds stand outside a local police station set on fire by protesters in the town of Takia, about 60 kilometers (37 miles) southwest of the city of Sulaimaniyah, on Dec. 8, 2020. - SHWAN MOHAMMED/AFP via Getty Images

The death toll from a week of violent protests in Iraq’s semi-autonomous Kurdistan Region continues to mount, with at least nine dead in the clashes over delayed public salaries.

Ali Al Bayati, a member of the Iraqi Human Rights Commission, told Al-Monitor the death count had risen to eight protesters and at least one member of the security forces. A further 56 people have been injured in the unrest, he said.

The protests over unpaid salaries and high unemployment erupted last week in the city of Sulaimaniyah and have since spread to other towns in the northern provinces of Sulaimaniyah and Halabja. Hundreds of angry federal workers have taken to the streets to demand their full salaries and for the region’s leaders to put an end to government corruption.

Public sector workers have seen their salaries slashed and gone entire months without pay in 2020. The Kurdistan Regional Government, which employees more than 1.25 million people, hasn’t paid full salaries since October, in part due to ongoing budget disputes with the central government in Baghdad.

The clashes escalated this week, with protesters in the town of Saidsadiq reportedly setting fire to the offices of the major Kurdish political parties and other government buildings. The regional government reportedly responded by temporarily restricting internet access and pulling the NRT television station from the air.

The United Nations Assistance Mission for Iraq denounced the "acts of violence" and said “the right to peaceful protest must be protected.” Following his visit to the Iraqi Kurdish capital of Erbil this week, David Schenker, the State Department's top envoy for the Middle East, “expressed concern over the recent violence.”

Last year, central and southern Iraq saw deadly protests break out over Iranian influence, a lack of basic services and the central government’s alleged corruption. Scores of protesters were killed or wounded by security forces, and the UN documented the deaths of at least 490 demonstrators between October 2019 and March 2020.