Iraq is mulling the possibility of imposing a sales tax amid concerns over the consequences of such a move on Iraqis already struggling in a down economy. 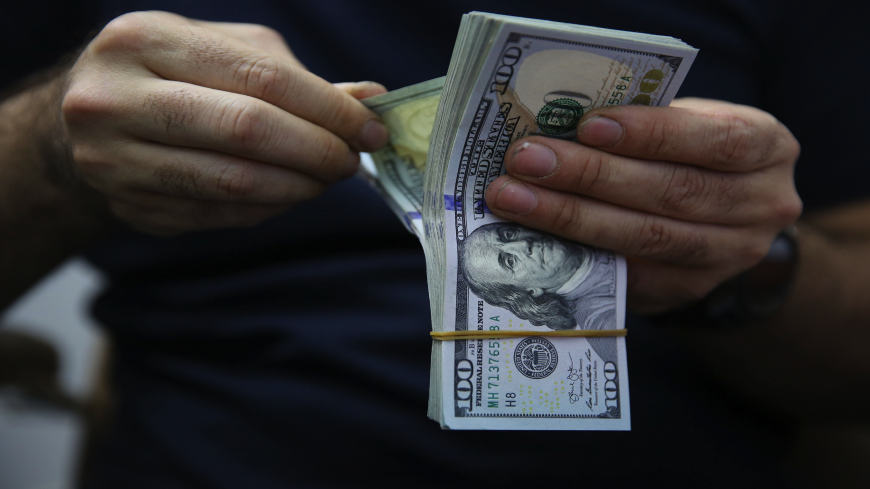 A man counts a pile of US dollar banknotes in the Iraqi capital, Baghdad, on May 4, 2020, during the coronavirus pandemic crisis. With its financial outlook darkening by the day, Iraq is considering slashing its massive public payroll, an unpopular move likely to renew protests. OPEC's second-largest producer has been hit hard by the double-whammy of collapsed crude prices and the COVID-19 pandemic, which have hacked at its revenues from oil sales. - AHMAD AL-RUBAYE/AFP via Getty Images

The Iraqi parliament’s Finance Committee on Nov. 28 called on the government to impose a 12% value-added tax beginning in 2021.

The call has raised popular anger and criticism as it comes during a devastating financial crisis — which is a result of the COVID-19 pandemic — and low oil prices, and amid concerns that the taxes collected are used to finance the parties and militias controlling the country.

Iraq already collects four types of taxes — sales, income, transfer of property and corporate — with rates ranging from 10-35%, but most of them are inactive. Some taxes are only imposed on large companies such as telecom companies, banks and foreign oil companies. Taxes constitute 2% of the gross domestic product.

Director-general of the General Tax Authority Shaker al-Zubaidi told Al-Monitor that bureaucracy and corruption have led to a decrease in tax revenues in the past years, since some companies that have been working in Iraq since 1999 have never paid taxes. He explained that the taxes are collected from companies following an audit of its budget by a foreign audit firm and Iraq’s General Tax Authority.

Zubaidi said he took a series of measures that have helped improve tax revenues by canceling the external auditing process and relying instead on the budget sheet submitted by the company. He explained that from the beginning of this year until the end of November, tax revenues amounted to 3.4 trillion Iraqi dinars ($2.65 billion) in light of the lockdown and the reduced working hours due to the coronavirus. He said tax revenues amounted to 3.1 trillion dinars ($2.4 billion) last year.

He revealed a plan to be implemented next year that includes imposing the 10% sales tax on all commercial centers, markets, hotels and restaurants, after being included in the budget law. He added, however, that there are several problems that may hinder the implementation of this tax, such as the lack of electronic payment devices in the markets and citizens’ lack of awareness of taxes and electronic payments as most Iraqis still use cash.

The Finance Committee is seeking to increase several types of taxes by adding a tax on cars and leased real estate, adjusting tax rates by raising them, and including all working Iraqis in the tax payment system. Only employees working at large companies currently pay income tax.

Faisal al-Issawi, a member of the Finance Committee, told Al-Monitor, “The reform paper released by the committee will be included in the 2021 budget law, and we will force the government to implement it. [The reform paper] includes solving the tax problem.”

Issawi said the government must activate taxes by tasking companies in the private sector with collecting the taxes under the supervision of the General Tax Authority. He said his committee will force the government to establish a tax fund to ensure that tax money is not paid as salaries for state employees, but rather is used to support investment and development projects such as building hospitals, universities, ports and roads.

Mustafa al-Kadhimi’s government had issued a decision June 11 to include the total salaries of employees and retirees by deducting the income tax that ranges between 5-20%. But the decision was retracted hours later under popular pressure. The General Tax Authority collects an income tax on nominal wages only, with the exception of allowances that include twice the nominal wages due to enforced laws.

Issawi stressed that tax reform requires strong will, despite popular rejection. “We must work with the government to advance this file that will contribute to developing the economy and increasing services.”

In 2015, the government of Haider al-Abadi failed to implement the sales tax after the owners of malls refused to pay them, fearing people would stop buying because of a 10% increase in prices and would instead resort to popular markets. A decline in the purchasing power of citizens would lead to a recession in light of the financial crisis that Iraq is currently witnessing.

There are concerns that imposing taxes on Iraqis will harm the poor, and companies will make citizens pay for them indirectly by increasing the prices of goods. This is what happened when the government imposed a 20% telecommunications tax, following which telecom companies raised the prices of prepaid cards by 20%. Therefore, the state must implement a set of tax exemptions due to the poverty rate, as well as exemptions on goods and services such as children's clothing and books.

Jawad al-Rubaie, who drives a truck to transport goods between the Kurdistan Region, Baghdad and the southern governorates, criticized the government’s plan to impose new taxes, saying the tax money will go to the corrupt. He told Al-Monitor, “The militias, in agreement with the Salahuddin local government, collect $13 from each truck that passes through the main road belonging to the government governorate and not to the investors. Cars can barely cross this road that lacks infrastructure, causing the deaths of dozens of people.” He added, “This money goes to well-known Shiite and Sunni political parties, and it is a royalty without any legal basis.”

Rubaie noted that imposing taxes means the money will go into the pockets of the corrupt and the parties, which will tighten the noose on the citizens’ livelihoods — and those citizens will immediately reject those taxes.

The government finds it difficult to collect taxes, since more than 77% of adult Iraqis do not have bank accounts and deal only in cash, and most businesses operate without licenses. Meanwhile, tax evasion is flourishing amid rampant financial and administrative corruption. Also, employees tasked with assessing the transfer of property tax receive $400 from property owners to reduce the tax from $10,000 to $5,000, causing the state to lose billions of dollars.