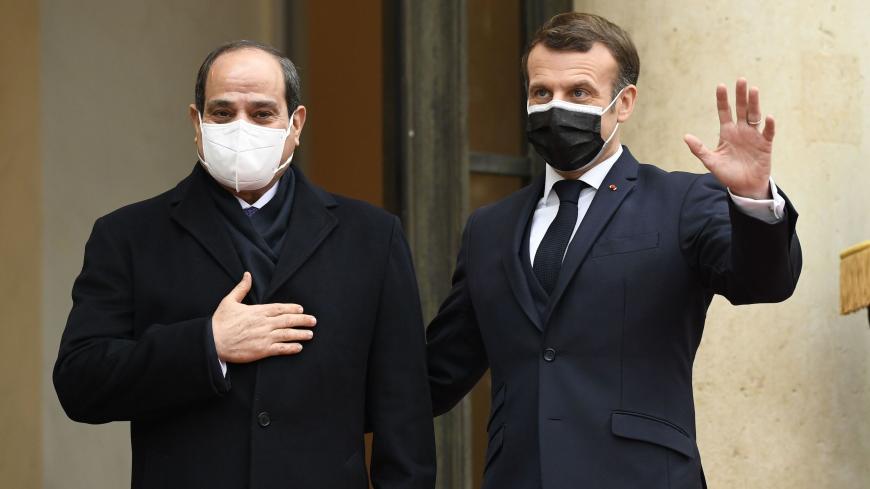 "I will not condition matters of defense and economic cooperation on these disagreements," Macron said during a joint remarks with President Abdel Fattah al-Sisi at the Elysee Palace in Paris.

"It is more effective to have a policy of demanding dialogue than a boycott, which would only reduce the effectiveness of one of our partners in the fight against terrorism," he said.

Macron has in the past justified weapons sales by saying Egypt would turn to Russia and China for arms if spurned by France. He’s also stressed Egypt’s role as a counterterrorism partner in the region, where the North African country is fending off an insurgency in northern Sinai and backing renegade commander Khalifa Hifter’s forces in Libya.

Macron on Monday said he spoke “frankly” with Sisi about human rights "as one does among friends.” The French president said he raised a number of cases with his Egyptian counterpart, including the continued detention of Palestinian-Egyptian activist Ramy Shaath, whose wife is a French citizen.

Since coming to power in 2013, rights groups have documented Sisi's alarming and sustained assault on fundamental freedoms in Egypt. Security forces have arrested tens of thousands of political opponents, journalists, academics and other perceived critics, according to monitoring groups.

Amnesty International said in a report last week that Egypt had executed at least 57 men and women between October and November in what the London-based group called a “horrifying execution spree.”

US President-elect Joe Biden has vowed a tougher approach to Egypt that involves “no more blank checks.” At $1.3 billion annually, Egypt remains the second-largest recipient of US military aid after Israel. Rights groups have urged the incoming administration to impose human rights conditions on the annual national security assistance package.