Although some in Turkey see Russia as the real winner of the Russian-brokered truce between Armenia and Azerbaijan, the deal has elevated Turkey to a regional power in the south Caucasus. 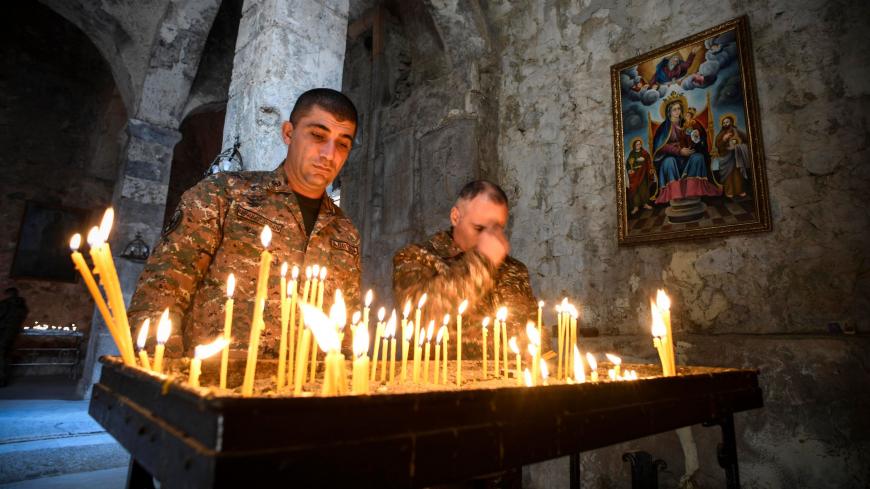 Armenian soldiers light candles as they pay a final tribute to fallen comrades at the 12th-13th century Orthodox Dadivank Monastery on the outskirts of Kalbajar on Nov. 12, 2020, during the military conflict between Armenia and Azerbaijan over the breakaway region of Nagorno-Karabakh. - ALEXANDER NEMENOV/AFP via Getty Images

The losers of the six-week war between Armenia and Azerbaijan are beyond any doubt Armenia and Karabakh Armenians. Turkey is among the winners, though who won what and how are matters of debate, particularly Ankara’s gains.

The content of the Nov. 10 cease-fire deal has provided an opportunity for me to share some exclusive information in the history of the Nagorno-Karabakh conflict that has remained unbeknown to the public until today.

In February 1992, Turkish President Turgut Ozal entrusted me to carry his “dual corridor” proposal to Azeri President Ayaz Mutalibov. The proposal aimed to resolve the then-relatively new Nagorno-Karabakh conflict through a plan that foresaw a swap of territory between Azerbaijan and Armenia — both former Soviet republics that had recently become independent.

Under the deal, a corridor was to be set up along the Azerbaijani land of Lachin linking the heavily Armenian-populated Karabakh enclave to Armenia. In return, the Nakhichevan Autonomous Republic, an Azeri exclave separated from the mainland by a strip of Armenian land with which Turkey shares a six-mile (10-kilometer) border was going to be linked to the Azeri mainland through a 27-mile (43-kilometer) corridor along the Armenian territory of Zangezur, also known as Meghri. The Meghri region is of geostrategic importance for Armenia due to its location on the Iranian border.

In addition to settling the Nagorno-Karabakh conflict, Ozal was also aiming to advance Turkey’s interests. By linking Turkey to Azerbaijan through Nakhichevan, the plan was to connect Turkey to the Caspian Sea and newly independent Central Asian Turkic republics beyond it.

Potential economic and commercial opportunities in the rapidly developing post-Cold War countries aside, Turkey would also have extended its area of influence, becoming a significant regional power.

“Tell Mutalibov that if he agrees to the ‘dual corridor’ plan, I can get the American endorsement for that,” Ozal told me in our private conversation.

I later learned that the proposed deal had been previously discussed between Ozal and George H. W. Bush during the latter’s visit to Turkey in July 1991.

According to the excerpts of their conversation published by ANI Armenian Research Center, Bush asked Ozal what would happen to the Armenians in the Meghri area should the plan go into effect.

“All together, not more than 50,000 people would have to be moved. Otherwise, this war will continue forever,” Ozal was quoted as saying in response, adding that the plan would render new Turkic republics more “independent of Russia” by strengthening their ties with Turkey. “Bush wondered if Azerbaijan might be interested in such a land swap and said that [the] US would consider a ‘follow-up,’” according to the excerpts.

As there were no flights at the time between Turkey and Azerbaijan, I hit the road immediately. After a frantic two-day journey, I reached Baku through Georgia to meet Mutalibov, the first president of the Azerbaijan Republic after its independence from the Soviets. Mutalibov was a former communist chief who had been widely seen as Moscow’s man.

The cover for our meeting was to interview him as a journalist for a Turkish newspaper. After the interview, I disclosed the real intention of my visit, conveying him Ozal’s proposal. I stressed that the president of the United States was also expected to be on board with the plan should he accept it.

Mutalibov, with no hesitation or consideration, turned it down. He told me, “Lachin is ours. Zangezur is also ours. It is an Azerbaijani territory. It was seized from Azerbaijan in 1920 unjustly. We must recover it. Why should we concede our Lachin in order to recover our Zangezur?”

He asked me to convey a message to Ozal, asking his Turkish counterpart not to assist Heydar Aliyev, who was then speaker of the Nakhichevan Parliament.

“Aliyev is very ambitious. He cannot stay in Nakhichevan. He wants Baku. Mr. Ozal should understand Aliyev’s real motives,” he told me. Aliyev, who is also the father of Ilham Aliyev — the current Azeri president — became the president of Azerbaijan a few years later in 1993.

A month after our meeting, Mutalibov was forced to resign as a result of public pressure over the Azeri territorial losses and an ensuing massacre perpetrated by Armenians in Karabakh. Since then, I have never disclosed this meeting and Ozal’s land swap deal until now.

After assuming the presidency in 1993, Heydar Aliyev had revived the idea of the land swap solution in his talks with his Armenian counterpart Robert Kocharyan of Karabakh origin. Although Kocharyan refused to hand over Meghri, the two leaders had agreed on a “sovereign corridor” that would link Nakhichevan with Azerbaijan via a highway in southern Armenia. In return, Azerbaijan would recognize Nagorno-Karabakh, including the Lachin region, as an Armenian territory. But Aliyev stepped away from the plan in 2001, during a summit held in the United States for the settlement of the Nagorno-Karabakh conflict.

Coincidentally, the Americans had a settlement proposal that was similar to Ozal's initiative. The proposal, known as the “Goble Plan” after former US State Department official Paul Goble, envisaged leaving Karabakh and Lachin to Armenia in exchange for the handover of the Meghri area to the Azeris.

However, the Armenians have remained opposed to a Meghri corridor linking Nakhichevan and the Azerbaijani mainland in what one Armenian analyst described as the “Pan-Turkish Superhighway.”

Judging by the sixth and ninth provisions of the Russian-brokered Nov. 10 deal between the two sides, the deal is similar to ones that had been separately offered to Armenian and Azeris by the United States and Turkey decades ago. Under the sixth provision, Armenia will return control of the Lachin region to Azerbaijan and a Russian peacekeeping mission will be deployed along the Lachin corridor. The ninth provision calls for a secure link between Nakhichevan and Azerbaijan and for the corridor to be secured by Russian border guards.

Thus, in a sense, we are back to the dual corridor plan of almost 30 years ago, but with the addition of Russians boots on the ground. However, it would be hasty and erroneous to conclude that Russia is the winner of the six-week war between Armenian and Azeri forces.

The New York Times described the truce as “a reordering of regional powers,” adding that “behind the day’s drama lay the growing regional power of Turkey.”

Some Russian pundits went as far as counting Russia among the losers. The Financial Times quoted Ruslan Pukhov, director of a Russian defense think tank as follows in its Nov. 12 report: "The geopolitical consequences are disastrous not only for Armenia but also for Russia.”

"The Russians’ client and ally was the loser. The Turkish ally won convincingly. … The harsh reality is that Moscow’s influence in the trans-Caucasus region has sharply decreased, while the prestige of a successful and pugnacious Turkey, on the contrary, has grown incredibly,” Pukhov told the newspaper.

In conclusion, there is a new no war-no peace situation in the south Caucasus in which Armenia will be more dependent on Russia than ever and Azerbaijan, Turkey and Russia are obliged to coordinate with each other to maintain the new regional balance of power.