The city’s traditional fall art season is underway as curators take new approaches to exhibit work safely and sustainably during the coronavirus pandemic, despite confusing government restrictions about what would be allowed to go ahead. 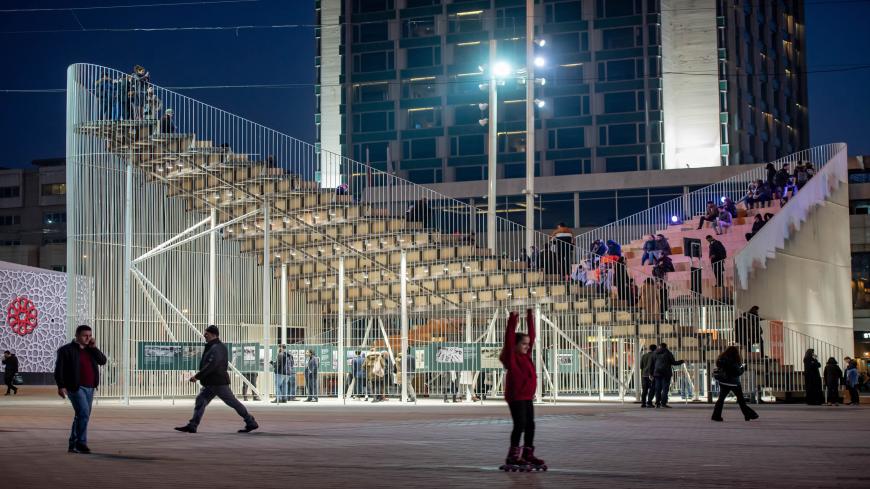 Istanbul’s art community has rolled up its sleeves this fall to make sure the shows go on, even as government restrictions to curb the coronavirus outbreak and worries about public health threatened to shelve the traditional art season.

Curators have moved exhibitions outdoors and online, collaborating with institutions across borders and focusing on local artists and audiences, making their exhibitions safer and more sustainable in the process.

Not least among the challenges have been the government’s shifting rules as it grapples with a second peak in the outbreak, which has killed more than 11,200 people in Turkey. The Interior Ministry issued a series of decrees in September and October that barred public gatherings, stoking uncertainty about whether cultural events could proceed.

Organizers of the fifth edition of the Design Biennial, the flagship event on the fall art calendar this year, weighed rescheduling but instead reconfigured the show, reducing the scale and expanding it over several months.

“We decided to adapt to the circumstances and use this opportunity to question our practices,” said curator Mariana Pestana. “A biennale without travel and transport can be more ecological. Mostly locally produced, it can become generative rather than showing existing works — a chance for new projects to be developed. This biennale includes more of the local context … to include more agents in the conversations that we are starting here in the city.”

Called “Empathy Revisited: Designs for more than one,” the theme feels more urgent than ever. For all the pain the coronavirus pandemic has wrought, scientists are also studying the outpouring of compassion and cooperation among neighbors and, sometimes, nations as the disease touches millions of lives across the world.

The biennale’s 50 or so works make up its three main branches: an online series; installations at two galleries and at outdoor sites around the city in New Civic Rituals; and research projects on the Mediterranean basin at the Library of Land and Sea, housed at Ark Kultur. While indoor installations wrapped this weekend, the projects at Ark Kultur are meant to serve as a starting point for further investigation, said Sumitra Upham, the biennale’s curator of programs.

“We wanted to give the projects the time they required and are less concerned with showing results. What you see now is the beginning of a conversation with research projects that will continue for the next six months,” she said.

Architect and urbanist Aslihan Demirtas’ “Agros Istanbul” studies the city’s ancient market gardens, which have been largely wiped out by a two-decade construction boom that has transformed Istanbul. Tirilab travels to northwest Greece’s Thesprotia and its co-op kitchens, where women have cooked together for decades, to question what was lost after the world retreated into autonomous household kitchens. “This is very much a celebration of communal eating where communities feed each other,” Upham said.

Visitors can still see outdoor installations, including Sobya’t Thawra, or Revolution Stove by architectural office Bits to Atoms, built for anti-government protests that erupted in Beirut in 2019. The simple wood stove met basic cooking and heating needs last winter, serving as the hearth of the resistance, and the replica situated along the Golden Horn was manufactured locally from an open-source file.

Quarantine has warped our sense of time, blending days together and erasing hours off the clock. That fluidity prompted the biennale to stretch many of the outdoor interventions across the city through May 2021.

“A more flexible structure allowed us to persist in holding the biennale, and it became more important to do it rather than postpone it as we understood that this situation is not going to pass. We have to learn to live with it,” said Deniz Ova, the Design Biennial’s director. “This is also a moment for all institutions to rethink sustainability, a conversation we were having even before the pandemic.”

People staying at home can tune into the Critical Cooking Show on YouTube, a conscientious twist on TV food programs that have only grown more popular during lockdowns. The latest episode, “The Avocado Toast,” documents how the world’s insatiable appetite for the Latin American staple prompted the Chilean government to deregulate agriculture and unleash environmental harm.

At another show this month, bread is the foodstuff through which Turkish artist Burak Delier reconsiders our relationship with power. In his work “Maya,” Delier filmed the fermentation process of yeast, while subjecting it to footage of violence: forest fires and military operations in southeastern Turkey, a police crackdown at a political protest and the 1955 pogrom in Istanbul that sparked the exodus of most of its Christian citizens.

Installed at a former bakery in a neighborhood where some Christians remain, “Maya” is part of the group show “A Few in Many Places” that spans five cities around the world through Nov. 28, presented by Istanbul-based art nonprofit Protocinema. The works are linked through social media and a zine available at each space that features essays on the art by writers in far-flung cities.

“Instead of being oppressed and heavily distracted by what we can’t do in 2020, we thought about what we can do. We can go to the bakery, we can go to a friend’s house and we can work with artists wherever they are,” said Mari Spirito, the show’s curator and director of Protocinema.

It has not been easy. The gallery that was to display conceptual artist Stephanie Saade’s “A Discreet Intruder” in Beirut was destroyed in August at the devastating port explosion. Michelle Lopez’s “Keep Their Heads Ringin” in Philadelphia relocated to a church after failing to get permission to display at the historic Liberty Bell, perhaps due to concerns about public meetings during the contentious US presidential election.

For at least one Istanbul event, the government’s restrictions proved too disruptive. “Remote Istanbul,” an interactive play in which an artificial intelligence-generated voice leads participants on a walking tour of the district of Kadikoy, suspended performances until spring 2021 due to coronavirus measures. It is actually the perfect coronavirus antidote as people turn to perambulation to stave off the boredom, frustration and extra pounds incurred by the pandemic.

The bespoke tour, designed by German theater group Rimini Protokoll, brings strangers together at a small park where they don headphones and submit to the alien voice that shepherds them through a shopping mall, carparks, the metro and a Greek Orthodox church. Trust, the voice reminds participants, is what will see us through these troubled times.