With Saudi Arabia’s new social reform plan the local art scene is blooming with a plethora of cultural initiatives. 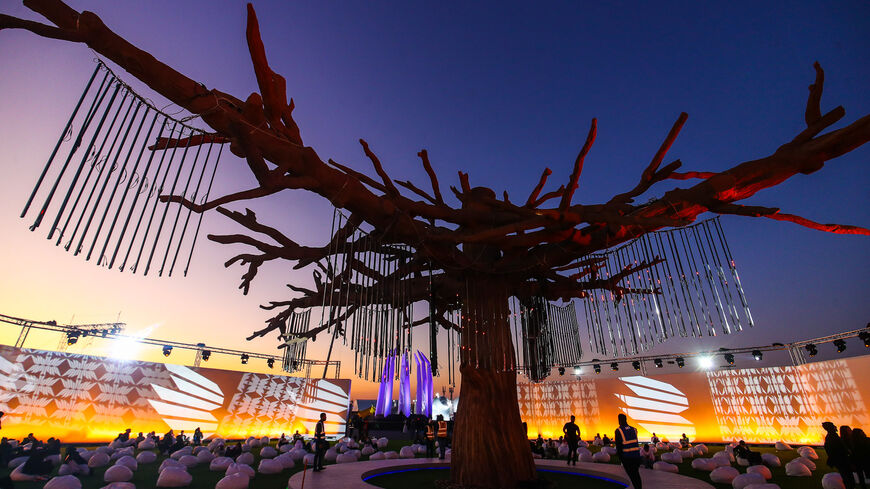 In this handout image provided by MD Beast, MDL Beast Festival - the Saudi Soundstorm has arrived, wowing over 130,000 fans on its first day on Dec. 19, 2019 in Riyadh, Saudi Arabia. - Matt Crossik/MD Beast via Getty Images

A big black feathered animal traverses the space of the Arsenale at the Venice Biennale, the biggest event of the art world, where each country presents the very best of their art scenes.

Called “The Teaching Tree,”,the petrol-colored creature is the artwork that Saudi Arabia has chosen. It’s 260 square meters of woven dried palm leaves dyed black, undulating thanks to a pneumatic machine, giving the impression of breathing.

Saudi artist Muhannad Shono, one of the most active members of the growing Saudi art scene, conceived it as a visual metaphor for the country's socio-political and cultural transformation.

“Escaping from the dark ages” is how many Saudi artists refer to the country's emergence from a period of cultural obscurity. Following a similar strategy to neighbors such as the Emirates, Saudi Arabia Crown Prince Mohammed bin Salman is trying to diversify the economy which has been mostly reliant on oil and gas revenues.

With the new social reform plan called Vision 2030, many hope the restrictions limiting artists' expression will be eased, and artists and curators will finally have more room to touch on themes like Islam, Saudi society and the monarchy.

So far, the flourishing of the art scene is almost single-handedly funded by the state, directly linked to the government’s projected $64 billion investment, in partnership with the private sector, into cultural infrastructure over the coming decade. The Ministry of Culture, created in 2018, is launching 11 specialized agencies encompassing music, museums, and performing arts.

The visual art sector in the last couple of years has seen an unprecedented amount of programming despite the pandemic: the Diriyah Biennale, the important opening of the art center Hayy Jameel, the Tuwaiq sculpture commissions for public art in Riyadh; Misk Art Week’s exhibitions, and discursive programs; the Jeddah edition of the Bienal Del Sur; the Red Sea International Film Festival; various pop-up events, an art fair, Shara Art + Design, and the second edition of Desert X Al Ula.

However, the state is not starting these initiatives in a complete vacuum, but rather adding to a small but significant environment that was already present.

In 2016, Saudi art patron and Libyan Princess Alia Al-Senussi wrote in the Oxford Gulf and Arabian Peninsula Studies Forum (OxGAPS) that grassroots Saudi art is "often tied to traditional centers of artistic production like the Abha arts community or the Hijaz, a crossroads of pilgrims and commerce.” but “Despite its grassroots origins, something uniquely Saudi, art continues to be patronized and overseen by the kingdom’s ruling elite.”

Saudi’s main cities of Jeddah and Riyadh are the center of the new art scene. “Riyadh is being positioned as the future, Jeddah may soon be relegated to the realm of tradition,” points out writer Rahel Aima in ArtForum “The Diriyah Contemporary Art Biennale, for instance, is set in Riyadh, while its Islamic art editions, happening during alternate years, will take place in Jeddah.”

To Sara Al Omran, Deputy Director of Art Jameel, a Jeddah and Dubai-based organization founded by the Jameel family, the difference between Jeddah’s art scene and Riyadh’s is one that complements: “We view the ebb and flow and exchange of ideas from the center to the coast as incredibly enriching for the arts,” she says to Al-Monitor.

“Filwa Nazer is a Jeddah-based artist whose work has been widely shown and celebrated in Riyadh; she will now be in residence in Hayy Studios for six months. The exhibition includes a newly commissioned interactive, performative work by Sarah Brahim, a Riyadh-based artist.”

Jeddah’s art tradition dates back to the 1970s, when mayor Mohammed Said Farsi transformed the city through an urbanist redevelopment scheme focused on public art. He commissioned several public sculptures with the idea of turning Jeddah into an open-air museum. Many of the works on display are international big names, including Henry Moore and Juan Miró. Some are gathered at the Jeddah Sculpture Museum in Jeddah Corniche.

Many private galleries are also very active. Athr, a staple in all the main art fairs since its foundation eight years ago, has provided both established artists, such as Ahmed Mater and Basmah Felemban, and the up-and-coming Saudi artist a platform for international exposure.

“For a long time the gallery was one of the very few gateways for Saudi art internationally and a catalyst for the art scene locally,” says gallery director Alia Fattouh to Whitewall “People didn’t know that Saudi artists existed. We worked with artists and supported going to residencies, participated in leading art fairs and panel discussions, forums, and summits, and placed artists in museum collections and exhibitions.”

Photo 2022, a project launched in March at the gallery, showcases a variety of images including some of the earliest photographic experiments, modern classics, and innovative contemporary artworks. Titled “The Time is Right,” it reflects the fragile balance of humans’ relationship with the natural world through the work of established Saudi artists such as Manal Al-Dowayan, Mohammed Al-Faraj, Marwah Al-Mugait, Moath Alofi, Fahad bin Naif, but also emerging Saudi photographers.

The new private art institution Hayy Jameel is “a destination as well as a platform that encourages the exchange of ideas between different disciplines,” Al Omran told Al-Monitor. Located in a residential neighborhood, close to schools and a jazz music center, “the community remains at the heart of our programming.”

The art developments in the capital Riyadh seem much more institutionalized. Vision 2030 seeks to transform the capital into a vibrant, cosmopolitan city, launching one of the largest public art programs in the world today.

One of the initiatives is called “Riyadh Art Hub” and consists of an immersive creative space. Located at Riyadh Front, the hub runs daily activities, twice-monthly workshops, and a monthly discussion.

However, the biggest event of this year took place in the JAX district, a light industrial neighborhood re-invented as a creative district near the archaeological site of Diriyah, just outside the city. The first edition of the Ad-Diriyah Biennale, titled "Feeling the Stones," took place from December 2021 to March 2022.

The curator, Philip Tinari, visited both Riyadh and Jeddah three times to meet with artists and arts professionals. In the official press release, Tinari states that the event exposed new generations of viewers to global contemporary art, not just as a mode of visual expression but as a space for critical thinking — especially in a country that has not yet developed a full-fledged art system.

When asked about censorship, Tinari is cautious "The opportunity is to do as much as can be done at this time and in this place."

Venice Biennale artist Muhannad Shono, who grew his art practice while Saudi Arabia was even more restricted, still sees limitations, but he doesn't consider them to be necessarily harmful. “They actually create more fertile grounds and stronger forms of expression,” says the Riyadh-based artist to the National "If you live in a society that's equitable and fair, that's nice. But what happens to art and expression? It diminishes because there's nothing to push against.”

He speaks of his work and his participation at the Venice Biennale as a statement: “It's a timeline, a journey, not only my story but a collective, irrepressible kind of expression that's happening now in Saudi being reborn.”