Turkey’s continued cold war with the Saudi bloc is adding fuel to the brewing conflict in Western Sahara between Algeria and Morocco. 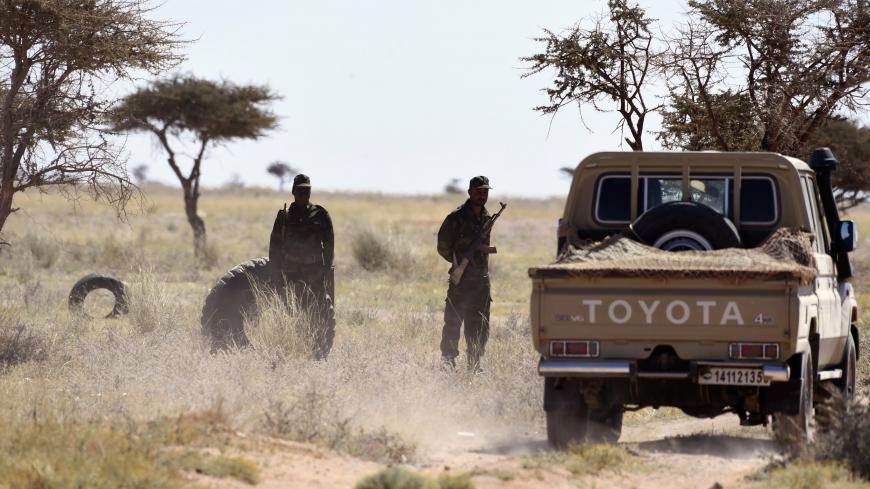 Members of the Polisario Front stand guard during a visit by the United Nations chief on March 5, 2016, in Bir-Lahlou, in the disputed territory of Western Sahara. - FAROUK BATICHE/AFP via Getty Images

The cold war between Saudi-led Arab states and Ankara is expanding to new territory. This is bad news for Turkish President Recep Tayyip Erdogan, who wanted to contain the tensions.

While Turkey hoped to improve ties through back door channels, Saudi Arabia began an unofficial boycott against Turkish goods, services and all things Turkish. Turkey fears other Arab countries, except for its sole ally Qatar, will be pressured to join.

Still, Qatar has its limits. Despite Erdogan’s choleric outburst against Abu Dhabi for normalizing relations with Israel, Doha reacted calmly, expressing respect for the sovereign decisions of Bahrain and the Emirates in line with Doha’s efforts to end the blockade.

A senior diplomat from the Turkish Ministry of Foreign Affairs told Al-Monitor on condition of anonymity, “Although we are confident Erdogan and Qatari emir will remain friends, we observe that Doha is scaling back not to confront its neighbors directly, which means we have to take more risks.”

One of these risks is growing in the Maghreb region. Turkey’s goal of expanding its investments in Africa means also strengthening ties with Algiers, Tunis and Rabat. However, losing friends has a domino effect in the Middle East. Turkey's battle with Saudi-led coalition has thrown up several roadblocks, mostly unacknowledged in the public sphere. In 2018, Jordan’sabrupt decisionto end the free trade agreement is still bitterly remembered in Ankara.

That said, Turkey is unremitting in its efforts to develop military and trade relations in the Arab world. One of these countries is Algeria. Erdogan had four official trips to Algiers, two as prime minister (2006 and 2013) and two as president (2014 and 2020). The 2006 signing of a friendship and cooperation agreement boosted trade and consolidated bilateral relations. In January 2020, Turkey and Algeria committed to increase their trade volume to $5 billion from $3.1 billion. Algeria is currently Turkey’s second largest trade partner in Africa. If all goes according to plan, Algeria could top Egypt.

A foreign diplomat serving in Algiers told Al-Monitor, “Turkey has over 750 companies here, employing almost 30,000 workers. Fuat Tosyali, a businessman known for his closeness to Erdogan, has run a major steel business here since 2007.” Tosyali’s website reads “leader of steel industry in Algeria.”

Algeria is the fourth largest supplier of natural gas to Turkey, and gas shipments are continuing smoothly despite rumors of a trade slowdown.

In 2019, Turkey waived visas requirements for all Algerian citizens younger than 15 or older than 65. The Turkish Cooperation and Coordination Agency (TIKA) is also quite active in Algeria. The agency has helped produce personal protective equipment in the country, supports children with autism there and arranges child care for survivors of abuse. One of the most prominent TIKA achievements is the renovation of the 17th century Ottoman-constructed Ketchaoua Mosque in northern Algiers known as the Casbah. This project is particularly important for Ankara, as it was converted to a cathedral during the 130 years of French rule. The mosque symbolizes a shared accomplishment by ultranationalists and Islamists. It is quite common to hear Ankara’s suits brag about the renovation as if it were a part of Algerian war of independence against France.

However, Algerians are focused less on nostalgia and more on the benefits of this friendship. During Algerian Foreign Minister Sabri Boukadoum’s September visit to Ankara, talks centered on increasing investment and trade opportunities as well as the Libyan crisis and rising tensions in the eastern Mediterranean region. Ankara and Algiers' interests align when it comes to supporting Libya’s internationally recognized Government of National Accord, a point where Algiers and Riyadh have diverged.

Ankara and Algiers share another common interest in their support for the Palestinian cause. However, Erdogan’s Muslim Brotherhood agenda finds little advocacy in Algiers, a country that has suffered Islamist violence since 1992. A conspicuous example of this disinterest is the Islamic State’s failed efforts to recruit fighters from Algeria, unlike other Maghreb countries.

Another thorny issue is Erdogan’s efforts to include Algeria in his strident criticism against France. While Erdogan called for a boycott French products, Algeria heavily relies on French exports. Erdogan’s periodic outbursts about French colonialism have traditionally angered Algerians, who prefer to keep their bilateral affairs separate. Award-winning Algerian writerKamel Daoud penned a searing letter to Erdogan in 2018 explaining Algerian resentments. It was ignored in Ankara.

Rabat's increasing cooperation with the Saudi bloc has forced Algeria and Turkey to strengthen their relations. In turn, Turkey's deepening ties with Algeria carry risks to its affairs with Rabat, as the region is prone to conflict.

The most imminent problem is Western Sahara, a disputed region controlled by Rabat. The Polisario Front is an Algerian-backed group that fights for the independence of the Sahrawi people and represents the Sahrawi Arab Democratic Republic from exile in Tindouf, Algeria. Algeria shares a 26-mile-long border with Western Sahara.

In late October, UAE announced it will open a consulate in Western Sahara, making it the first Arab nation to have representation in the area. Abu Dhabi’s recognition is a major boost for Morocco and a blow to Algiers.

In 2013 Erdogan said that Turkey does not and will never recognize or support the Polisario Front. Yet this refusal could reverse as trouble is brewing in the region. A 29-year-old cease-fire ended in November, raising the possibility that the Polisario Front could go to war with Morocco.

A senior AKP bureaucrat in the security establishment told Al-Monitor, “Before new Algerian President [Abdelmadjid Tebboune], we had good relations with Rabat because they were distant to Saudi Arabia. Yet, Tebboune tried to mend bridges with Riyadh. That was a risk Rabat could not take.”

The latest difficulties Turkish businesses are experiencing in Morocco are seen as a sign that Saudi boycott calls have been effective.

“Now we may have to make a choice,” added the bureaucrat, “because the military establishment in Algeria is strong and for Algiers support for the Polisario Front is crucial, especially if we want to sell them arms and drones.” However, this choice is not without cost for Ankara. Western Sahara Resource Watch refers to Turkey as the “biggest funder of occupation of Western Sahara.”

An Algerian retired general told Al-Monitor, “Algeria is a patient and hospitable country. In the 1960s even the American Black Panthers sought refuge here. But we are carefully watching Turkey’s investments in Laayoune [a major town in Western Sahara] and the rest of the occupied territories.”