The US president abruptly fired his defense secretary via Twitter after months of reports that Esper had fallen out of favor. 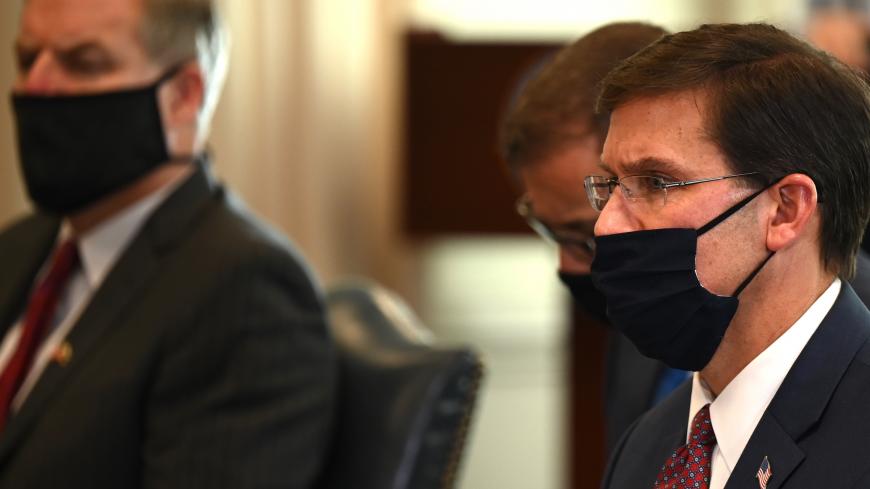 US Secretary of Defense Mark Esper meets with Bulgarian Minister of Defense Krasimir Karakachanov(not seen) at the Pentagon in Washington, DC, on October 6, 2020. - JIM WATSON/AFP via Getty Images

“Mark Esper has been terminated. I would like to thank him for his service,” Trump wrote.

Reports that Esper had earned the president’s disapproval have circulated for months. The two have publicly disagreed a handful of times since Esper took over for former Defense Secretary Jim Mattis in June last year.

Following the US killing of Iranian Maj. Gen. Qasem Soleimani in January, Esper said he had seen no evidence to support a claim Trump made on Fox News two days prior that Iran had been planning to attack four US embassies.

This past June, after Trump threatened to deploy active-duty troops to quell public protests in the United States, Esper said such a move “should only be used as a matter of last resort, and only in the most urgent and dire situations.”

“We are not in one of those situations now,” he said, as protesters demonstrated in cities across the United States following the death of George Floyd at the hands of police. Members of the 82nd Airborne were mobilized but not deployed to protests in Washington.

Esper also contradicted Trump’s unfounded claim that a massive blast that devastated Lebanon’s capital in August was caused by an attack. “Most believe it was an accident, as reported,” the defense secretary said the day after Trump’s remarks.

Last week NBC reported that Esper had prepared a resignation letter and was helping lawmakers in Congress draft legislation that would remove Confederate names from US military bases.

Trump has threatened to veto the 2021 defense spending bill if it includes language barring Confederate names from US military installations.

Esper's time at the top of the Pentagon was marked by a strategic pivot away from tamping down insurgencies in the Middle East toward countering more conventional rivals like Russia and China.

Esper is the latest in a running line of officials to be ousted from the Trump administration. His predecessor, US Marine Corps Gen. James Mattis, quit in protest of Trump’s decision to unilaterally abandon the US-led coalition’s Kurdish partner force in Syria in December 2018.

"[I]t is well known that periods of presidential transition leave our country exposed to unique threats," Rep. Smith said in a statement. "Until President-elect [Joe] Biden is sworn into office next January, it is imperative that the Pentagon remain under stable, experienced leadership."

On Saturday, the Associated Press and several other major news agencies declared Biden the winner of the 2020 presidential race, although Trump has not conceded. Michelle Flournoy is widely reported to be among the Biden team’s top pick for defense secretary.