Qatar has signed an agreement with the Tripoli-based Libyan government to build and train military forces in what some see as an attempt to undermine the current progress toward a political solution in Libya. 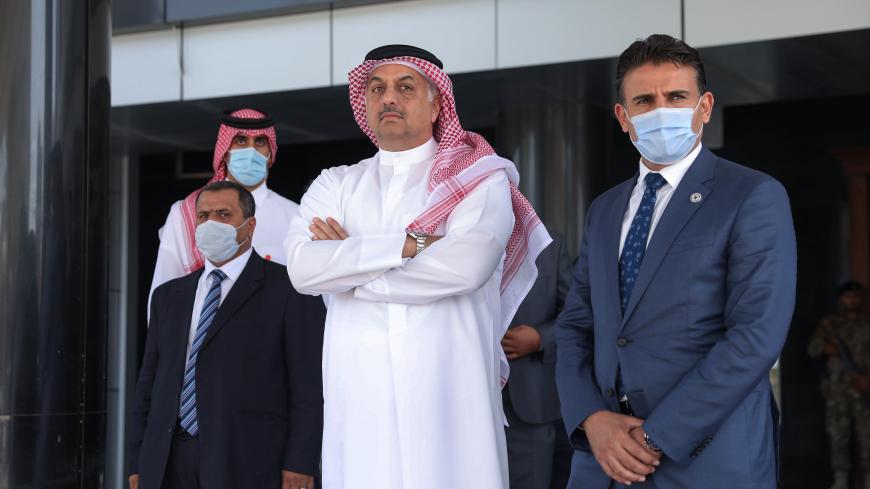 Qatari Defense Minister Khalid bin Muhammad al-Attiah (C) waits for the arrival of his Turkish counterpart to meet with Prime Minister of Libya's UN-recognized Government of National Accord Fayez al-Sarraj (unseen) in the capital Tripoli, on Aug. 17, 2020. - AFP via Getty Images

CAIRO — In what observers considered a new challenge for the 5+5 Joint Military Commission talks in Geneva and a desire to obstruct the peace endeavors between Libyan parties, Qatar signed a military agreement Nov. 13 with the Government of National Accord (GNA) based in western Libya to “train and build military capacities.” This step allows Qatar to boost its military presence on Libyan territories.

The agreement prompted many questions, especially coming after Libyan parties signed a permanent cease-fire in October after years of war and after the rival parties agreed to hold elections under UN auspices within 18 months.

In response to Qatar’s intervention to support the GNA militarily in its war against the Libyan National Army (LNA) based in the east and led by Khalifa Hifter, LNA spokesperson Ahmed al-Mesmari said in an Oct. 26 statement that any military agreements with the GNA are a violation of the outcomes of the 5+5 Joint Military Commission talks in Geneva and a hypocritical attempt to undermine what the parties agreed on in Switzerland, including the cease-fire and ending foreign intervention in Libyan affairs. Mesmari accused Qatar of using its agents in Libya to pass security agreements to support terrorism.

On Oct. 23, the UN Support Mission in Libya announced that the GNA and the LNA delegations signed a complete and permanent cease-fire agreement that stipulated the departure of all mercenaries and foreign fighters from Libya within three months and the suspension of all military training agreements in Libya.

Head of the Arab Organization for Human Rights in Libya Abdul Menhem al-Horr told Al-Monitor that the Qatari agreement is a clear violation of the cease-fire agreement.

On July 17, the Syrian Observatory for Human Rights revealed that Turkish intelligence forces had transferred more than 2,500 Islamic State members with Tunisian citizenship from Syrian territories to Libya in the past months on orders from the Turkish government.

Horr argued that the timing of the agreement is suspicious, as it was concluded only days after the cease-fire agreement and amid ongoing deliberations in Tunisia for holding the elections. It may point to hidden motives, as Qatar supplies the GNA with mercenaries and financial support without the need for any agreements, he added.

On Aug. 15, the Syrian Observatory for Human Rights reported that 400 Syrian mercenaries have gone to Qatar for training, to be later sent to Libya.

Meanwhile, Tunisia is hosting the Libyan Political Dialogue Forum to prepare for presidential and parliamentary elections.

Horr noted that Qatar is doing everything possible to foil the political process in Libya and stop the truce and give itself an influential role and presence in Libya and protect its interests in Libyan oil.

Military adviser at Nasser Military Academy Gamal Mazloum told Al-Monitor that Qatar has nothing to offer Libya since it does not have a strong military that qualifies it to train the GNA forces. It is only trying to maintain its pro-GNA militias before the formation of a new government.

Mazloum noted that Qatar’s other reason is ongoing support for the GNA alone and refusal to unite all parties under one umbrella, to perpetuate chaos and harm Egypt’s national security.

On July 9, Qatari Deputy Prime Minister and Minister of Foreign Affairs Sheikh Mohammed bin Abdulrahman Al-Thani said during a speech at a meeting of the UN Security Council that the only way to solve the Libyan crisis is through supporting the GNA.

Mazloum added, “Egypt is well aware of the dangers of such agreements and the Qatari and Turkish role in supporting militias in Libya. For that reason, it supported the Geneva negotiations and the Tunisia-sponsored talks, and it is proposing initiatives and holding meetings to unite the Libyan parties. But these attempts or initiatives will not succeed amid the deployment of armed militias.”

On June 6, Egyptian President Abdel Fattah al-Sisi announced an initiative to resolve the Libyan crisis that called for respect for international and UN initiatives, declaring a cease-fire and expelling foreign mercenaries from Libyan territories. However, it did not succeed.

On Oct. 23, the Egyptian Foreign Ministry welcomed the Geneva cease-fire agreement and affirmed Egypt's continuous support to ensure Libya's stability and preserve its sovereignty, underlining the importance of foreign forces leaving the country.

Mazloum continued, “Because Cairo’s initiatives did not succeed in achieving their goals, Egypt took a decisive stance when the militias, backed by Turkey and Qatar [were making progress against the LNA]. Egypt threatened military intervention to protect the Egyptian borders from infiltration.”

Mazloum concluded, “Qatar is largely at odds with Egypt, as it believes that the Egyptian regime thwarted its Muslim Brotherhood project with the fall of former President Mohammed Morsi and contributed with Saudi Arabia, the UAE and Bahrain to the blockade on it. Therefore, it is in Qatar’s interest to keep the situation unchanged.”