The announcement comes as the UN body is strained with increased demands and still reeling from a total funding withdrawal imposed by the Trump administration. 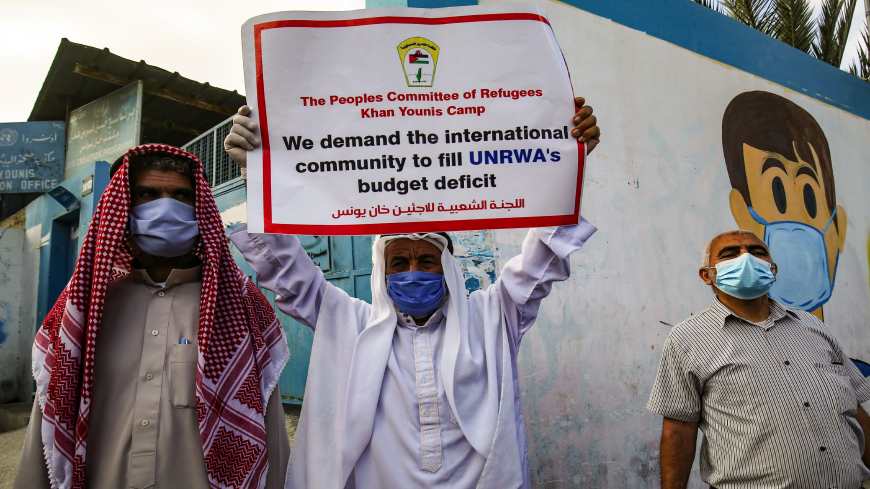 Palestinians wearing facemasks due to the coronavirus pandemic take part in a rally to protest against the reduction of the food basket provided by the United Nations Relief and Works Agency for Palestine Refugees in the Near East (UNRWA), in front of the agency's headquarters in the town of Khan Yunis in the Southern Gaza Strip, on Oct. 18, 2020. - SAID KHATIB/AFP via Getty Images

The UN agency for Palestinian refugees announced Monday it will not be able to pay the salaries of thousands of employees through the end of the year.

The UN Relief and Works Agency (UNRWA) notified its staff of 28,000 that due to budget shortfalls, it has run out of money to pay workers through November and December. Most of those affected are refugees themselves and based in Jordan, Lebanon, Syria and the West Bank, including East Jerusalem and the Gaza Strip.

The announcement comes as the UN body has strained to keep up with an increased demand for services, led by a growth in the number of registered Palestinian refugees as well as funding cuts by the United States and other donors.

Over the last five years, the UNRWA has reduced about $500 million out of its budget. Those cuts led to staff removals, a halt on repairs and infrastructure investments, increased classroom sizes to 50 students per teacher and reduced humanitarian assistance efforts. The agency said the global coronavirus pandemic has only aggravated an already difficult situation.

The UNRWA made headlines two years ago when the Trump administration eliminated all US funding to the agency over disagreements with the aid model and accusations the leadership was abusing their authority through an “exponentially expanding community of entitled beneficiaries.” The move reversed consistent US backing of the agency since its inception over 70 years ago.

“Palestinians, wherever they live, deserve better than an endlessly crisis-driven service provision model,” read a statement by US State Department spokesperson Heather Nauert.

Before the cuts, the United States had been providing the agency with $300 million a year. Their absence was filled by the European Union as well as individual states including Saudi Arabia, the United Arab Emirates and Kuwait, among others. But financial support this year has weakened.

US President-elect Joe Biden has said he plans on restoring Washington aid to Palestinians. On Sunday, in a statement congratulating Biden, Palestinian Authority President Mahmoud Abbas called on the incoming president to strengthen relations between Palestine and Washington.

But officials at the agency told Reuters they need immediate action and can’t wait until next year.

The UNRWA is the main UN body responsible for delivering assistance, education and protection to about 5.7 million Palestinian refugees. The agency launched a fundraising appeal in September to raise $94 million to combat the coronavirus crisis. According to an agency spokesperson for Reuters, about 60% of that goal had been reached.

The agency now needs $70 million by the end of this month to pay remaining staff as well as for education and health services, according to UNRWA Commissioner-General Philippe Lazzarini, as he called on UN member states to step up with monetary pledges.

“Without their income, UNRWA staff, the vast majority of whom are refugees themselves, will see their source of livelihoods disappear, and they are very likely to descend into deep poverty,” Lazzarini said.