Initial reports suggest the attack is the largest against Iraqi security forces in months. 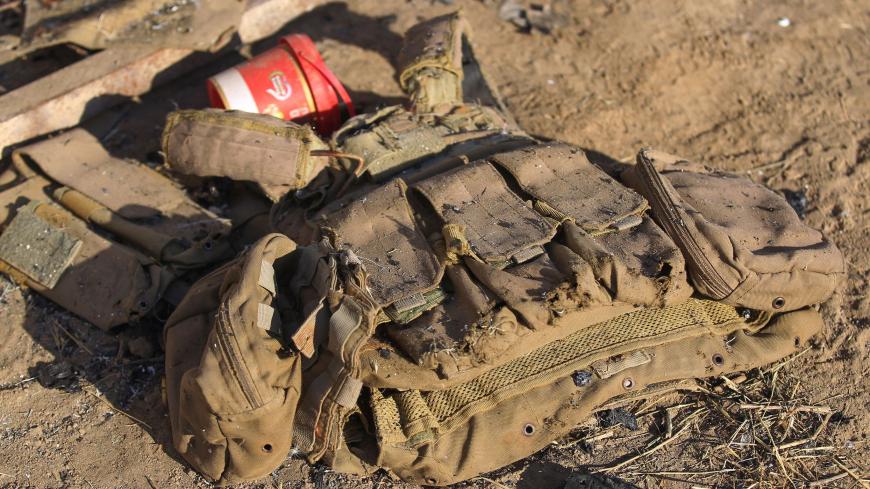 Damaged military gear is scattered on the ground at the site of an Islamic State attack a day earlier on the Popular Mobilization Units in Mukaishefah, about 180km (110 miles) north of the capital, on May 3, 2020. - AHMAD AL-RUBAYE/AFP via Getty Images

Eleven people were killed and eight wounded in a shootout with suspected Islamic State fighters at an Iraqi military position southwest of Baghdad on Sunday night.

Eight other people were wounded and sent to a hospital in Baghdad. An Iraqi security source told AFP that the attackers killed five PMU members at the monitoring tower, as well as six other people who had come to help defend the site.

The Islamic State has not claimed credit for the attack. It is unclear how many, if any, of the attackers were killed or wounded. A spokesperson for the Iraqi military did not immediately return Al-Monitor’s request for comment.

Saudi Arabia condemned the attack in a statement on Monday. The incident is the deadliest attack on Iraqi security forces in months. Last week at least four people were reportedly killed in two separate attacks in Kirkuk province. Also last week, IS claimed responsibility for an attack north of Baghdad that left a police officer dead.

Iraq declared victory over IS at the end of 2017. Last year the terror group surrendered its final territory to the US-led international military coalition and the Kurdish-led Syrian Democratic Forces near Baghouz, on the Euphrates River near Syria’s eastern border with Iraq.

Iraq’s Diyala province recently witnessed a particularly gruesome murder of a local sheikh, raising fears of the group’s lurking presence. The province has also seen regular guerrilla-style attacks on local military and security forces. Assassinations have continued in Syria’s eastern Deir ez-Zor province and in the Badia desert west of the Euphrates.

The US military says IS’ capabilities have been reduced to those of a low-level insurgency, though head of US Central Command Gen. Kenneth “Frank” McKenzie said in August that the group could regain momentum if the coalition and Iraqi security forces let up pressure too quickly.

The US-led coalition announced plans in September to reduce the number of American troops in Iraq from more than 5,000 to some 3,000.

The coalition has withdrawn over the last several months from satellite bases in Iraq’s provinces to provide centralized mentoring to Iraqi military commanders in Baghdad as part of the fourth phase of the coalition's fight against IS.