Local and foreign offices praised the late governor and called his death a great loss for the KRG. 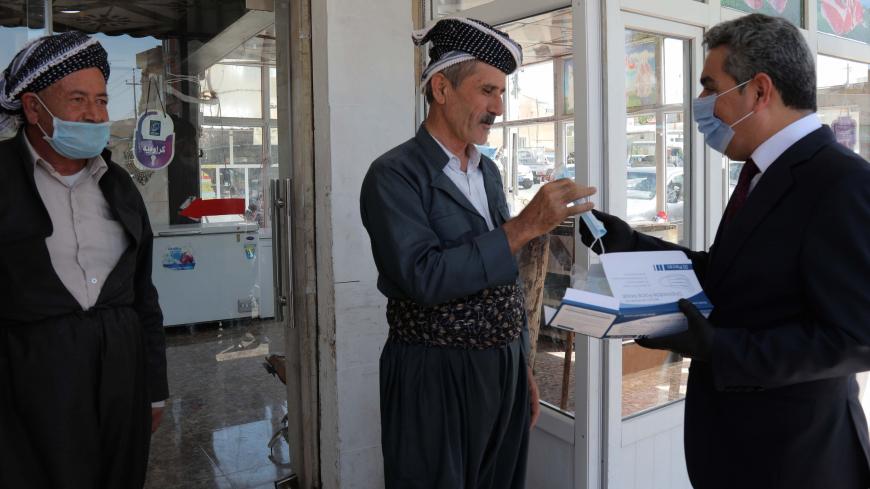 Erbil province Governor Firsat Sofi (R) gives masks to people to protect themselves against COVID-19, on June 4, 2020, in Erbil, the capital of the autonomous Kurdish region of northern Iraq. - SAFIN HAMED/AFP via Getty Images

The governor of Iraq's Erbil province died from the coronavirus early Wednesday in Ankara, Turkey, at the age of 42.

Firsat Sofi was elected in September 2019 in the province's first election of a new governor in 15 years. He represented the Kurdistan Democratic Party (KDP) in the regional parliament from 2013 to 2017 and was a member of the 2015 committee that drafted the Kurdistan Region’s constitution.

The governor contracted the virus in late October and as his condition worsened, he was flown to Turkey’s capital on Nov. 2 for treatment.

Erbil recorded 156 new cases of the virus and nine deaths Tuesday. That brings the total confirmed cases in the region to over 90,000 and nearly 3,000 deaths. Iraq is the second worst-hit country in the region  behind only Iran with a total of 526,852 recorded COVID-19 cases and 11,795 deaths, according to Worldometer.

Barzani hailed the late governor for “serving as a competent legal expert and a dedicated member of the parliament.”

Condolences for the governor were sent by local and foreign officials, including the governors of Sulaimaniyah and Dahuk provinces as well as from Rob Waller, the US consul general in Erbil.

“Sofi was an honest and hard-working individual,” wrote Ali Tatar, the governor of Dahuk.

KRG Prime Minister Masrour Barzani said in a statement that Sofi’s death is “a great loss for the KRG.”

“I have been closely aware of his loyalty, dedication and competencies in serving the city of Erbil and the Kurdistan Region,” the prime minister added, and later wrote in a tweet, “Kak Firsat’s legacy of service will endure through his contributions to all of our people, and to Erbil province in particular.”

Sofi’s body will be returned to the Kurdistan Region on Thursday and laid to rest in Erbil, according to the KRG. A ceremony will be held at the Erbil International Airport and attended by senior KRG officials, including Nechirvan Barzani and Deputy Prime Minister Qubad Talabani. Sofi is survived by his wife, two daughters and two sons.