The Dubai-based airline's revenues fell billions and it is relying on reserves and support from the government to continue flying. 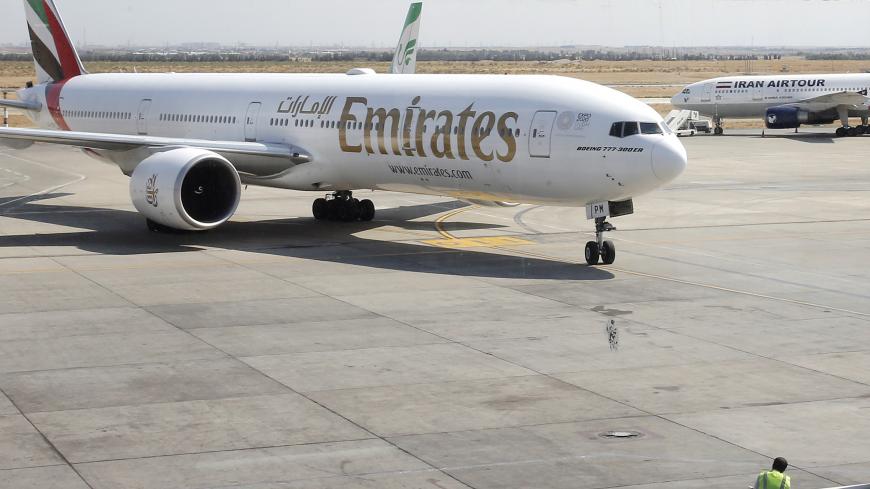 An Emirates Boeing 777-31H taxies upon arrival at Imam Khomeini International Airport in the Iranian capital, Tehran, on July 17, 2020. It was the first Emirates flight to land in Tehran following a five-month shutdown due to the novel coronavirus pandemic.

Emirates experienced more than $3 billion in losses this year due to the COVID-19 pandemic, the airline said Thursday. The Dubai-based company is receiving assistance from the government as it continues to fly and expand its network.

Emirates Group’s revenue for the first six months of fiscal year 2020-2021 went down a whopping 75% to $3.7 billion from $14.5 billion at the same time last year, the company announced in a press release Thursday. This period refers to April through the end of September. Emirates is a subsidiary of Emirates Group, which is in turn owned by the government of Dubai in the United Arab Emirates.

Emirates Group had not recorded a half-year loss in 30 years. The figures are a result of the crisis in global travel resulting from the coronavirus, its chairman and chief executive said.

“We began our current financial year amid a global lockdown when air passenger traffic was at a literal standstill,” said Sheikh Ahmed bin Saeed Al Maktoum in the statement. "In this unprecedented situation for the aviation and travel industry, the Emirates Group recorded a half-year loss for the first time in over 30 years.”

Emirates' revenues this year mostly came from cargo, according to Emirates Group.

Like other UAE airlines, Emirates suspended flights in March as the virus took hold around the region. It resumed passenger flights to a select list of destinations in May and has since then gradually rebuilt its network.

The Dubai carrier’s financial struggles are not new. The Dubai government gave Emirates $2 billion in August to help it stay in the skies. Emirates also offered employees unpaid leave in August and cut jobs in June. Other airlines in the Gulf, including Etihad Airways in Abu Dhabi, have faced similar issues.

There may be better days ahead for Emirates. Starting Saturday, visitors from the UAE to the United Kingdom will not need to isolate upon their arrival. This could boost tourism and flight bookings for the holiday season. Dubai also remains open to tourism amid limited travel destinations for people around the world.

Emirates may not immediately benefit from the blossoming economic ties between the UAE and Israel, as the budget airline flydubai is currently operating the Tel Aviv-Dubai route.

Maktoum said Emirates Group’s cash reserves and support for the Dubai government are enabling it to continue operating.