The Gulf state is under fire after women headed to Australia said they were forcibly searched in an attempt to see whether they had recently given birth to a newborn found alive in a trash can at Doha's airport. 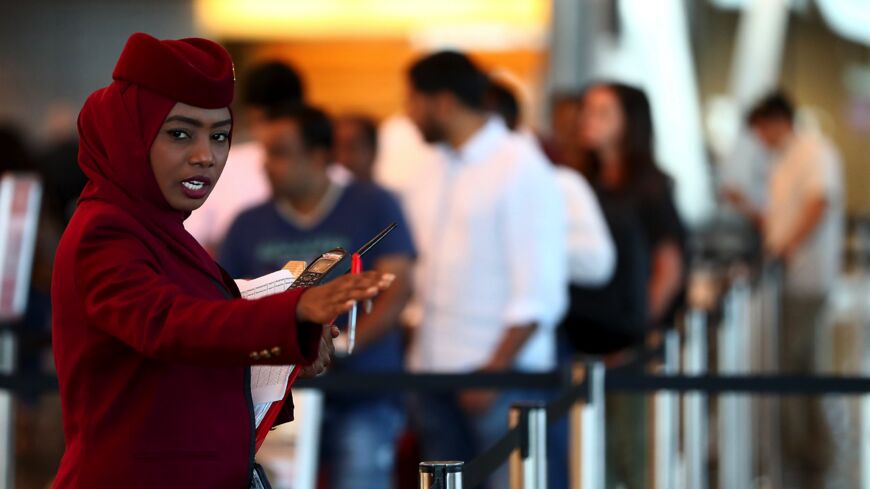 A stewardess directs passengers at the check-in area in the Hamad International Airport in the Qatari capital, Doha, on June 12, 2017. - KARIM JAAFAR/AFP via Getty Images

Qatar has expressed “regret” over the strip-search Australian and other women were subjected to ahead of flights leaving Doha this month. The Gulf state also released further details about the abandonment of a newborn in an airport trash can that led to the forced examinations.

On Oct. 2, the newborn girl was discovered alive in the trash can at Hamad International Airport in Doha in what the government described as a "horrible crime." In their quest to find the mother, authorities are reported to have inspected the genitals of female passengers without their consent to determine whether they had recently given birth. Australia, which had a number of citizens among those searched, condemned the inspections as “grossly, grossly disturbing” this week.

Australian Foreign Minister Marise Payne told an Australian Senate committee Wednesday that not only had 18 Australian women on Qatar Airways Flight QR908 to Sydney been subjected to the searches, but that female passengers on nine other flights were given the exams. Those other passengers included non-Australians, Payne said.

The Qatari government apologized and sought to explain its actions in a statement Wednesday. “The State of Qatar regrets any distress or infringement on the personal freedoms of any traveler caused by this action,” said the Government Communications Office.

The office also revealed new and disturbing details about the baby’s abandonment. The statement said, “A newborn infant was found in a trash can, concealed in a plastic bag and buried under garbage. … The baby girl was rescued from what appeared to be a shocking and appalling attempt to kill her.”

The statement said the female passengers were searched because their boarding areas were in the vicinity of the trash can in question. The government has now ordered an investigation into what happened to the women.

The baby is being cared for in Doha, according to the statement.