Israeli activists are rolling up their sleeves to clean nature, launching initiatives at nature reserves, parks, beaches and rivers. 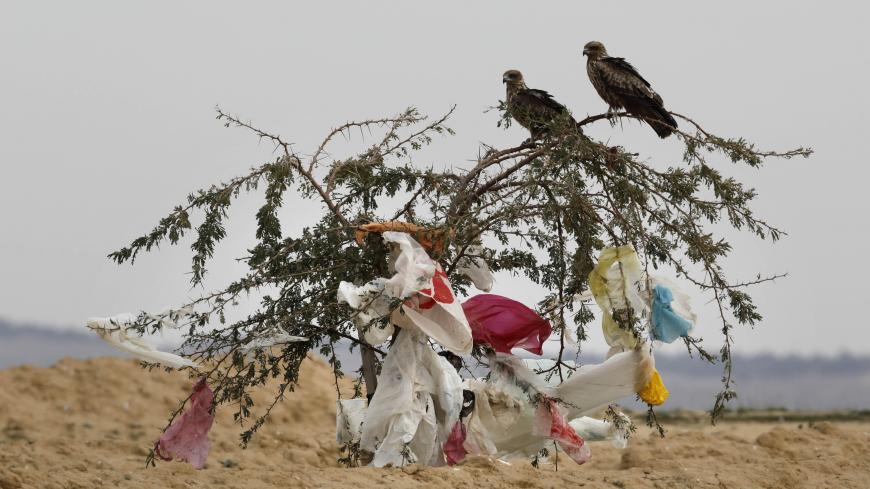 Black kites sit on a tree with plastic bags clinged to it after a storm near the Dudaim dump in the Negev Desert, near the Bedouin city of Rahat, Israel, Jan. 20, 2019. - MENAHEM KAHANA/AFP via Getty Images

Israelis spent this Sukkoth holiday confined at home. No partying on beaches, no picnics in parks, no swimming in rivers. While many regretted deeply not being able to go out, some Israelis were happy, as it meant nature was spared all the trash during this holiday week. Still, they fear that once the lockdown ends, and if the weather stays as warm and dry as it is now, Israelis will flock again outdoors, and bring along their rubbish.

Evidently, this phenomenon of trashing nature is not new to Israel. But it seems that the coronavirus pandemic has considerably amplified it. After the first lockdown in March, thousands of Israelis went out to visit every possible nature reserve, stream or trail. With the pandemic still raging, they could not fly abroad, so they opted for vacation at home, in Israel.

"This summer, family, friends and I visited the Jilabun River in the Golan Heights. We were so sad to see all the litter left on the river banks — crisp bags, plastic bottles, etc. Then I came up with something. Let’s imagine that for every person leaving one trash item behind, another person picks up two. Picking up just two pieces of trash should totally clean the place," Ben Adoram told Al-Monitor.

Adoram took his idea one step further, starting the Facebook group Cleaning Nature. On his page, he proposes to all nature lovers to go out to one of their favorite spots, equipped with a bag and rubber gloves, and pick up two pieces of trash and throw them in a garbage bin. "The idea is to generate a grassroots change — silent but profound — by the many people who love nature and who care about a nature free of litter. Some people are trashing — we will be the cleaners," Adoram said.

Another interesting initiative is that of the Israeli Travel association in cooperation with Sabres Israeli Field Center shop. Yaniv Levy of Sabres explains that the shop — opened in Jerusalem some 10 years ago — aims not only at selling fine travel equipment, but also at engaging with the community and working for the preservation of the environment.

The joint initiative calls on Israelis to clean up places they visited and film their actions. Transforming this chore into a ludic and fun project, participants are asked to film three short stories: the first video showing the place before the clean-up, the second one showing what the place looks like after the clean-up and a third video showing the trash bags being thrown into community garbage bins. The three videos should then be posted on an Instagram page called Don't Be Jerks, which is jointly managed by Israeli Travel and Sabresr. Anyone accomplishing the three-video challenge receives a generous gift card for travel gear, offered by Sabres.

Joining these personal initiatives are also the Nature and Parks Authority and the Environmental Protection Ministry, each with its own field of responsibility and expertise.

Environmental Protection Ministry spokeswoman Lihi Shtoyer-Gilead told Al-Monitor that the ministry is deeply implicated in cleaning Israeli beaches. "Already in 2005, we launched the 'Clean Coast Program,' designed to minimize marine litter and clean up Israel’s beaches and seas according to international commitments. We operate on several levels with the main focus to generate a change of mind on the importance of beaches and the sea and the importance of setting an example and take action," she said. Shtoyer-Gilead explained that as part of this program, they have set up the 'Clean Coast Index,' measuring objectively the cleanliness of the Israeli Mediterranean and Red Sea coastline, including public beaches.

The Park and Nature Authority told Al-Monitor that they are indeed worried about large quantities of trash in many nature reserves. "Israel is a beautiful country, rich with nature and heritage sites. But it is drowning in garbage, and this cannot go on. We must react. On the other hand, many people are now looking for jobs. The coronavirus and economic crisis pushed them into unemployment. These are good, talented, very motivated people, pushed into unemployment by no fault of their own. So the Nature and Park Authority decided to connect the two by now employing 500 people to rid the country of garbage and invading specimens," Nature and Parks Authority CEO Shaul Goldstein told Al-Monitor.

Goldstein took the opportunity also to call on all Israelis to do their part. "These 500 people will surely do a fantastic job, but Israelis need to help them out. Don’t toss trash in nature, don’t use disposable plastic plates for picnics and don’t throw away plastic bags. Let’s make sure to leave behind a clean environment," Goldstein pleaded. He considers a clean environment a national mission in order to preserve Israel’s nature, rivers and beaches for generations to come, well beyond the coronavirus pandemic.