Ambassador David Friedman is the latest sitting US official to promote the president's policies ahead of the 2020 election. 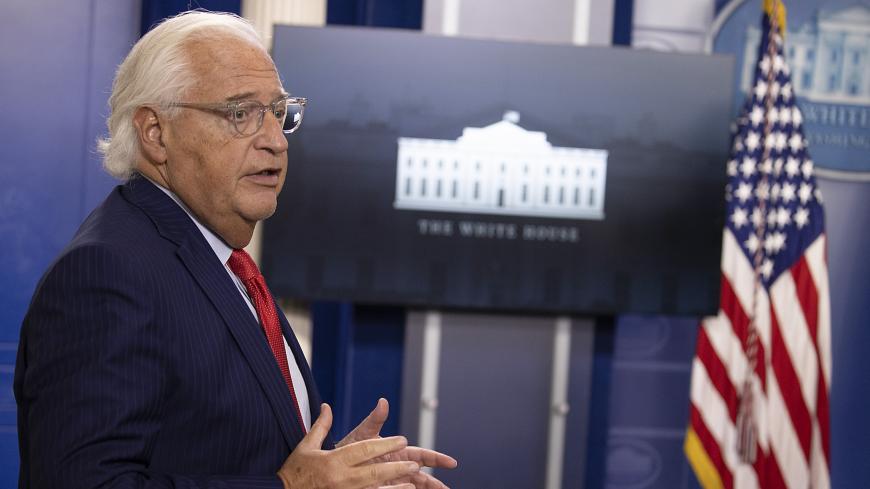 US Ambassador to Israel David Friedman speaks during a briefing at the White House Aug. 13, 2020, in Washington, DC. - Tasos Katopodis/Getty Images

US policy toward Iran could take a turn for the worse from the perspective of Israel's government and Washington’s Gulf allies if Joe Biden is elected president in November, US Ambassador to Israel David Friedman said on Sunday, in the latest example of a sitting Trump administration official vouching for the current president’s policies ahead of his reelection bid.

“Joe Biden was part of the Obama administration, which negotiated and implemented the Iran deal, something that President [Donald] Trump — and I share his view — thinks was the worst international deal the United States has ever entered into,” Friedman said in an interview with the United Arab Emirates’ al-Ain news site.

Friedman went on, “If we continue on this path, we think Iran will ultimately have no choice but to end its malign activity. … I’d hate to think that a new administration would undermine that, but regrettably, if Biden wins, I think they might.”

Why it matters:  Friedman — who previously advised the 2016 Trump campaign and legally represented Trump in his bankruptcy battles over his Atlantic City casinos — is the latest administration official treading on longstanding norms by promoting the president’s policies ahead of the November election.

During a visit to Israel last month, Pompeo addressed the Republican National Convention back in the United States moves that raised concerns about potential violations of the 1939 Hatch Act, which bars officials in the executive branch from engaging in certain political activities.

What’s next:  The Biden campaign has said it could renegotiate the 2015 deal with Iran, with additional provisions to inhibit Tehran's ballistic missile program. The position has raised concerns in Israel that a Biden administration may not be tough enough on Iran’s ambitions in the region.

Biden has called the Trump administration’s Iran policy a failure, pointing out its inability to rally even the United States' closest allies to reimpose the UN arms embargo on Iran, despite evidence of Tehran’s exportation of ballistic missile and drone technology to conflict zones in the region.

Earlier this year, Iran successfully launched a satellite into space. US officials say Iran’s space program could be a front for long-range ballistic missile research.

Last month, an anonymous senior US official said Iran could obtain enough fissile material to build a nuclear weapon by the end of the year and that Iran’s government was working with North Korea on long-range weapons.

Know more:  Ben Caspit lays out Israeli officials’ concerns and hopes ahead of the election as speculation grows that Iran may be waiting out the election to reapproach the negotiation table.