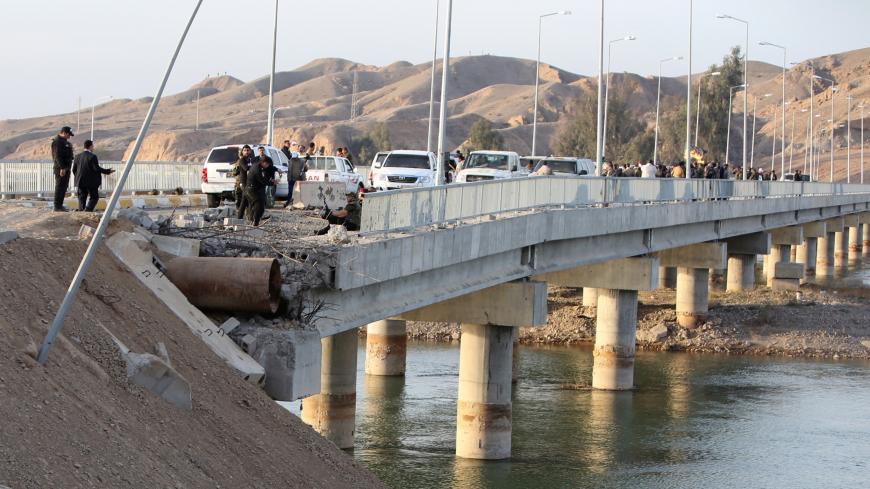 Iraqi government forces gather on Feb. 2, 2015, at the damaged al-Sodor Bridge, over the Tigris River, near Mansuriya in Iraq's Diyala province, after government forces retook the area from Islamic State control. Work on the Mansuriya gas field ended as a result of the Islamic State incursion, and now Iraq is seeking to put the contract out for bid again. - AHMAD AL-RUBAYE/AFP via Getty Images

The contract’s repeal and renewed efforts to entice fresh bidders adds more pressure on the state after Jabbar said today that oil projects in the country are being delayed. The delays are caused by cuts demanded by the Organization of the Petroleum Exporting Countries and its allies led by Russia (OPEC+) in an attempt to inject stability to global oil prices.

Iraq signed more than a dozen oil and gas field development contracts when it broadly opened the energy sector to development in 2010. The Turkish Petroleum-led consortium also included Kuwait Energy, an independent oil and gas exploration company focused on the Middle East and North Africa, and Korean Gas, a public natural gas company established by the South Korean government.

The group won a bid in 2011 to develop the Mansuriya field. At the time, the consortium accepted the Iraqi Oil Ministry’s offer price of $7 per barrel of oil equivalent. Located in Diyala province northeast of Baghdad, Mansuriya is near the country’s border with Iran and was the final field in Iraq’s energy auction that year.

Commercial production was set to begin in 2015. But work was halted by the June 2014 invasion of the Islamic State (IS). Insurgents never fully overtook the field, although they temporarily took control of at least two wells; The militants did hold territory nearby from which they conducted attacks.

The consortium declared force majeure — unforeseeable circumstances that prevented them from fulfilling a contract — but by mid-2017 were negotiating terms for the contract as IS was pushed from the area.

Even after repeated government requests to resume development work and reassurances that security had indeed returned, the Turkish Petroleum-led group resisted resuming development efforts. And despite a 20-year technical service contract, the group failed to produce any gas from the field.

So in 2018, Iraq ordered state-run Midland Oil Co. to develop the field, which is estimated to hold 4.5 trillion cubic feet of natural gas.

“We need to start gas production from Mansuriya to feed the power stations and cope with electricity shortages,” an Oil Ministry official told Reuters in 2018.

Recently, oil projects in the state have slowed due to the country’s economic woes that have fueled Baghdad’s shortage of cash, Jabbar said at an Iraq Petroleum conference today. That situation is exacerbated by the country's agreement with OPEC+, where Iraq agreed to curb its oil output until the end of the year. However, because OPEC+ found that Iraq overproduced from May to September, the intergovernmental organization requested that the state make additional cuts. Jabbar said there is also added economic strain as the Kurdistan Region of Iraq has not been contributing to agreed-upon limits.

Iraq has invited international energy companies to compete to develop the country’s many energy fields. The Oil Ministry is tasked with finding reliable partners while also reassuring them that oil and gas fields will remain safe from attacks by IS and other militant groups hiding in nearby mountainous areas. Meetings with international companies have been ongoing. Last week, Jabbar met with Patrick Pouyanne, the chief executive of Total SE, a French multinational integrated oil and gas company. The pair discussed solutions to developing the Akkas and Mansuriya fields.