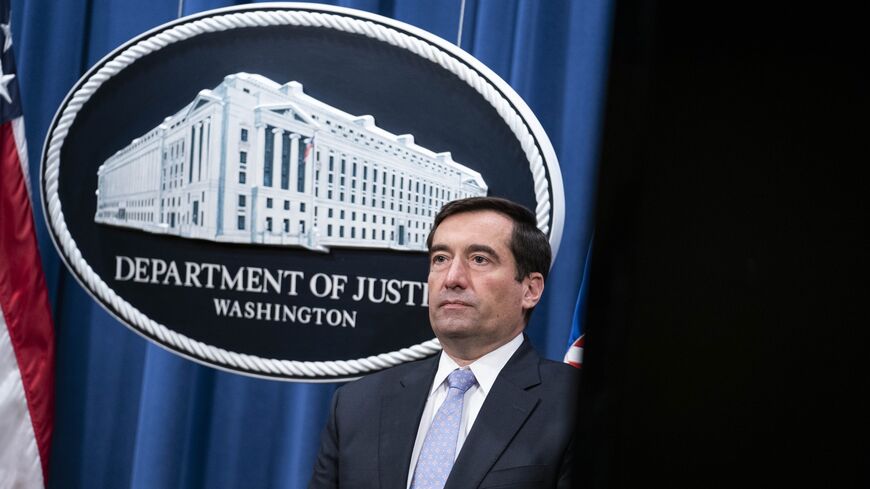 Assistant Attorney General for National Security John C. Demers participates in a virtual news conference at the Department of Justice on Oct. 28, 2020, in Washington. The next day, he announced that the United States had sold refined oil produced in Iran seized in August from tankers that appeared to be headed to Venezuela. - Sarah Silbiger/Getty Images

Iran accused the United States of "piracy" a day after the US Department of Justice announced the sale of Iranian-produced fuel seized from Venezuela-bound tankers.

On Thursday, officials from the Justice Department said the US government had sold and delivered 1.1 million barrels of refined petroleum seized in August from four petroleum tankers heading from Iran to Venezuela, both of which are under US sanctions. The estimated $40 million from the fuel sales is to be used to support a fund for victims of state-sponsored terrorism.

“The Pirates of the Caribbean openly boasting abt(about) their booty... No one civilized brags abt stealing,” Iranian Foreign Ministry spokesman Saeed Khatibzadeh said Friday on Twitter.

Iran denies the oil was Iranian, with Khatibzadeh tweeting “it wasn't ours.”

The Justice Department also announced Thursday it was seeking the forfeiture of Iranian missiles seized by the US Navy this year. According to the forfeiture complaint, the weapons were en route to Yemeni militants in violation of a United Nations arms embargo. According to the complaint, US and UN experts determined the weapons, which included surface-to-air-missiles and anti-tank missiles, were manufactured in Iran and consistent with the country’s known weapon systems.

Tehran denies giving financial or military support to the Houthis, a rebel group that is fighting the Saudi-led military coalition in Yemen. In July, Iran dismissed allegations that a vessel seized by the US Navy off Yemen’s coast had Iranian arms on board.

In addition to unsealing the forfeiture complaint, the Trump administration announced sanctions on 11 entities and individuals based in Iran, China and Singapore on Thursday for selling and purchasing Iranian petrochemicals.