Officials in Iran are scrambling to address the third wave of the COVID-19 pandemic. 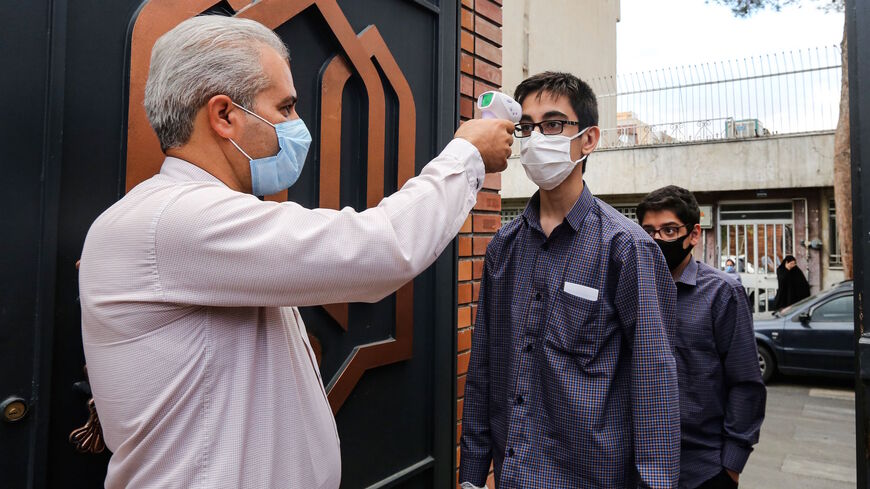 Mask-clad school children have their body temperatures measured as part of new COVID-19 pandemic school precautions, as they enter Nojavanan school in Iran's capital, Tehran, on the first day of schools reopening on Sept. 5, 2020. - ATTA KENARE/AFP via Getty Images

Infections have hit a daily high as Iran undergoes a third wave of the coronavirus.

One of the hardest-hit provinces is Tehran, which had to go on a province-wide shutdown. According to officials from the Tehran Headquarters to Combat Coronavirus, they have been considering shutting down traffic out of Tehran. One of the many problems with the shutdowns is that residents from Tehran have used the occasion to travel north, which is a popular vacation location. Numerous officials in Tehran have made public statements urging Tehran residents not to travel north. Given the high rate of infections in Tehran, traveling to other provinces only causes the virus to spread across multiple provinces.

An official with the Tehran Headquarters also said that every hospital in Tehran is dealing directly or indirectly with the coronavirus. He said they have even set up specialized COVID hospitals to deal with patients who have been infected.

The Tehran shutdown was announced Oct. 3 and is supposed to last until Oct. 9. The closure shuts down all schools, including public schools, trade schools and religious schools. Officials from the Ministry of Education reaffirmed that the shutting down of schools means that schools will move online and only in-person learning has been canceled. Officials have stressed that they are committed to quality education despite the restrictions.

According to the Headquarters head Alireza Zali, a one-week shutdown will not be sufficient. He said that currently only about half of Tehran’s residents are using masks, and in some high traffic areas, social distancing is not happening. Zali said for a shutdown to be effective against the coronavirus, a two-week shutdown would be necessary. He also encouraged distance working to slow down high traffic areas. Zali said the Interior Ministry and the Health Ministry are working together to decide how fines for those who do not follow health protocols will be administered.

Speaker of Iran’s parliament Mohammad Bagher Ghalibaf said the heads of the three branches are scheduled to meet to discuss how best to address the ongoing crisis of dealing with the third wave. Ghalibaf has been visiting hospitals and making other public visits in order to raise his public profile. Some of the conversations he has had with people on the streets involved him asking where is President Hassan Rouhani and what is he doing to address the current crisis.