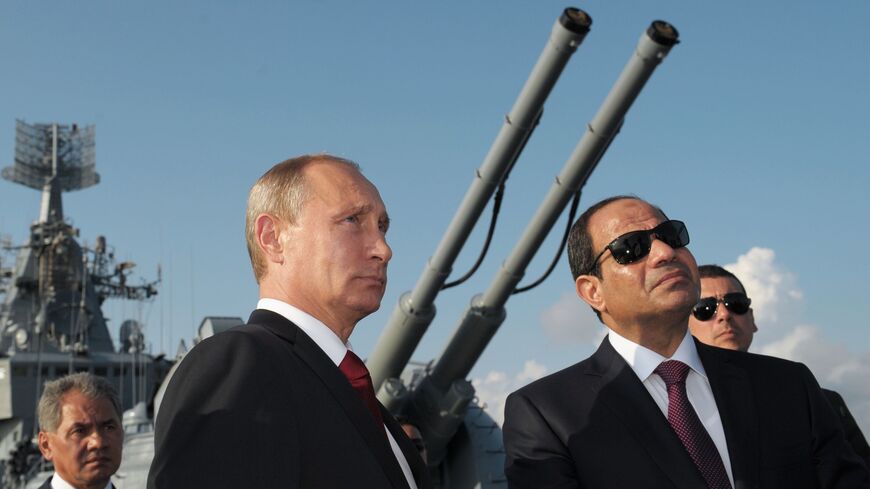 Russia and Egypt will conduct a joint naval exercise in the Black Sea for the first time, Russia’s Defense Ministry announced Thursday.

An Egyptian navy delegation discussed the planned exercise with Russian navy officials during a three-day visit this week during to Novorossiysk, which is on the Black Sea. The two navies will be accompanied by aircraft and will “work out joint tasks to protect sea routes from various threats,” according to a statement by the Russian Defense Ministry.

The exercise will be under joint command and include rocket and artillery fire from participating ships, the statement said. The drills will also include simulated inspections of "suspicious vessels."

The exercise, dubbed “Friendship Bridge 2020,” will be the first ever joint naval drill between the two countries in the Black Sea. Representatives of Egypt’s foreign and defense ministries did not return requests for comment.

Why it matters: Russia is seeking to position itself as a more favorable partner to Middle Eastern countries than the United States, and sees opportunity in Egypt.

President Abdel Fattah al-Sisi's 2013 coup in Cairo brought about a renewal of Egypt's military relations with Moscow. The two countries held their first joint naval exercise in 2015 on the Mediterranean.

Additionally, Russia’s forcible annexation of Crimea in 2014 helped to position Moscow as an even more powerful player in the Black Sea — a strategic frontier with NATO that offers access to natural gas reserves and greater influence over Russia’s eastern European neighbors.

It also extended Russia's radar and air defense ranges, and prompted increased US naval activity in the Black Sea.

The annual US-led multinational Sea Breeze exercise wrapped up on the Black Sea in July. That event brought together 27 ships and 19 aircraft from the United States, Ukraine, Romania, Turkey, Bulgaria, Georgia, Spain and Norway.

What’s next: Russia’s Defense Ministry has not yet announced a start date for the exercises. A spokesperson for the US Navy’s 6th Fleet was not immediately available for comment.

Know more: Russia has other concerns on its Caspian-Black Sea axis at the moment. Its relations with Armenia are being tested as Turkey has come firmly to the aid of Azerbaijan amid the war over Nagorno-Karabakh.

Ankara is seeking to cement its own place in the Caucasus, Fehim Tastekin writes, and its deployment of Syrian Islamist militants has caught Moscow’s attention.