A new UN report backs US claims that Russia sent more fighters to Libya as Turkey intervened against Hifter. 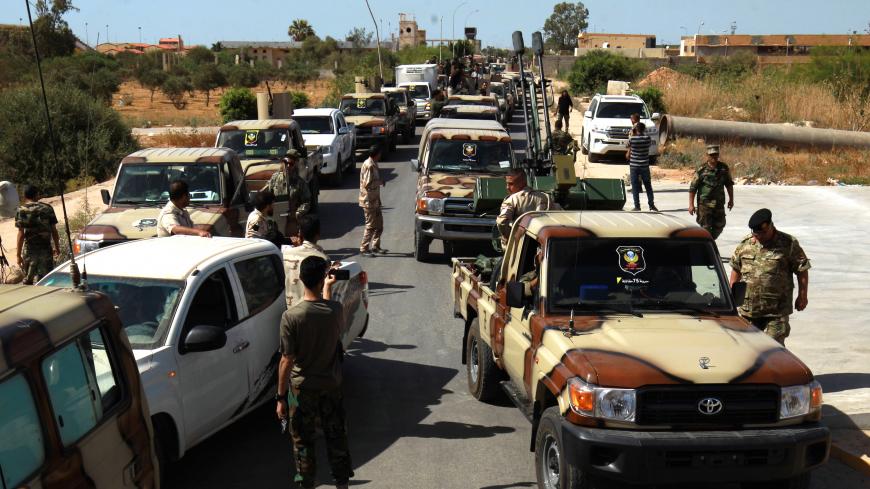 Members of the self-proclaimed eastern Libyan National Army (LNA) special forces gather in the city of Benghazi, on their way to reportedly back up fellow LNA fighters on the frontline west of the city of Sirte, facing forces loyal to the UN-recognized Government of National Accord (GNA), on June 18, 2020. - ABDULLAH DOMA/AFP via Getty Images

A new assessment by independent UN sanctions monitors adds credence to reports that Russia doubled down on its military support for Gen. Khalifa Hifter as his offensive against Libya’s Tripoli-based government faltered over the past year.

The report, seen by Reuters, said the Russian military’s logistical support for the Wagner paramilitary company’s activities in Libya “significantly increased from January 2020 to June 2020.”

Some 338 Russian cargo flights arrived in Libya from Syria between November 2019 and the end of July, according to the document, which has not yet been made available to the public.

A separate report submitted to the UN sanctions committee in May estimated Wagner had between 800 and 1,200 fighters in Libya. Late last month, a US inspector general report cited the US Africa Command as saying some 3,000 fighters had cycled in and out of Libya between April and June of this year.

US Air Force Col. Christopher Karns, a spokesman for AFRICOM, told Al-Monitor today that the command estimates some 2,000 Wagner forces are present in Libya.

Though the Kremlin denies any Russian personnel in Libya are there on behalf of the military, the May report said most of Wagner’s fighters were Russian. Belarusian, Ukrainian, Moldovan and Serbian fighters also have served with the group.

Since then, at least one of the Pentagon’s concerns has come true. In June, a convoy of Wagner mercenaries rolled into the Sharara oilfield, ostensibly to prevent Libya’s National Oil Company from restoring the flow, despite international calls to restore Libya’s domestic production.

Imagery has also circulated online purporting to show a Russian S-300 air defense system in Libya, the deployment of which Townsend previously said could pose a problem for NATO’s aerial access to the country, which is on the bloc’s southern flank.

The US military released its own aerial imagery in May that AFRICOM said showed Russian MiG-29 and Su-24 combat aircraft that had been delivered to Libya via Syria. The command also released photographs purporting to show Russian mine-resistant vehicles and a mobile radar system at al-Jufra air base.

The Tripoli government’s rollback of Hifter’s offensive this spring and summer led to a surge in civilian deaths, the UN reported. Wagner fighters have been accused of leaving behind explosive booby traps at residential homes.

UN Secretary-General Antonio Guterres called in June for an investigation after the discovery of at least eight mass graves near Tarhouna, southeast of Tripoli — an area that had until recently been occupied by Hifter’s forces.

Stephanie Williams, the UN’s acting envoy for Libya, called Wednesday for a demilitarized solution to Libya’s stalled conflict, beginning with the contested coastal city of Sirte. US officials have pushed just such a proposal in diplomatic discussions in recent months.

Sirte is still held by Hifter’s forces. A call last month by the Tripoli-based government for a cease-fire was reciprocated by the rival Tobruk-based parliament, but Hifter’s forces so far have not publicly expressed willingness to abide by one.

On Wednesday, a military spokesman for the Tripoli-based Government of National Accord accused Hifter's forces of violating the cease-fire for the second time in three days.