Foreign Minister Fuad Hussein warned an American withdrawal could cause other members of the anti-IS coalition to pull their diplomatic staff. 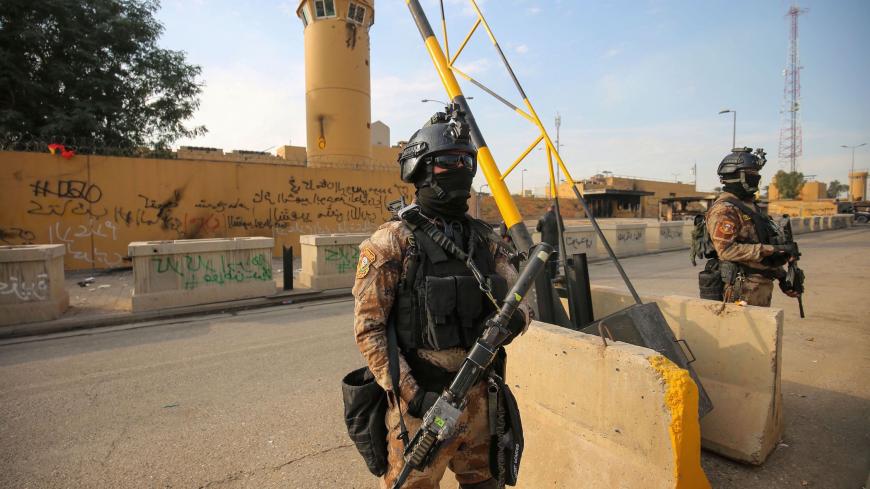 Iraqi counter-terrorism forces stand guard in front of the US Embassy in the capital Baghdad on Jan. 2, 2020. - AHMAD AL-RUBAYE/AFP via Getty Images

The US threat to withdraw diplomats from Iraq could set a “dangerous” precedent, the country’s foreign minister said Wednesday, warning that other members of the coalition assembled to fight the Islamic State may be tempted to do the same.

The Donald Trump administration has said it will shutter the US Embassy in Baghdad if the Iraqi government doesn’t do more to rein in the Iran-backed militias attacking diplomatic compounds and bases hosting foreign troops. Secretary of State Mike Pompeo informed President Barham Salih during a phone call last week that a “strong and violent” response would follow against the militias if the attacks continue, the Associated Press reports.

Between last October and July 2020, some 40 rocket attacks have targeted the US Embassy or bases housing American troops. Earlier this month, a roadside bomb struck a British diplomatic convoy moving between the airport and the heavily fortified Green Zone.

"We hope that the United States will rethink its decision," said Foreign Minister Fuad Hussein, according to AFP. "A US withdrawal could lead to further pullouts" from the coalition, which would be "dangerous, because the Islamic State group threatens not only Iraq but the whole region.”

The United States maintains some 5,000 troops in Iraq as part of the coalition, advising and providing training for local forces to defeat the last remnants of the Islamic State.

"Some people in Washington make parallels with Benghazi but it's a faulty analysis, just as this is a faulty decision," the minister said, referring to the Libyan city where four Americans, including Ambassador Chris Stevens, were killed when militants stormed the US Consulate in 2012.

On Monday, three children and two women were killed by a Katyusha rocket strike on a house near the Baghdad International Airport, the Iraqi military said. The US State Department, which has not confirmed the embassy reports, said it was “outraged” by the most recent attack.

“We have made the point before that the actions of lawless Iran-backed militias remains the single biggest deterrent to stability in Iraq,” spokesperson Morgan Ortagus said in a statement, noting the risk posed to “diplomatic officials and facilities.”

“Iraq is keen on enforcing the rule of law, the state's monopoly on having weapons, protecting foreign missions and diplomatic buildings," Kadhimi told a meeting of ambassadors and charges d'affaires, his office said.

In a statement after the meeting, the British ambassador to Iraq, Stephen Hickey, said he and other diplomats are concerned by the sophistication and increasing number of attacks, and support strengthening security forces in Baghdad’s International Zone.