Turkey and the UAE disagree on the Turkey-Kurdish conflict, Libya, drilling in the eastern Mediterranean and more. 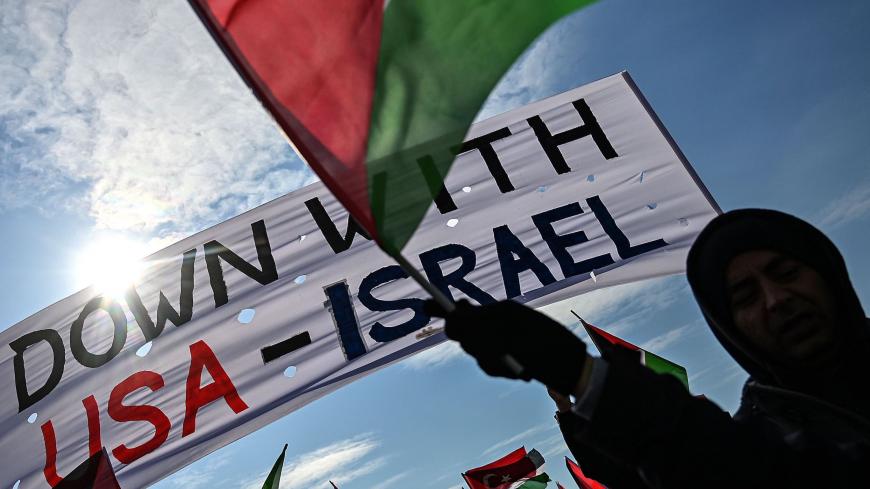 Demonstrators wave Turkish and Palestinian flags during a rally at Yenikap Square, in Istanbul, to protest the US Middle East peace plan, Feb. 9, 2020. - OZAN KOSE/AFP via Getty Images

On Thursday, the United States, UAE and Israel announced that the UAE and Israel would normalize relations in exchange for Israel halting its plans to annex parts of the Palestinian West Bank. Israeli Prime Minister Benjamin Netanyahu later said the cessation was only temporary. Netanyahu promised for months to begin incorporating Jewish settlements and the Jordan Valley into Israel on July 1, but his government has yet to do so. The UAE and Israel have grown closer in recent years, as has Israel and Saudi Arabia, but the UAE opposes annexation.

Turkish President Recep Tayyip Erdogan said he may sever ties with the UAE in opposition to its normalization with Israel.

“We may either suspend diplomatic ties or recall our ambassador because we stand with the Palestinian people. We have not let Palestine be defeated,” said Erdogan on Friday, according to the pro-government Daily Sabah news outlet.

Turkey has full relations with Israel.

“The two ministers affirmed the positions of their countries in support of the security and sovereignty of Iraq, condemning the Turkish attacks, and the need to immediately stop any Turkish military operations on Iraqi lands,” read a press release from Iraq’s Ministry of Foreign Affairs.

Turkey and the UAE have had wars of words before. The UAE is an ally of Saudi Arabia, while Turkey is close to Qatar. Saudi and the UAE have been in a diplomatic conflict with Qatar since 2017. Turkey supports the UN-recognized Government of National Accord in Libya, while the UAE backs the eastern-based Libyan National Army.

In May, the UAE joined Egypt, France, Cyprus and Greece in condemning Turkey’s energy exploration in the eastern Mediterranean. Turkey called the countries an “alliance of evil” in response.

Iran, a staunch enemy of Israel, also criticized the Emirates’ decision to normalize ties. Oman, rumored to be next to establish ties with Israel, voiced support for Abu Dhabi’s move.