Turkey’s controversial “city hospitals” threaten to swallow up billions of dollars in public money by the time their 25-year contracts with the government end. 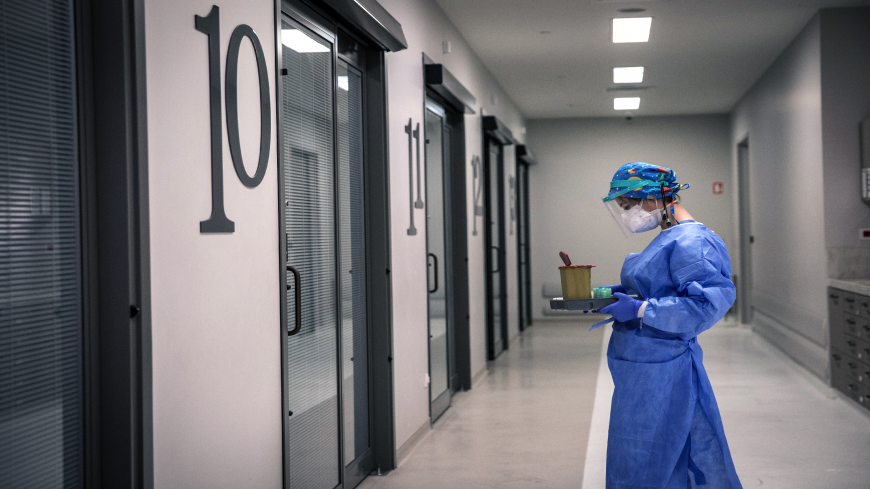 A nurse holding a COVID-19 test waits to enter an emergency room to perform the test on a patient in the dedicated COVID-19 emergency ward at a hospital on April 17, 2020, in Istanbul, Turkey. - Photo by Chris McGrath/Getty Images

Turkey’s so-called city hospitals — sprawling medical complexes that President Recep Tayyip Erdogan has touted as a “dream” project — have come to produce such colossal bills for taxpayers that not even prodigality could explain away the irrational “build-operate-lease” model on which they rest. While the urgency of the COVID-19 pandemic has overshadowed the unprecedented costs, monthly budget spending figures by the Health Ministry suggest that the city hospitals might swallow up tens of billions of dollars in public money by the time their 25-year contracts with the government end.

Amid Turkey’s growing economic woes, the companies operating the hospitals were paid 4.8 billion Turkish liras ($645.5 million) by the government for rent and services in the first seven months of the year, with the two categories representing roughly equal sums. Based on the cost of publicly owned hospitals, that money could have financed the construction of 10 hospitals with a capacity of 1,000 beds each. Moreover, the contracts have been denominated in euros, meaning that the cost of the payments the companies receive keep increasing amid the continued depreciation of the lira.

Facilitating access to health care was a major priority of the ruling Justice and Development Party (AKP) when it came to power 18 years ago. In its early years in power, the AKP enjoyed the budgetary means to step up spending on health care as the Turkish economy grew, boosted by a steady inflow of foreign capital. Though the burden of expansion was foisted on medical workers, mainly doctors, the electorate was happy with its easier access to health care, which became one of the main lynchpins of the AKP’s consecutive election wins. Yet the improvement was more quantitative than qualitative.

Encouraged by the popular content, the AKP turned to a public-private partnership model, which Britain had used, to launch the new city hospitals. Instead of using its own budget to build hospitals, the government encouraged companies to erect giant health care complexes, offering them generous incentives, including the allocation of land. Accordingly, the government would pay rent to the companies to use the buildings, in addition to euro-denominated service fees in areas such as physiotherapy, radiology and pathology. Other facilities in and around the complexes, including cafes, canteens, nurseries and hotels, as well as services such as car parking, cleaning and information management are similarly operated by the contractors.

The first city hospitals, inaugurated in the southern provinces of Adana, Isparta and Mersin in 2017, had capacities of roughly 1,000 beds each, but larger ones, with up to 3,000 beds, followed in bigger cities such as Istanbul and Ankara. The contractors were well-known AKP “favorites” such as the Ronesans, CCN, YDA, Turkerler and Astaldi companies.

Eleven city hospitals with a total of 16,000 beds have been inaugurated as of mid-2020, with two others scheduled to become operational by the end of the year and another five in 2021. The total capacity of the 18 hospitals is expected to hit 26,000 beds.

Given the nearly 5 billion liras paid in the January-July period, the payments to companies might well reach 10 billion liras ($1.3 billion) by the end of the year. And with the addition of the new city hospitals that have yet to be inaugurated, the estimated bill for a total of 26,000 beds is likely to hit 15 billion liras ($2 billion) per year.

Erdogan has described the city hospitals as a “dream” come true, pledging one for each big city across the country. The new hospitals may have helped Turkey handle the COVID-19 pandemic, but their mammoth cost has hardly received the public attention it deserves.

The most heated discussion took place in late 2019 during parliamentary debates on the government’s budget proposal. Opposition deputies gave examples of how a few years’ worth of rent paid to a city hospital equaled the funds required to build a government-owned hospital through the usual tendering method. In an apparent acknowledgment of the criticism, Health Minister Fahrettin Koca said three new city hospitals with a total of 6,100 beds would be built using budget funds instead of the public-private partnership model.

The Turkish Medical Association (TTB) and other professional groups in the health care sector welcomed the minister’s remarks but stressed that abandoning the public-private partnership model was not enough and that all city hospitals should be handed over to the Health Ministry.

Given the stringent contract terms, such a move appears to be a vague possibility. The TTB, meanwhile, has continued to criticize city hospitals as prodigal facilities built at inconvenient locations, often far away from city centers, and lacking a patient-centered service approach.

Editor's note: A previous version of this article incorrectly stated that city hospital operators received 4.8 billion Turkish liras in rent and services payments in July. The sum is actually the total of payments in the January-July period. The article has been updated accordingly.