Trump says US embassy move to Jerusalem 'for the evangelicals'

At a campaign rally the day the Democratic National Convention opened, Trump said that Christian voters are more supportive of US recognition of Jerusalem as Israel's capital than Jewish voters. 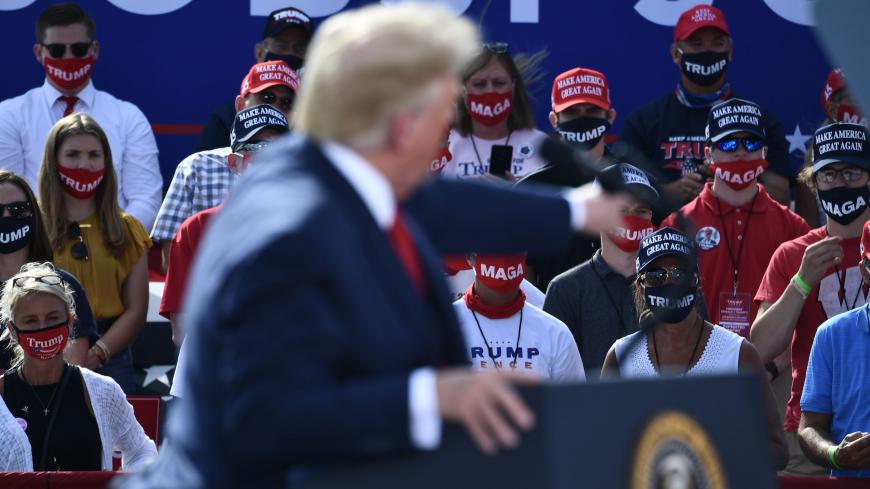 People wear facemasks as US President Donald Trump delivers remarks on the economy at an airport hangar on Aug. 17, 2020, in Oshkosh, Wisconsin. - BRENDAN SMIALOWSKI/AFP via Getty Images

US President Donald Trump said he moved the US Embassy to Jerusalem “for the evangelicals” .

Speaking at a campaign rally on Monday, the day the Democratic National Convention began, Trump said that Christian voters are more enthused about America’s embassy to Israel being in the holy city than Jews are.

Trump held a rally and gave a campaign speech in Wisconsin on Monday. Later that day, the Democratic National Convention kicked off in the same Midwestern state.

Trump added that presumptive Democratic nomnee Joe Biden, who served as vice president under former President Barack Obama when the United States signed the 2015 nuclear deal with Iran, will provide a more favorable agreement to Tehran if elected.

“Iran will insist on an even better deal than they made with Obama,” said Trump.

The United States withdrew from the landmark deal in 2018 and reimposed harsh sanctions on Iran. The administration says Iran is trying to build a nuclear weapon, which Iran denies.

Trump’s comments came as the United States continues its “maximum pressure” strategy against Iran. Part of the nuclear deal included the expiration this October of a weapons embargo on Iran. Last week, Washington failed to achieve an extension of the arms ban at the UN Security Council.

Trump also touted the US recognition of the Golan Heights as Israeli territory in the speech.

Last week, the United States brokered a deal for Israel and the United Arab Emirates to establish full diplomatic relations. The UAE is the first Gulf state to recognize Israel.

Jerusalem is a holy city to Jews, Christians and Muslims. Past Republican presidential candidates also vowed to move the US Embassy from Tel Aviv to the contested city. Trump’s decision gained support from Jewish voters as well as evangelical Christians. Some Jewish groups like J Street have grown more critical of US support for Israel in recent years, but evangelical support on the issue remains strong, hence Trump’s comments.