James Jeffrey said the explosion at a major gas pipeline on the outskirts of Damascus was "almost certainly a strike" by the Islamic State. 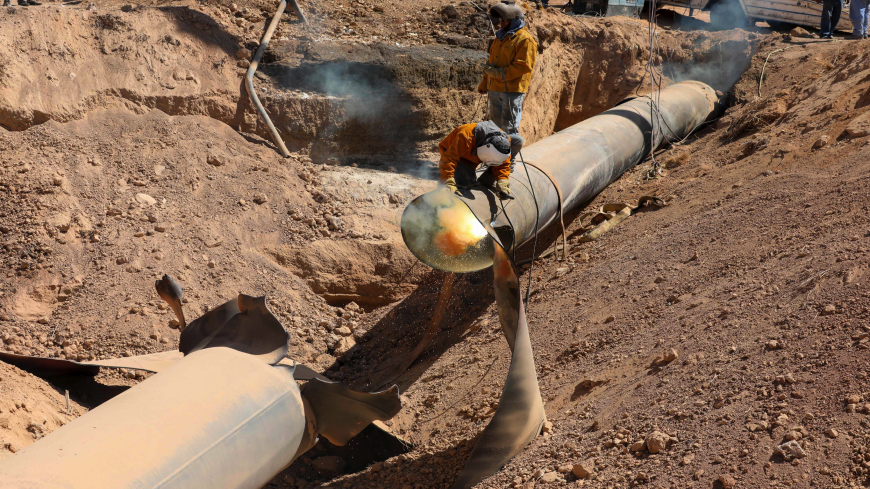 Syrian engineers repair a pipeline between the areas of Adra and Al Dumair in the Damascus region on Aug. 24, 2020, after it was reportedly the site of an attack. - Photo by LOUAI BESHARA/AFP via Getty Images

The apparent attack on a key gas pipeline that led to a massive power outage across Syria was likely the work of the Islamic State (IS), US Envoy for Syria James Jeffrey said Monday.

The explosion was “almost certainly a strike" by IS, Jeffrey told reporters in Geneva, adding that the United States was still looking into the cause. The senior State Department official is in the Swiss city representing the United States at United Nations-facilitated talks aimed at drafting a new constitution for Syria.

Jeffrey pointed to an uptick of militant activity in the eastern and southeastern regions near the Iraqi and Jordanian borders with Syria. Hundreds of American troops are based in the country to assist local partner forces, including the Kurdish-led Syrian Democratic Forces, with preventing an IS resurgence.

No one has claimed responsibility for the massive fire that engulfed the Arab Gas Pipeline early Monday, which according to local media, caused no casualties but did result in much of the country losing power.

Situated between the towns of Al Dumair and Adra, the 1,200-kilometer export pipeline carries Egyptian natural gas into Lebanon, Jordan and Syria. Kharboutli said the blast Sunday was the sixth time the pipeline had been targeted since the civil war erupted in 2011.

SANA also quoted Minister of Petroleum and Mineral Resources Ali Ghanem, who said the explosion was "a terrorist attack," a term Damascus uses to describe actions by the rebel groups seeking to oust the government.

Nearly a decade of fighting between the Russian-backed government and the opposition has taken a toll on Syria’s oil and gas infrastructure. In 2013, the government accused the opposition of firing on a gas pipeline near the international airport in Damascus, leaving the capital and large portions of southern Syria without electricity.

More recently, the government blamed “terrorists” for an underwater attack in January that targeted its offshore oil facilities in Tartus province. Alleged drone attacks in December hit an oil refinery in the central city of Homs, the government said.

Syria has limited access to fuel. International sanctions have choked off shipments to areas under government control, and most oil fields are now in the hands of the US-backed Kurdish forces, who seized them from the Islamic State in 2017.