The central bank is giving Lebanese banks until February to increase their capital by 20% or give their shares to the government amid fears that people's deposits are at risk. 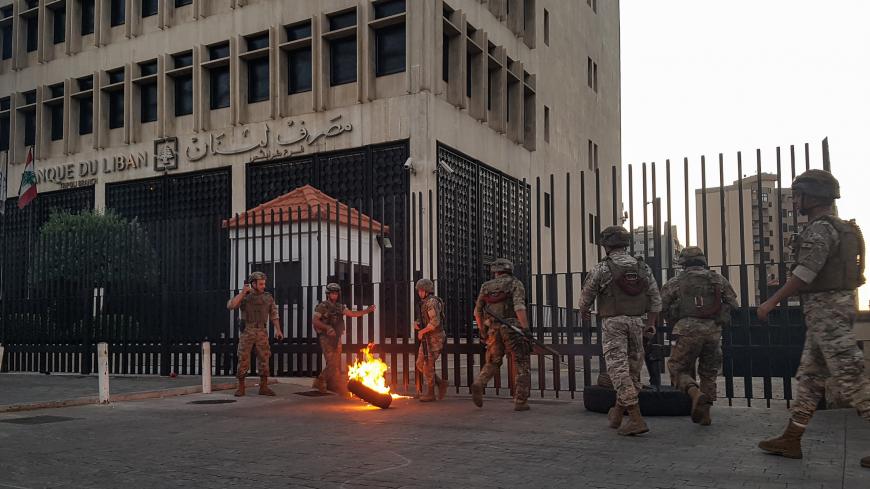 Lebanese army soldiers roll away a flaming tire from the fence surrounding the local branch of the Lebanon's central bank as protesters gather to demonstrate against dire economic conditions in the northern city of Tripoli on June 11, 2020. - FATHI AL-MASRI/AFP via Getty Images

Lebanon’s central bank is demanding other banks in the country increase their capital or face a takeover from the government. The order is an attempt by central bank authorities to up the amount of cash in the country’s banks amid fears that people’s savings are at risk.

The central bank's governor, Riad Salameh, said the banks have until February 2021 to raise their capital by 20%, Reuters reported Thursday. The bank issued a series of new regulations Thursday amid the ongoing crisis in the country.

Under the stipulation, the banks must bring in more capital from outside the bank. If not, the central bank will take their shares.

Lebanon is in the midst of a severe, monthslong financial crisis. Protests against poor economic conditions and corruption began in October. Since then, lockdowns to mitigate the spread of COVID-19 have further contributed to job and income losses. The Aug. 4 Beirut port explosion further exacerbated the situation.

The country’s currency, long valued at 1,500 pounds to the US dollar, has plummeted and there are now several competing exchange rates in the country. Banks have limited people’s ability to withdraw cash amid the crisis.

Lebanon now has the lowest credit rating in the world, indicating little ability to pay back debt.

In this economic climate, some Lebanese fear they will not be able to take out money from their banks and have been making withdrawals, which prompted the central bank's decision. The central bank’s commitment to assume control of banks who cannot obtain more capital is a pledge to people that their savings will be safe.

The Lebanese government is currently negotiating with the International Monetary Fund for assistance. The global financial body is demanding the country institute widespread economic reforms before any help is delivered. The Lebanese Cabinet resigned en masse this month following the Beirut explosion.