The Kurdistan Region of Iraq has been hard hit by both the coronavirus and the economic impact of the lockdowns, as a top politician announces he has contracted the virus. 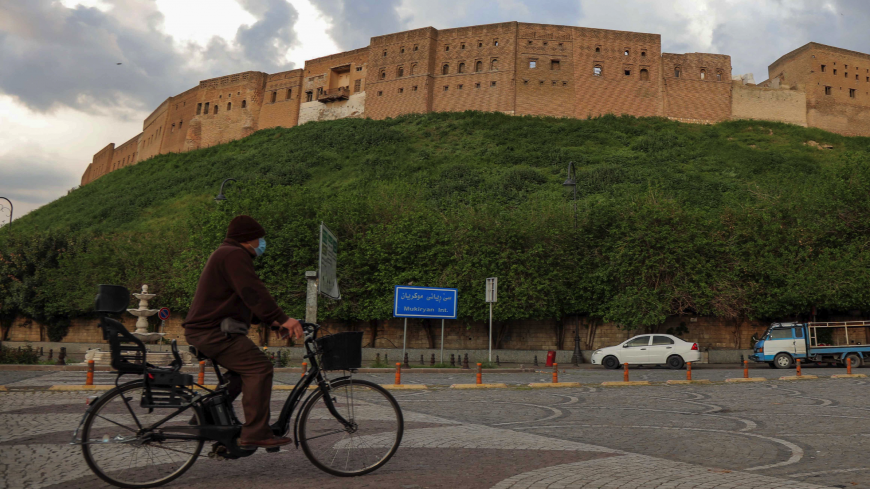 A man rides a bicycle in front of the Erbil Citadel in the capital of the northern Iraqi Kurdish autonomous region during the coronavirus pandemic, on April 12, 2020. - Photo by SAFIN HAMED/AFP via Getty Images

The Kurdistan Region of Iraq is experiencing all-time highs in COVID-19 cases, and a prominent politician announced he has contracted the coronavirus.

The number of cases has been rising steadily in the autonomous region since June. On Tuesday, the region registered a daily record of 653 coronavirus cases. On Wednesday, 566 cases were registered — the second-highest daily toll ever, according to Kurdistan Regional Government (KRG) statistics.

Sulaimaniyah province has fared the worst, with more than 9,500 cases to date. Erbil, the capital province, has had more than 7,300 cases. The less-populated Dahuk province has had only around 1,400 cases, according to the KRG.

The Patriotic Union of Kurdistan party dominates Sulaimaniyah. On Tuesday, its co-chair announced he has the coronavirus.

“I am in good health and recovering well,” Lahur Talabany said in a tweet. “I extend my appreciation and gratitude to all those working to combat the virus and urge everyone to continue to protect themselves.”

Several members of the KRG parliament have also contracted the virus, but Talabany is by far the most prominent politician to test positive in the statelet.

KRG authorities have alternated between instituting and rescinding lockdown measures since March. Last week, the Ministry of Interior ordered parks and cafes closed to mitigate the outbreak. The current spike could be due to people gathering for the Eid al-Adha Muslim holiday in late June, according to the Kurdish news outlet Rudaw.

The business closures have hurt an already reeling Kurdish economy. Many public servants’ salaries have been delayed for months. The federal government’s ban on most commercial flights trapped many foreign workers in the Kurdistan Region until regular flights resumed this month. Protesters gathered in Sulaimaniyah and smaller cities today to call for early elections in the KRG.

The situation in federal government territory in Iraq is similarly alarming. These areas are registering around 2,500 cases a day, according to the Iraqi Ministry of Health. Last month, some Iraqi doctors told Al-Monitor they are subject to abuse from families who blame the medical professionals for COVID-19 deaths.