Prime Minister Benjamin Netanyahu called French President Emmanuel Macron to praise him for his leadership after the Beirut blast and to campaign against Hezbollah in Lebanon. 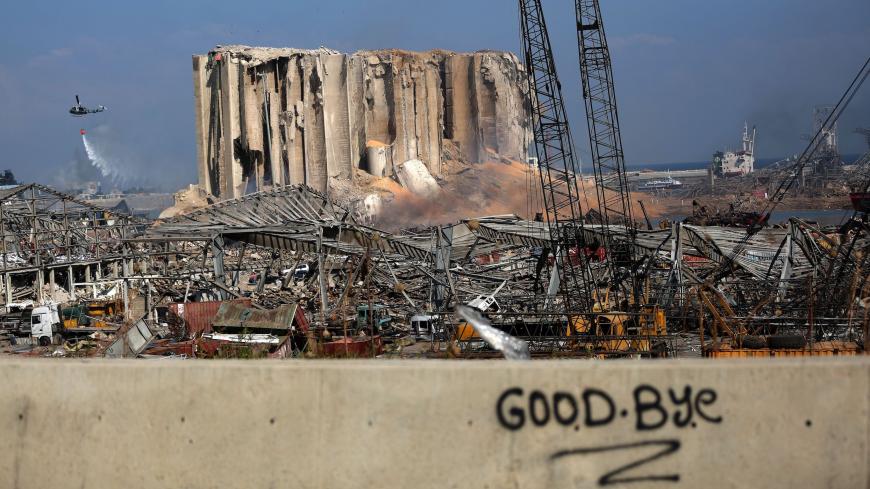 A Lebanese army helicopter flies over the Beirut port's destroyed silo on Aug. 5, 2020, in the aftermath of a massive explosion in the Lebanese capital. - PATRICK BAZ/AFP via Getty Images

Israeli Prime Minister Netanyahu spoke with French President Emmanuel Macron today, Aug. 11, on developments in Lebanon following the Aug. 4 blast in the port of Beirut. A statement issued by Netanyahu’s office read, “The prime minister praised President Macron for his display of leadership on the matter of Lebanon and expressed Israel’s willingness to give humanitarian aid."

Netanyahu made a point of also discussing Hezbollah with his French counterpart, calling for the group’s missiles and explosive materials to be removed from populated areas to prevent an event similar to the port explosion. “The prime minister clarified that if Hezbollah thinks they can solve the crisis in Lebanon by creating a crisis with Israel, this is a big mistake,” read the statement.

Macron's Aug. 6 visit to Lebanon and the demonstrations against Hezbollah and against the Lebanese government evidently offered Israel an opportunity to drum up international support against the group. Walking through a predominantly Christian district of Beirut, Macron was greeted by people shouting, “Mr. Macron, free us from Hezbollah.”

After the explosion, Israel was quick to offer Lebanon aid. Defense Minister Benny Gantz and Foreign Minister Gabi Ashkenazi said in a joint statement, “Israel approached Lebanon through international defense and diplomatic channels to offer the Lebanese government medical humanitarian aid." Netanyahu followed with a similar statement. His office announced that Israel had contacted the United Nations to explore possibilities for transferring humanitarian aid. The Tel Aviv municipality lit up its city hall with the colors of the Lebanese flag in a first-ever gesture of solidarity.

Israel realized quickly after the blast that the tragedy was pushing Hezbollah into a corner. On Aug. 10, Gantz publicly put Israeli sentiments into words. “While [Hezbollah Secretary General Hassan] Nasrallah is our greatest enemy to the north, he is Lebanon’s biggest problem from within Lebanon. We see the tragedy that happened in Lebanon. … Just think about what would happen if that were repeated with Iranian weapons in Lebanese villages,” said Gantz, addressing the Knesset’s defense committee.

The United States and several European countries consider Hezbollah — or at least its military arm — a terror group. As such, Lebanon already has a hard time receiving financial aid from the International Monetary Fund and other international institutions. With the enormous damage caused by the blast in the port and the deep economic crisis already afflicting Lebanon, the country desperately needs the help of the international community. For Israel, it means an opportunity to fracture the ties between the new government that will be established in Lebanon and the Hezbollah group. Jerusalem estimates that a split will only come if the international community pressures the Lebanese leadership on the issue. The phone call to Macron was the first public step in that direction.