Not all Israelis were pleased with Tel Aviv's gesture of solidarity with Lebanon, with quite a few saying that lighting the city hall up like the Lebanese flag went too far. 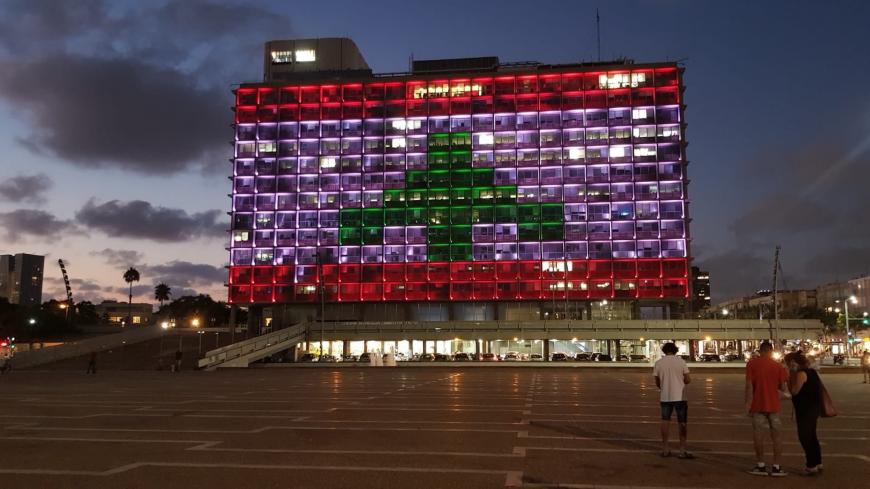 The Lebanese flag is illuminated on the city hall of Tel Aviv, Israel, Aug. 5, 2020. - Twitter: @TelAviv

In the evening hours of Aug. 5, the 12-story Tel Aviv city hall building was lit up like the Lebanese flag in solidarity with victims of the Beirut port explosion. Hundreds of residents and international news photographers arrived at Rabin Square, fronting the building, to document the historic moment when an official Israeli institution expressed solidarity with a declared enemy state even as military tensions spike along the border between the two neighbors. Tel Aviv Mayor Ron Huldai tweeted, “Humanity precedes any conflict. Our hearts are with the Lebanese people following the terrible disaster that befell them."

Tel Aviv is considered Israel’s most liberal city, but it was not alone. A spokesperson of the Israel Defense Forces (IDF) tweeted a photo of the display and wrote, incredibly, “The State of Israel stands together with the Lebanese people, its government and army. Our hearts are with you and we are with you.”

The Foreign Ministry's Arabic-language Twitter account also expressed support. “Humanity above all,” it read. “From the heart of Tel Aviv, Shalom to Beirut.” The prime minister’s Arabic-language spokesperson Ofir Gendelman hailed the gesture, tweeting, “For the very first time in Israel's history, Tel Aviv's city hall was lit tonight with the colors of the Lebanese flag as a sign of solidarity w/ the people of Lebanon and support for them following the horrific #beirutblasts.’’

In addition to the public displays, Israel also offered Lebanon humanitarian and medical aid, including hospital treatment for the injured. Although the COVID-19 epidemic has filled hospitals to capacity, the Ziv Hospital in the northern town of Safed, where casualties of the Syrian civil war have been treated, said in a statement, “We are experienced and we are ready.”

The much larger Rambam Medical Center in the port city of Haifa also spoke up. Its spokesperson noted that following events in Beirut, in coordination with official agencies, Rambam would prepare medically and logistically to take in casualties of the event if needed, putting to use its extensive trauma treatment experience. Head of the Arab media division of the IDF Spokesperson's Unit Avichai Adraee tweeted the Israeli aid offer in Arabic, adding, “Israel has extensive experience in these fields and it has sent delegations to provide humanitarian assistance around the world. This is the time to put aside all divisions.”

Prime Minister Benjamin Netanyahu also offered help. “First of all, in the name of the Israeli government, I am conveying our condolences to the Lebanese people,” he said, addressing the Knesset. “Yesterday there was a very great catastrophe in Lebanon. We are ready to send humanitarian assistance to Lebanon, as human beings to human beings.”

Lebanon, however, did not receive Israel’s displays of sympathy with enthusiasm. Many Lebanese and other Arab social media users reacted with curses and expressions of scorn, accusing Israel of hypocrisy and noting that Israel had bombed Beirut heavily during the 2006 Second Lebanon War that broke out after Hezbollah kidnapped two Israeli soldiers.

“It was expected that Lebanon would reject Israel’s outreach,” said Ron Schleifer, a professor of media and psychological warfare at Ariel University. “The anti-Israel incitement in the Arab media is so significant that even a beautiful humanitarian gesture such as Israel’s is met with a cold shoulder. As far as most Lebanese are concerned, we Israelis are repulsive. … They cannot accept that fact that Israel is the most prosperous state in the region, in total disproportion to all its neighbors. Accepting help would be conceding this unpleasant fact.” According to Schleifer, the only way to transfer aid is covertly, through international bodies. Israel’s public offers of help did not stand a chance, he added.

While many on the political right also supported humanitarian aid to Lebanon, the projection of its flag in the center of Tel Aviv and Israel’s official statements of solidarity with an enemy state riled many. Israel Beitenu chair Avigdor Liberman responded, “When the mayor of Tel Aviv decides to light up the city hall in the colors of the Lebanese flag as a sign of solidarity, it is a step of treason.” Minister for Jerusalem and Heritage Affairs Rabbi Rafi Peretz tweeted that Israel can and should offer humanitarian help to civilians injured in Lebanon, “but raising the flag of an enemy state in the heart of Tel Aviv is moral confusion.” Knesset member Ayelet Shaked of right-wing Yamina expressed similar criticism, while the prime minister’s son Yair Netanyahu tweeted, “The law bans flying an enemy flag.” Knesset member Ofir Sofer of the right-wing Ichud Leumi (National Union) party wrote, “The Book of Proverbs says, 'Do not rejoice at the downfall of enemies,’ but that does not mean you have to fly their flag.”

In an online poll by Maariv, slightly more respondents supported the move, but the anti-Israel responses in Lebanon appear to have disappointed many in Israel. “Many Israelis are convinced that if they only reach out a hand to the Lebanese people and express sincere empathy, the hatred will disappear,” said Schleifer. “But that is far from being the case. Israel’s offers were sincere. I am sure Ron Huldai really was well intentioned, but it will never work as long as the Arab world refuses to accept Israelis’ presence in the region as legitimate. Only once that happens will good neighborly relations be created.”