Conservative activists are protesting the popular comedy show "The Jews are Coming," though supporters say its irreverence is crucial to Israeli society. 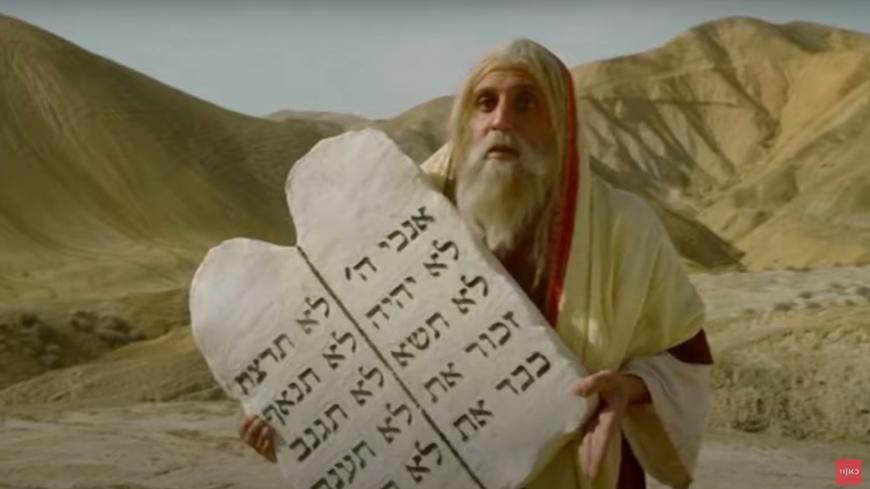 A still from Israeli public broadcaster Kan shows an episode of "The Jews are Coming." - IPBC

"The Jews are Coming" is a Monty Python-esque sketch comedy show about the history of the Jewish people. Produced by Israel's public broadcaster, Kan, the irreverent program skewers characters and events in Jewish history, from Abraham to Hitler and the burning bush to the West Bank.

Responses to the show, which is filled with Israeli chutzpah and very little subtlety, have been equally outspoken. Religious leaders and politicians have protested, calling for its creator and the Kan broadcasting company to be investigated for violating Articles 170 and 173 of the penal code, which prohibits public offense to faith or religious sentiments.

The storm has reached such heights that Kan has filed a police complaint over death threats against those involved in the program. Kan spokesperson Ilanit Zvilli told Al-Monitor, "'The Jews are Coming’ is a successful, quality satirical program. Freedom of expression and freedom of creation are supreme values in public broadcasting, as is self-directed humor. We will continue in our public mission without fear."

More than 1,000 people demonstrated in Jerusalem on Aug. 17 against the show. One of them was Rabbi Elyakim Levanon, head of the Elon Moreh Yeshiva. "Is there no limit to the disdain and humiliation of the Torah?" he thundered. "We live in a Jewish state and in a Jewish state we must honor [our forefathers], our tradition, our beliefs."

Rabbi Zamir Cohen, founder of Hidabroot ("Dialogue" in Hebrew), also addressed the rally, calling on the actors in the show to "repent for their sins," saying, "Once they recognize the truth of Hashem and the Torah of Israel, they will hopefully speak before us at our next rally.”

In an interview with Al-Monitor, right-wing lobbyist Shai Glick said, "The show is a humiliating, duplicitous mockery. They speak of their rights to free speech. But what about our rights to not be offended and humiliated by a publicly funded authority? The public broadcaster has a responsibility toward the sensibilities of the religious public in the Jewish state."

Because of the shaky status of the current government, the ultra-Orthodox and Orthodox wield political power that is disproportionate to their share of the Israeli population. Yamina Knesset member Bezalel Smortrich told Al-Monitor that he intends to submit a proposal to privatize the Public Broadcasting Cooperation, which would force it, he says, to cater to the preferences of its viewers rather than to count on public funding. “There is no place for such a series anywhere in the world, certainly not in the Jewish state. … 'The Jews are Coming,' which insolently despises the sanctuaries of Israel and … the feelings of the vast majority of Israeli citizens, Jews and non-Jews, is funded by the money of us all."

Following intense pressure from Glick, nearly a dozen Likud central committee members (most of whom are not religiously observant) joined with members of ultra-Orthodox Shas to demand that the Education Ministry remove links to clips of "The Jews are Coming" that had been posted on the ministry's website as optional materials for Bible teachers in Israeli schools.

The ministry removed the links and then restored them, and refuses to provide any information regarding its decisions despite repeated requests. Asked about it by Al-Monitor, a ministry spokesperson wrote, "Four clips from 'The Jews are Coming' … have been on the Education Ministry's website for some three years. These clips provide enrichment materials from which teachers may choose in order to fulfill the purposes of Bible studies."

Many Bible teachers were not satisfied with the content's swift restoration, and dozens wrote a letter to the ministry's head of Bible studies. "We … view this call [to remove the clips] as a violation of pedagogical and academic freedom in the education system. … Just as you cannot force someone to watch a program, you cannot ban the use of such content.” The teachers say they will continue to show the videos in their classes.

Efrat Mizrahi, a Bible teacher in a secular high school in the Tel Aviv area, told Al-Monitor that she is "furious at the ministry," saying "It is accepting the ultra-Orthodox contention that they have ownership of the Bible and Jewish texts. But as secular Jews, this is our heritage, too, and we have the right and the responsibility to teach this to our students."

Mizrahi says she regularly uses clips from "The Jews are Coming" when teaching the Bible to high school students. "The videos are engaging and sometimes even a bit risqué, and that appeals to the students. But more importantly, the show is satire, so while it helps us to teach our students to love our heritage, it also encourages them to think critically about Jewish history and culture."

Satirist, screenwriter and standup comedian Gil Kopatch was one of the first to irreverently use traditional Jewish sources in his routines. He recalls that 20 years ago, when he first started performing, his life, too, was threatened and he had to be protected by bodyguards.

"'The Jews are Coming" is by far the best show on Israeli TV, and I say that as an observant, God-fearing Jew," Kopatch said. "Is the religious establishment so insecure that they view every gag as a threat to the very foundations of Judaism?" he asked in an interview with Al-Monitor. "Are the shelves full of Jewish books and tradition, that have existed for over 3,000 years about to come toppling down because of a punch line?"

He concluded, "The religious establishment claims that they are the only ones who can interpret the Jewish sources. But they don't hold the keys to God. This fight against 'The Jews are Coming,' isn't about Jewish faith, belief or sensibilities. It's about politics and control."