Yisrael Beitenu leader Avigdor Liberman is determined to bring about the toppling of Prime Minister Benjamin Netanyahu in any elections to come. 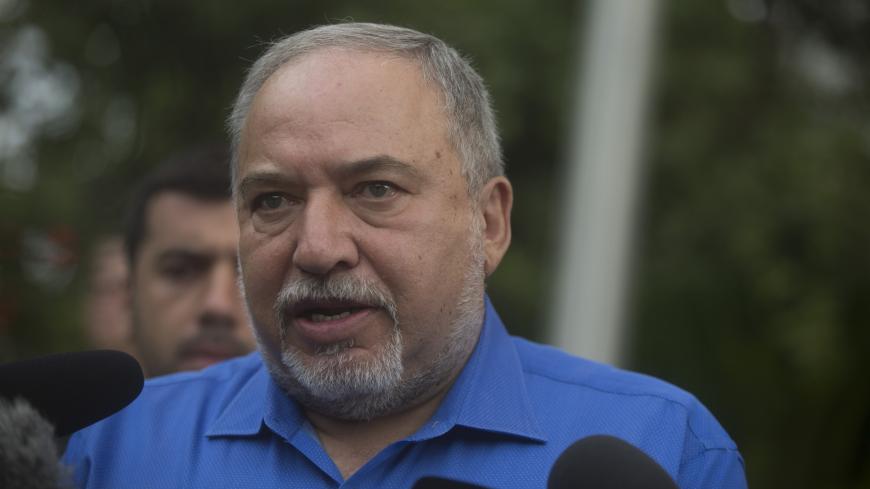 Yisrael Beitenu party leader Avigdor Liberman speaks to the press during a visit to a Jewish settlement on Sept. 8, 2019, in Maale Adumim ahead of Israel's Sept. 17 elections. - Lior Mizrahi/Getty Images

It all started Aug. 3, when Yisrael Beitenu leader Avigdor Liberman saw videos of Prime Minister Benjamin (“Bibi”) Netanyahu going to a street stand in Ramle to pick up a falafel. It was suddenly clear to Liberman that Netanyahu had decided to bring down the government and call a new election.

Liberman is probably the most senior “Bibiologist” in all of Israel. He is intimately familiar with the code of behaviors used by his former boss. He also knows that Netanyahu is a hypochondriac, so that if he takes to the street with the coronavirus raging all around him, and that if he is willing to expose himself to dozens of strangers, backed up by a cheerleading squad chanting, “Bibi, we love you!” the die is cast. Netanyahu is about to launch a new election campaign.

Only time will tell if Liberman is right. But he will not waste time waiting for that to happen. Instead, he has launched his own election campaign with one clear purpose in mind. He says as much openly, too: “I have appointed myself to the post of project manager for removing Netanyahu from power, no ifs, ands, or buts.” He seemed to enjoy saying it on a Aug. 5 morning interview with Army Radio. By using the title assigned to professor Ronni Gamzu, the coronavirus czar appointed by Netanyahu two weeks ago, Liberman was emphasizing just how much the prime minister really disgusts him.

When asked what he meant, Liberman responded sarcastically: “First of all, we need to thank Netanyahu for everything he did, and then send him home. That’s it. Enough! What I think we’ve seen is a prime minister who failed to win an election on three separate occasions. He is a resounding economic and health failure.’’

Unlike the preceding elections, in which there was some doubt as to whether Liberman would sit in a Netanyahu government, he is now saying loud and clear that he would not sit in such a government under any circumstances. What this effectively means is that Liberman has withdrawn from the right-wing bloc. If he was considered an integral part of the right-wing bloc in 2019 elections, and if he still flirted with the right in the second election that year, it was only after the third election, in March 2020, that he crossed the lines officially by recommending to the president that Blue and White party Chairman Benny Gantz be asked to form the next government.

Over the years, Liberman has fought frequently with the Knesset’s Arab members, going so far as to call them traitors. Still, he was willing to cooperate with them just to bring Netanyahu down. This just shows how much he loathes the man to whom he once showed unconditional loyalty. But Liberman’s move was unsuccessful. Gantz failed to provide the goods, and the Blue and White party splintered. Gantz ended up joining the Netanyahu coalition, once again destroying Liberman’s plan to remove Netanyahu.

If there is, in fact, one more round of elections, as Liberman predicts, his campaign will be more lethal and clearer than ever, at least as far as Netanyahu is concerned. Liberman will present himself as the only candidate with a proven track record of being serious about taking Netanyahu down. What he is depending on is the intense anti-Netanyahu sentiment among the public, believing that this will give him the boost he needs. In other words, Liberman is convinced that he will be able to steal more than a few votes from among the large segment of the electorate that has grown disappointed with the Blue and White party.

Another major issue of his campaign will be his struggle against the ultra-Orthodox. He will promise to do everything he can to send them to the opposition. Here too, Liberman is hoping to convert antagonism toward the ultra-Orthodox, which has intensified during the COVID-19 pandemic, into political strength. In a Knesset debate Aug. 4 dedicated to the coronavirus crisis, he claimed that 70% of coronavirus patients in Israel are ultra-Orthodox.

The polls all show that the chairman of Yisrael Beiteinu would be unable to break the eight-seat barrier, which is the most his party has ever won in an election. On the other hand, the seats he does have are stable. In other words, he has a loyal solid and base, which Netanyahu has been unable to crack.

For years, Liberman has been an enigmatic figure in Israeli politics. He surprised everyone by joining and leaving coalitions, without always providing any real explanation for his decisions. He gave up the most senior positions in government on more than one occasion, the last time being when he resigned as defense minister in a Netanyahu government in November 2018. At the time, everyone was convinced that Netanyahu’s government would collapse like a house of cards as a result of Liberman’s sudden move. Everyone was wrong.

In retrospect, it became clear that Liberman had already decided then that he would bring down the Netanyahu government, but he played his cards close to his chest. The only person who knew exactly what he was trying to achieve was Netanyahu himself. After all, he knows Liberman just as intimately as Liberman knows him. Netanyahu was not surprised when Liberman left him without a government at the very last moment, believing that it would bring down the coalition. But knowing Liberman as he does, Netanyahu came prepared with a preemptive strike. He dissolved the Knesset in the middle of the night and called a new election. Since then, the war between these two men has only escalated. Liberman now claims that Netanyahu has been going after his sons, and that the prime minister is behind the complaints filed against him with the police.

Liberman’s Knesset speech Aug. 4 was prepared well ahead of time. He began his address by saying: “The foundation of every free and democratic society is intense public debate over questions on the public agenda. Without such debate, there is no democracy. That is why violence and incitement to violence aren’t the only things to put a democratic regime at risk. No less dangerous to it is an atmosphere in which political rivals are silenced. That poses a genuine threat to any free society.”

Ostensibly, what Liberman really wanted was to provide some backing to the demonstrations against Netanyahu. Knesset members from the Likud heckled and shouted at him to interrupt his speech. Then there was Netanyahu, who was also present. The prime minister immediately recognized what was going on, so he looked Liberman squarely in the eye and adjusted his mask enough to expose a bitter, cynical smile.

Apart from Netanyahu, however, no one realized what was really going on. Liberman seemed to enjoy the shouting from the Likud benches, saying, “This speech was written by the best speechwriter in Israel, and it was delivered from this very podium. Word for word, this is a speech that Netanyahu gave on Dec. 25, 1995. I copied word for word everything that Netanyahu said right here in the Knesset.”

Liberman did, in fact, take part of a speech delivered by then opposition chair and Chairman of the Likud Benjamin Netanyahu. Netanyahu gave this speech two months after the assassination of Prime Minister Yitzhak Rabin, when the right was under serious attack. Liberman was Netanyahu’s right-hand man at the time. Liberman well remembers the atmosphere in the country, which saw right-wing demonstrations delegitimized. Now, the roles have been reversed. Netanyahu is prime minister, the demonstrations are against him and Liberman’s heart is with the demonstrators.