IRGC says Iran to ‘mobilize’ to help Lebanon after blast

Iranian officials and media have offered condolences after the explosion that rocked Beirut. 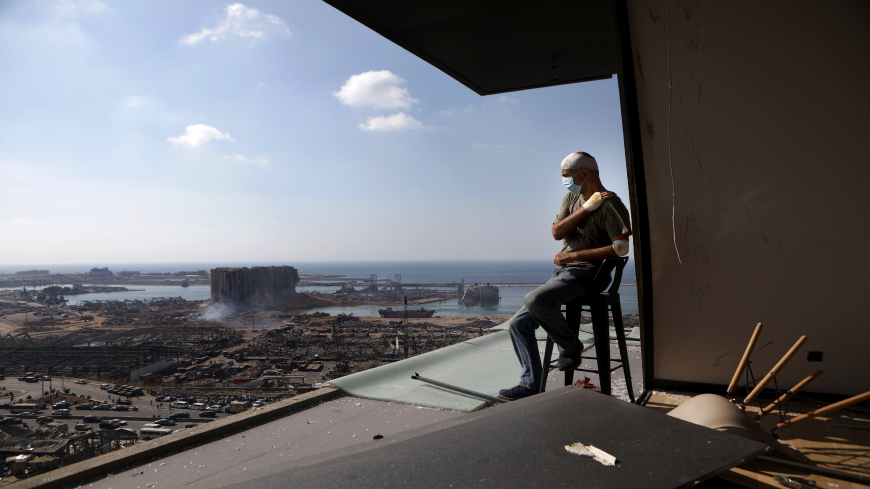 Lebanese TV producer Tony Ahwaji sits injured on the balcony of his damaged apartment in the damaged neighborhood of Mar Mikhael in the Lebanese capital Beirut on Aug. 6, 2020, two days after a massive explosion shook the Lebanese capital. - Photo by PATRICK BAZ/AFP via Getty Images

Tuesday's blast at Lebanon's Beirut port has been as much of a shock to Iran as anywhere else in the world. Iranian Foreign Minister Mohammad Javad Zarif tweeted condolences in Arabic and English and spoke with Lebanese Foreign Minister Charbel Wehbe. Iran’s Supreme Leader Ayatollah Ali Khamenei tweeted condolences as well. Iran flew in three airplanes of aid to the country immediately after the explosion.

Hossein Salami, commander of Iran’s Islamic Revolutionary Guard Corps, also vowed to help Iran. “The Lebanese people are the great stars of resistance in the Islamic world and have always faced events with patience and endurance,” Salami said. “All of our abilities will be mobilized to help the people of Lebanon.”

Salami’s reference to the “resistance” is to the group Hezbollah, which Iran has funded since its early stages. Iran’s close links to Lebanon and Hezbollah is certainly one reason why so many Iranian newspapers covered the blast on their front pages. The port was one of the main entryways for food and other goods into the country, and in addition to the billions in damages done to the country, it also displaced hundreds of thousands of citizens from the capital.

Mashregh News talked about some of the possible political scenarios that could unfold as a result of the blast. Comparing the blast to the assassination of former Prime Minister Rafik Hariri — for which Hezbollah members have been the prime suspects — the article said that the explosion could be used as an excuse to bring more foreign interference into the country that is even “more dangerous.” The article talked about the anti-corruption protests and the calls to form a new government, saying the explosion may open the door for the United States to “politically exploit” the situation in helping to shape the new government.

The article stated that given this port imported approximately 70% of Lebanon’s needs, the financial assistance that will be necessary will force concessions against Hezbollah. The article said the media — aligned with the United States, Saudi Arabia and Israel — will work hard to paint Hezbollah as being responsible for the explosion.

In other news, Iran recorded its lowest confirmed daily death toll from the coronavirus since July 10. According to Health Ministry Spokesperson Sima Sadat Lari, 174 people died in the last 24 hours. The lowest daily death toll had been 142 on July 10. The total death toll is now almost 18,000. The Health Ministry, however, has said previously that the actual number of deaths is certainly higher because certain individuals who had symptoms of the virus, were treated at hospitals and had died before testing positive were not accounted for in the official numbers according to World Health Organization protocols.

President Hassan Rouhani today reiterated that Iran will continue to go ahead with the Muharram religious holiday ceremonies later in August despite the health concerns of dealing with the pandemic. At the meeting of the National Headquarters for Combatting Coronavirus, Rouhani said that local headquarters for combatting the virus will issue safety and health guidelines for conducting the religious ceremonies, and it will be up to the custodians of the mosques and shrines to make sure those guidelines are followed.