The report by the United Nations' Syria commission details numerous possible war crimes in recent months by both pro-government forces and the rebel group HTS. 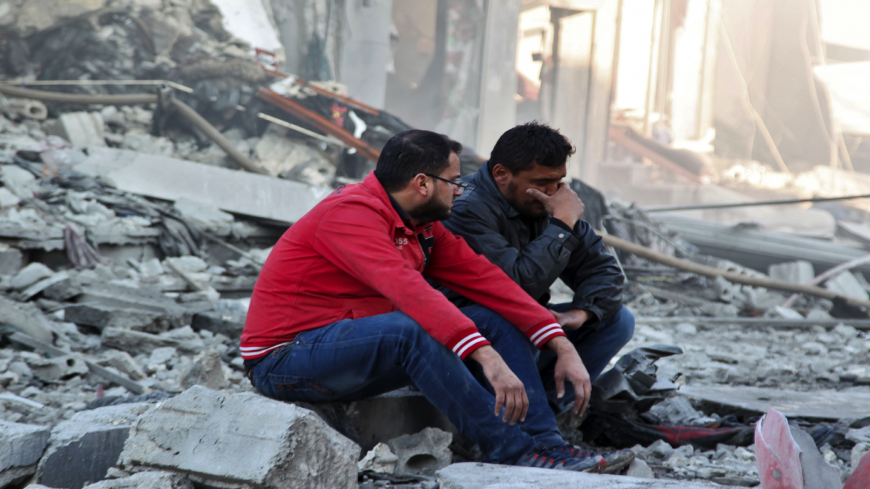 A man reacts as he sits next to another in the rubble outside a collapsed building following a reported airstrike in the village of Balyun in Syria's northwestern Idlib province on Dec. 7, 2019. - ABDULAZIZ KETAZ/AFP via Getty Images

The United Nations’ Independent International Commission of Inquiry on the Syrian Arab Republic released a report on “rampant human rights violations” in the Idlib province and surrounding areas on Tuesday, per a request from the UN Human Rights Council. The findings covered November 2019 to June 2020, and documented 52 attacks that killed civilians or damaged civilian infrastructure. Both pro-government and rebel forces were responsible for the attacks on hospitals, schools, markets and homes, the UN said in a press release.

“What is clear from the military campaign is that pro-government forces and UN-designated terrorists flagrantly violated the laws of war and the rights of Syrian civilians,” said commission chair Paulo Pinheiro in the release.

Northwest Idlib province is the last major rebel stronghold in Syria. The government of President Bashar al-Assad has regained control of most of the rest of the country. Turkey also controls parts of the north, while Kurdish-led forces control most of the northeast. Idlib is dominated by the al-Qaeda-linked Hayat Tahrir al-Sham (HTS), which the UN designates as a terrorist organization.

The report included a variety of figures within the stated timeframe. From November 2019 through April 2020, there were 676 civilian deaths tracked by the commission from attacks on schools, markets and medical facilities in Idlib and the western Aleppo area. Western Aleppo neighbors Idlib and is also controlled by rebel forces. The actual death toll is likely much higher, according to the report.

The killings by the government largely came from airstrikes. “We didn't choose to leave; there was no other alternative. The attacks were barbaric,” a man from the town of Maaret al-Numan said on the December government offensive to take the area, according to the report.

Government offensives led to a massive displacement of more than 500,000 people, the report found.

Rebel groups also attacked civilians. A total of 202 civilians in adjacent government areas were killed by rebel groups in western Aleppo from November 2019 through April of this year, according to the report.

The rebel attacks on civilians took several forms. “Armed groups utilized long-range artillery systems which could reach positions in parts of western Aleppo controlled by the government,” the commission said.

Groups including HTS used mortar attacks on civilian areas as well as improvised explosive devices, among other tactics. The UN described their attacks as “brutal violence.”

The UN referred to government actions as “widespread and indiscriminate bombardment,” adding that this “may amount to the crimes against humanity of forcible transfer, murder and other inhumane acts.”

On HTS, the commission said they executed civilians for dissent and shelled civilian areas, among other abuses. Commission member Karen Koning AbuZayd said “the acts by HTS members amount to war crimes,” per the press release.

The humanitarian situation in northwest Syria is bleak. UN Security Council members are currently arguing over which border crossing points are to remain open into the embattled territory. Closing some of the crossings into Idlib through Turkey, as Russia and China want, could further worsen the situation. More than a million people are displaced there and are struggling with the rising prices of food and medicine.