Turkey delivers coronavirus aid to Iraq as it continues its operations against Kurdish groups in the country's northern semi-autonomous Kurdish region. 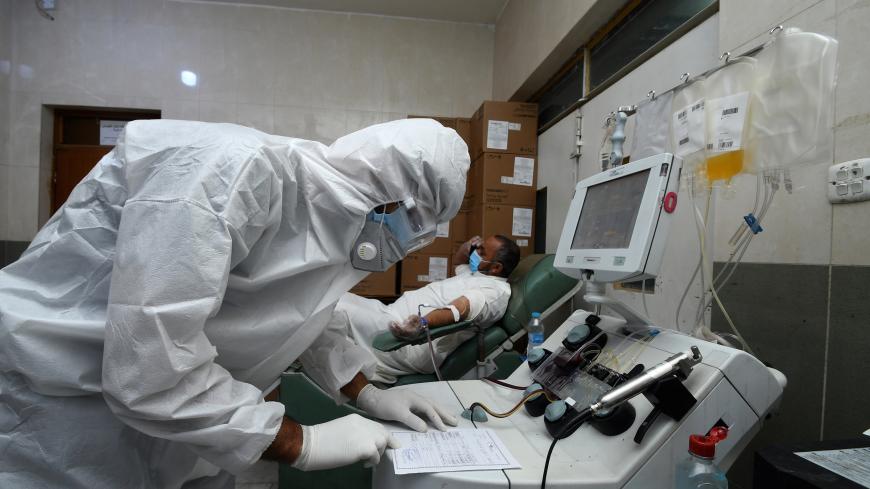 An Iraqi phlebotomist draws blood plasma from a recovered COVID-19 patient at the blood bank of Iraq's southern city of Nasiriyah in Dhi Qar province, on June 24, 2020. - ASAAD NIAZI/AFP via Getty Images

A Turkish military jet delivered coronavirus-related aid to Iraq today. The assistance comes as Turkey continues its war against Kurdish militants in the country, despite opposition from Baghdad.

Iraq is currently experiencing a major outbreak of the virus. The country has registered well over 1,000 cases per day for weeks despite lockdown measures and a ban on most passenger flights. Iraq registered 2,415 cases today, bringing the total number of infections the country has had to 51,524, according to Iraqi Ministry of Health statistics.

The Turkish aid is significant because of Turkey’s ongoing military operations in Iraq, which have been condemned by Iraqi authorities. Last month, Turkey began a large-scale operation against Kurdistan Workers Party (PKK) fighters in Iraq. Turkey has performed such operations for several years.

The PKK is a Kurdish armed group that seeks greater Kurdish political and cultural rights in Turkey. It has long based itself in the mountains of the autonomous Kurdistan Region of Iraq near the Turkish border. It also has a presence in the disputed and federally controlled Sinjar and Makhmour areas of Iraq in the west and north, respectively. Turkey and the United States consider the PKK a terrorist organization.

Iraq summoned the Turkish ambassador over its actions last month, and the Kurdistan Regional Government called on Turkey to respect its sovereignty.

It is possible Turkey seeks to mend its strained relations with Iraq with the delivery, but Turkey has given virus aid to many countries around the world.