The Court of Appeal said Begum, who is currently detained in Syria, should be allowed to return to her home country to fight the UK’s decision to revoke her British citizenship. 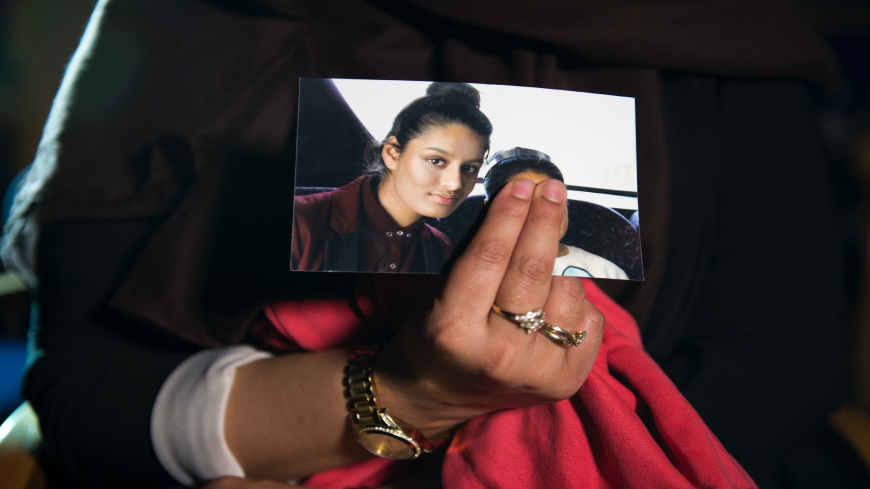 Renu Begum, eldest sister of Shamima Begum, 15, holds her sister's photo as she is interviewed by the media at New Scotland Yard, as the relatives of three missing schoolgirls believed to have fled to Syria to join Islamic State have pleaded for them to return home, on Feb. 22, 2015, in London, England. - Laura Lean - WPA Pool/Getty Images

Shamima Begum, who left London as a teen to join the Islamic State (IS) in Syria, should be allowed to return to her home country to challenge the UK’s decision to revoke her citizenship, a British court said Thursday.

The UK Home Office maintains that Begum, who lived under IS rule for several years, is a threat to national security and called the Court of Appeal judgment “disappointing.”

"We will now apply for permission to appeal this judgment," a Home Office spokesperson said in a statement. "The government’s top priority remains maintaining our national security and keeping the public safe."

Whether to repatriate and prosecute those like Begum who traveled to the region to join the terrorist group has proven to be a thorny issue for Western governments, many reluctant to get involved in what can be a politically unpopular subject at home. More than 2,000 suspected foreign fighters, along with their wives and children, remain in a sort of legal limbo under the custody of the US-allied Syrian Democratic Forces in northeast Syria.

British journalist Anthony Lloyd tracked down a nine-months pregnant Begum in a Kurdish-run Syrian refugee camp in February 2019. Just four years earlier, she and two classmates from east London’s Bethnal Green neighborhood boarded a flight to Istanbul and from there slipped across the border into Syria.

Shortly after arriving in the IS capital of Raqqa, then-15-year-old Begum married a Dutch militant. They had three children, all of whom died as infants, she said.

In her interview with Llyod, Begum said she wanted to return to the UK but didn’t regret having traveled to IS territory. She later told Sky News the experience under IS made her “stronger” and that people should have sympathy for her.

Begum’s seeming lack of remorse in the British press sparked a heated debate among those who said Begum knew what she was signing up for and should face the consequences. Others pointed out she was a minor at the time.

“I think she had an idealistic idea of a utopian caliphate, and of course when she got there, she found something very different,” said Anne Speckhard, director of the International Center for the Study of Violent Extremism.

“She was a schoolgirl and impressionable — I think we can even say groomed by what she was reading over the internet,” said Speckhard, who met with Begum twice during visits to Syria.

In February 2019, then-Home Secretary Sajid Javid stripped Begum of her citizenship. Doing so is only legal if a person can obtain citizenship in another country.

The UK government said that because both of Begum's parents are citizens of Bangladesh, she too was entitled to citizenship in the South Asian country. But Bangladesh’s Ministry of Foreign Affairs said the England-born teen was not one of its citizens, had never visited the country and “there is no question” would be denied entry.

Lawyers for Begum appealed a decision from the UK’s Special Immigration Appeals Commission that found that Javid's decision to revoke her citizenship was lawful and did not render Begum stateless.

“The case is less about Shamima Begum now and more about what does citizenship really mean,” said Tasnime Akunjee, a lawyer representing Begum’s family.

“Is there now a two-tier system in the UK where if your parents come or hark from a different country, despite you being born here, then your citizenship is of a lower quality than somebody whose parents don’t come from another country?” Akunjee asked.

Begum’s legal team had argued she was unable to mount an effective case from Syria as she cannot speak with her lawyers confidentially and cell phone service in the region is intermittent at best.

On Thursday, the Court of Appeal agreed “the only way in which she can have a fair and effective appeal” would be from the UK and that national security concerns could be managed.

Begum’s family, Akunjee said, is “heartened by the news but knows this is still a very long road ahead.”