The top Democrat on the Senate’s Middle East panel isn’t dropping the fight to force the Donald Trump administration to declassify the legal justification for the January strike that killed Iranian Quds Force commander Maj. Gen. Qasem Soleimani in Iraq. 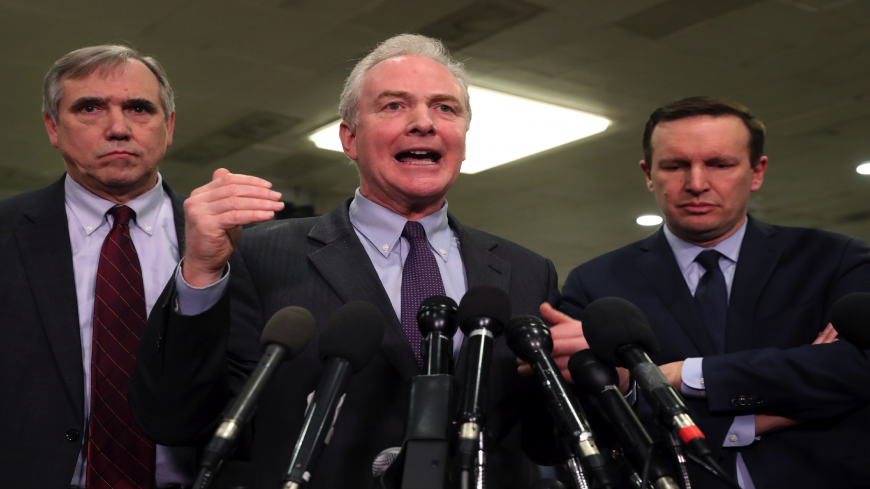 Sen. Chris Van Hollen (D-MD) (C), speaks at the US Capitol on Jan. 8, 2020, in Washington, DC, while flanked by Sen. Jeff Merkley (D-OR) (L), and Sen. Christopher Murphy (D-CT) (R), after attending a briefing with administration officials about the US killing of Iranian Maj. Gen. Qasem Soleimani. - Mark Wilson/Getty Images

The top Democrat on the Senate’s Middle East panel isn’t dropping the fight to force the Donald Trump administration to declassify the legal justification for the January drone strike that killed Iranian Maj. Gen. Qasem Soleimani in Iraq.

“We’ve seen the Trump administration repeatedly classify information just because it is politically damaging to President Trump, and it’s up to Congress to stop it,” Murphy said in a statement. “The American people deserve to know why the Trump administration chose to kill Qasem Soleimani back in January, since this event had far-reaching consequences for US security. By hiding the legal rationale for this action, there can be no meaningful public debate about the wisdom of the strike.”

Why it matters:  The Trump administration claimed the Soleimani strike was legal as an act of imminent self-defense under Article II of the US Constitution as well as the 2002 military authorization to invade Iraq. After lawmakers had an opportunity to review the classified intelligence in January, Republicans largely sided with the president while Democrats maintained that Soleimani was not planning any imminent attacks on US interests, raising the prospect that the strike was illegal. Trump himself backed off the argument that Soleimani was planning an imminent attack when vetoing Congress’ Iran war powers resolution in May. Instead, Trump argued that the president’s Article II authorities allow him to take military action beyond instances of imminent self-defense.

A bipartisan group of lawmakers has also tangled with the Trump administration over the intelligence community’s refusal to declassify the report naming all Saudi officials complicit in the murder of journalist Jamal Khashoggi, which could implicate Crown Prince Mohammed bin Salman.

What’s next:  Murphy said he expects to hear back from ISCAP this fall. The agency consists of representatives from the departments of State, Defense and Justice, as well as the National Archives, the National Security Council and the Office of the Director of National Intelligence. ISCAP has reviewed more than 2,400 documents between 1996 and 2015, declassifying information in more than 1,800 of them, according to George Washington University.