Attacks by ultranationalist Jewish settlers in the West Bank have occurred this year amid Israel's planned — but so far unsuccessful — attempts to annex parts of the Palestinian territory. 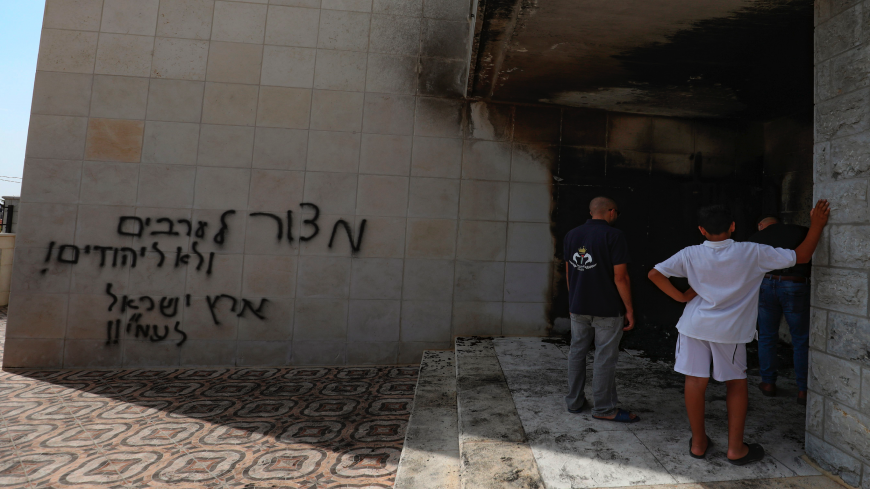 Palestinians inspect the damage at the entrance of a mosque that was torched and sprayed with graffiti in Hebrew, in Al-Bireh, north of the city of Ramallah in the Israeli-occupied West Bank on July 27, 2020. - ABBAS MOMANI/AFP via Getty Images

A group of Israeli settlers firebombed a mosque in the West Bank early this morning, according to multiple reports.

Settlers attacked the mosque in el-Bireh near the Palestinian capital Ramallah shortly after midnight on Monday, the Associated Press reported, citing a Palestinian Authority official. The attackers spray-painted anti-Palestinian slogans and threw firebombs that burned part of the mosque, according to the outlet.

Israeli police have not commented on the incident. Several attacks have taken place by ultranationalist Jewish settlers in the Palestinian territory in recent months, according to The Times of Israel.

Israel captured the West Bank from Jordan in 1967 following the Six-Day War. The population is mostly Palestinian, but there are also Israeli settlers living throughout the territory. Some of the settlers hold extremist Jewish beliefs and live in outposts not approved by the Israeli government.

Attacks from such groups against Palestinians are not new. An Israeli man from a West Bank outpost was found guilty by an Israeli court in May of killing a Palestinian family via an arson attack in 2015.

The recent attacks are happening as Israel attempts to start annexing Jewish settlements and the Jordan Valley in the West Bank. Israel’s unity government headed by Prime Minister Benjamin Netanyahu planned to start the process on July 1.

There have been no moves toward annexation to date, however. The United States insists Netanyahu gain full support from his coalition partners in the Blue and White party before annexing. Defense Minister and alternate Prime Minister Benny Gantz, who leads Blue and White, said annexation should not be rushed shortly before July. A high-ranking Israeli security official told Al-Monitor this month the chances of annexation are “low to nonexistent.”

UN Security Council resolutions consider the West Bank as Palestinian territory occupied by Israel. Annexation has also drawn criticism from Israel’s allies in Europe and Arab states in the Gulf who have grown closer to Israel in recent years.