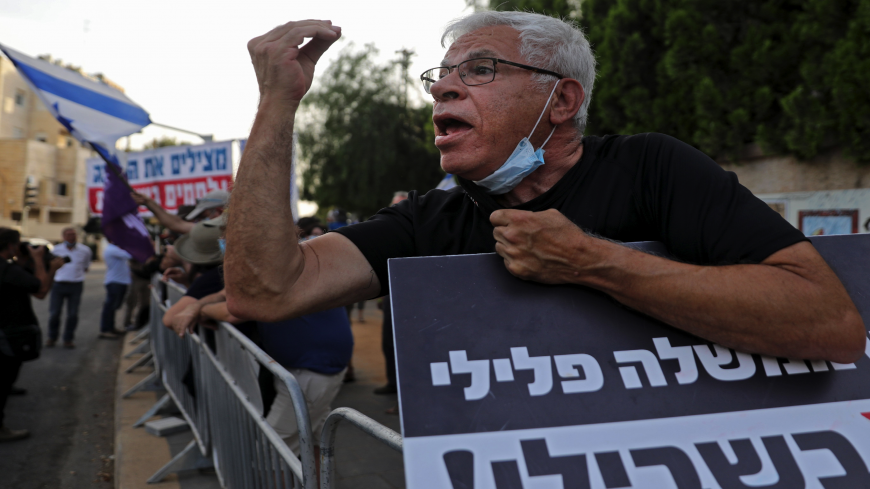 An Israeli demonstrator, wearing a protective mask amid the COVID-19 pandemic, speaks during a demonstration against Prime Minister Benjamin Netanyahu in front of his residence in Jerusalem, on May 17 2020. - MENAHEM KAHANA/AFP via Getty Images

Protest organizers said six people were injured during the clashes that ensued as police cleared their encampment.

“This morning at 5:40 a.m., a group of about 30 policemen, police officers and city inspectors attacked the encampment,” protest organizers said, according to The Times of Israel. “Without identifying themselves or presenting any [court] order, they began to violently confiscate the protesters’ private property without an explanation as to why the property was seized."

The city of Jerusalem denied the claims, adding that only property without a permit was removed.

For the past month, a group of Israelis has staged a sit-in outside Netanyahu’s official residence in the capital city, calling on the longtime Israeli leader to resign over corruption charges. Netanyahu, the country’s first sitting prime minister to be tried in court, was indicted in November 2019 on charges of bribery, fraud and breach of trust.

In addition to the corruption allegations, Netanyahu faces deepening criticism over his government’s handling of the coronavirus following an uptick in cases. The Health Ministry confirmed 1,201 new cases Monday, compared to the average of 20 new infections daily reported in mid-May.

The country of some 9 million people has now registered a total of 39,871 COVID-19 cases since February and 364 deaths.

“The achievements in dealing with the first wave were canceled out by the broad and swift opening of the economy,” the epidemiologist wrote in a Facebook post.

The same day, Israel announced gyms, swimming pools, event venues and clubs would close for the foreseeable future. It has also ordered restaurants and places of worship to limit their capacities.