COVID-19 cases have increased to historic highs of around 2,000 a day in Iraq. 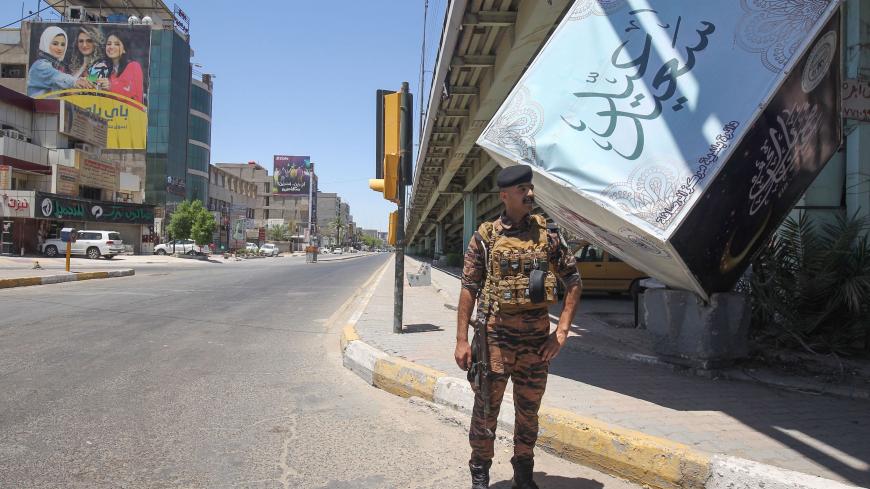 Iraqi security forces stand guard at a checkpoint enforcing a curfew due to the COVID-19 pandemic during the Eid al-Fitr holiday, marks the end of the holy month of Ramadan, in Baghdad, May 26, 2020. - AHMAD AL-RUBAYE/AFP via Getty Images

Iraq is instituting a “total curfew” for the upcoming Eid al-Adha holiday.

The curfew will be in place from July 30 until Aug. 9, according to a statement today from the Iraqi government. Past total curfew orders in Iraq have mandated a ban on non-essential movement and business, meaning people could only go to local supermarkets and pharmacies.

Today’s order also stipulated that security forces can impose fines and seize the vehicles of those who do not wear masks or practice social distancing, among other measures.

Eid al-Adha will begin in late July this year. The Muslim occasion commemorates Abraham’s willingness to sacrifice his son on God’s command. The holiday typically includes large meals and gatherings of family and friends in addition to prayers at mosques and at homes. The social nature of the holiday is prompting governments in the region to institute health guidelines aimed at mitigating the spread of the pandemic.

Iraq has been registering historic highs of around 2,000 or more COVID-19 cases a day since late June. There were 1,927 cases recorded today, according to the Ministry of Health.

Iraqi authorities first imposed curfews, bans on domestic travel and business closures in March to stop the spread of COVID-19. In April, they began easing restrictions. The federal and Kurdistan Region governments have both reimposed and lifted anti-virus measures several times since then. Restrictions vary by governorate.

The virus and accompanying closures have created severe economic hardship in Iraq. The ban on international passenger flights that still applies in some airports trapped many jobless people in the country, including low-income workers from abroad. A report from the International Organization for Migration found that employment, salaries and sales dropped by tens of percentage points in April.

Iraq reached 100,000 total confirmed COVID-19 cases last week. There have been a total of 112,585 cases as of today, according to the Ministry of Health.

The Iraqi government’s Eid al-Adha policy only applies to federal territory. The autonomous Kurdistan Region has yet to declare any restrictions for Eid.

Countries around the Middle East are beginning to issue guidelines for Eid al-Adha. Iraq’s neighbor Kuwait is reducing its curfew and allowing prayers in mosques for the holiday. On the other hand, Oman instituted a new curfew and ban on domestic travel for Eid.