More than 1,000 people have been arbitrarily detained and hundreds tortured by Yemen's warring parties, finds a new report. 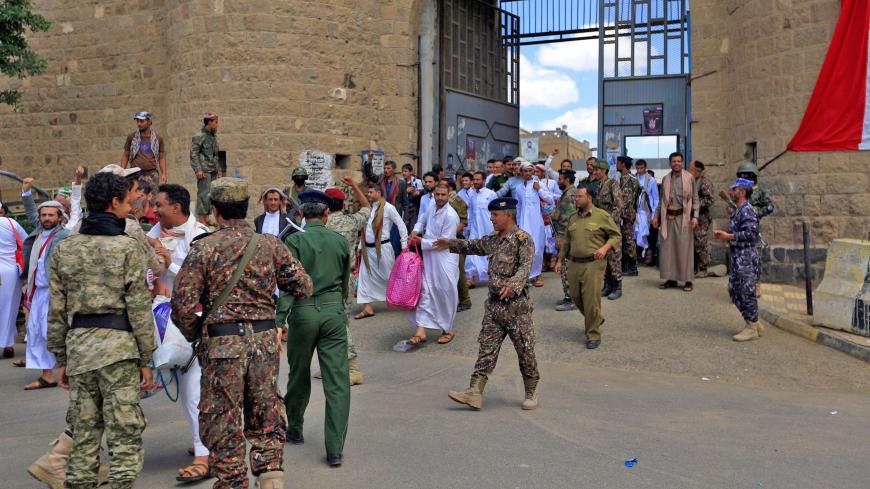 Yemeni prisoners said to belong the Saudi-backed government forces react following their release by the Houthi rebels from the central prison in the capital Sanaa before being handed over to their families on Sept. 30, 2019. - MOHAMMED HUWAIS/AFP via Getty Images

Yemen’s warring parties are using secret prisons to disappear and torture detainees, according to a grim new report from a leading human rights group.

The Mwatana Organization for Human Rights documented 1,605 cases of arbitrary detention, 770 cases of forced disappearance and 344 cases of torture at 11 detention centers across Yemen since 2016. Some of the abuse may amount to war crimes, the group said.

"This report confirms one fact: that all parties to the conflict are involved in committing arbitrary detention, enforced disappearance and of course the torture," said Osamah Alfakih, Mwatana’s director of communications and advocacy. "They do this because the accountability has been absent for a very long time."

Drawing on more than 2,500 interviews with former detainees, the 87-page report released Tuesday determined the Iran-aligned Houthi group was responsible for a majority of the detention-related abuse with 904 of the arbitrary or abusive detentions, 353 cases of forced disappearance, 138 cases of torture and 27 deaths in detention.

The Houthi rebels, who frequently broadcast forced confessions on loyal TV channels, “have used detention, enforced disappearance and torture as a method of domination, spreading terror among society,” the report’s authors said.

Forces backed by the United Arab Emirates, including the Southern Transitional Council (STC), were also named as abusers in the report. In detention centers run by the separatist group, prisoners were subjected to a wide range of torture that included nail removal, forced nudity and threats to rape them and their families, Mwatana said.

In the southern province of Abyan, former prisoners held by the STC-affiliated Security Belt said torture techniques included being forced to drink urine and being hanged upside down from ceilings. Some detainees were put in freezing cold pools of water until they lost consciousness, they said.

Mwatana also documented at least 90 of forced disappearance at the hands of forces loyal to President Abed-Rabbo Mansour Hadi in Ma’rib, Taiz, Al Jawf, Shabwah and Hadhramaut governates. Islah Party authorities in Ma’rib often accused detainees of spying for the UAE or working for the Houthis, the report found.

Yemen has been embroiled in civil war since 2014, when the Houthi movement, backed by Iran, seized the capital Sanaa and captured large swaths of the country from pro-government forces. More than five years of war has killed thousands of civilians and left nearly 80% of the population in need of some form of humanitarian assistance, the United Nations says.

In March 2015, a Western-backed military coalition led by Saudi Arabia intervened to restore the internationally recognized government. On at least four occasions, Mwatana said airstrikes from the coalition hit detention centers in Houthi-controlled areas, adding to “the fear of the families of those forcibly disappeared about the fate of their detained relatives.” In August 2019, the coalition targeted four community college buildings in the city of Dhammar, including one Mwatana says was being used as a detention site by the Houthis.

With the health care system on the brink of collapse and the novel coronavirus spreading undetected throughout the war-ravaged country, Mwatana has called on all authorities to release those held in overcrowded, unsanitary detention centers.

“The detention conditions in general are very appalling,” Alfakih said. “The fears of COVID-19 spreading in these places turn into nightmares for the prisoners and also for the families."