The Center for Strategic and International Studies listed the countries as among 12 that have given medical aid directly to African states. 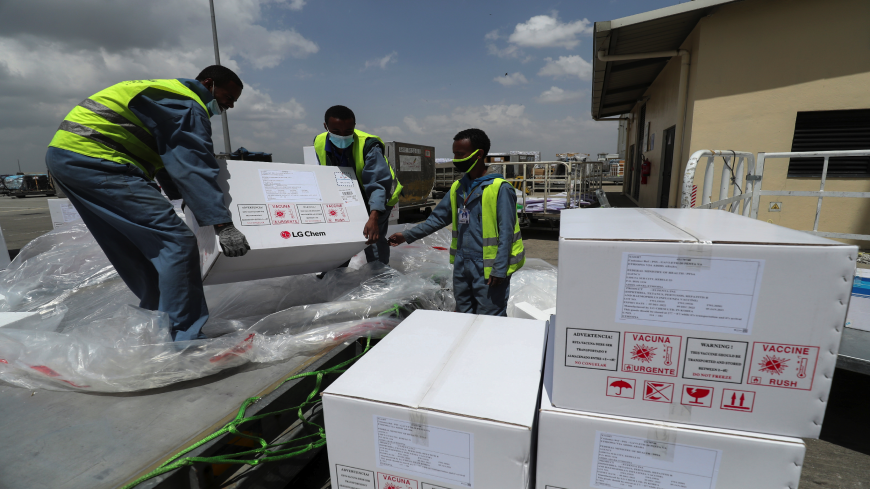 A shipment of supplies for coronavirus is processed at the Ethiopian Airlines cargo terminal within Bole International Airport in Addis Ababa, Ethiopia, May 15, 2020. Picture taken May 15, 2020. - REUTERS/Giulia Paravicini

Turkey, Qatar and the United Arab Emirates (UAE) are among the major donors of coronavirus aid to sub-Saharan African states, the Center for Strategic and International Studies (CSIS) said in a report released Friday.

The think tank listed the three Middle Eastern states as among 11 countries plus the European Union whose governments, foundations or private sectors had sent “funding, supplies and doctors” to sub-Saharan African countries. The region excludes North Africa, which connects to the Middle East via Egypt and shares the Arabic language with it. Other countries that donated to several sub-Saharan African countries were the United States, the United Kingdom, France, Russia, India, China, South Korea and Cuba, CSIS said.

Turkey, Qatar and the UAE each sent assistance to at least 10 individual African countries. Turkey and Qatar are close politically, while the UAE is aligned with Saudi Arabia in the Qatar-Saudi Arabia diplomatic conflict. However, Qatar, Turkey and the UAE gave to many of the same countries, including Ghana, Ethiopia, Somalia and Kenya, according to the center.

The aid took different forms. The Turkish Cooperation and Coordination Agency, which is part of the prime minister’s office, donated food to 150 families in the Kenyan capital Nairobi in May, according to Turkish state media. The governmental Qatar Fund for Development said it sent 10 tons of masks, protective equipment and other medical supplies to Somalia in May.

Some African leaders have acknowledged the support. Ethiopian Prime Minister Abiy Ahmed said he was “grateful” to the [UAE] government after it sent 15 tons of masks, protective gear and additional medical aid to the country in April.

Other countries announced support for the African Union or the continent in general, but Turkey, Qatar, the UAE and the other countries listed provided assistance directly to African states, CSIS said.

Some cases of the novel coronavirus in sub-Saharan Africa can be traced to the Middle East, as Africans traveling through the UAE, a major transit hub, picked up the virus, according to the report.