Many Israelis feel that a bill extending emergency powers to fight a possible second wave of the novel coronavirus goes much too far. 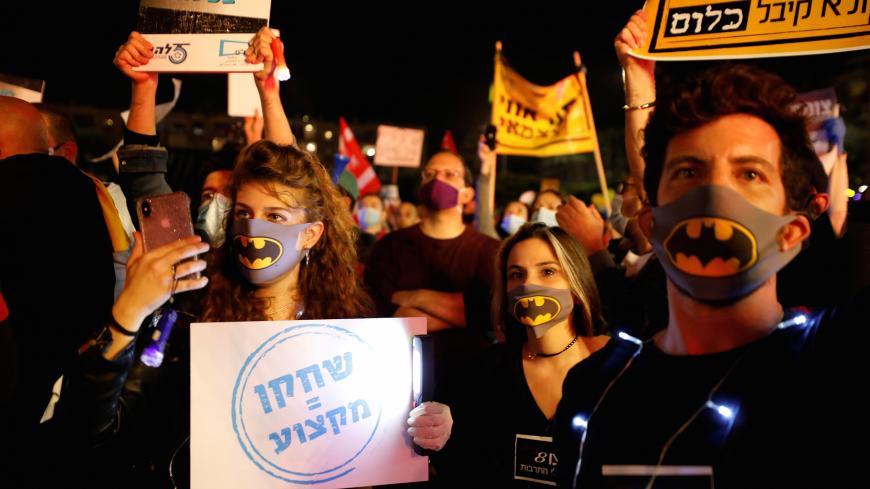 Artists protest with small businesses owners and other self-employed workers over the government's handing of the novel coronavirus crisis and the subsequent economic fallout, at Rabin Square in Tel Aviv, Israel, April 30, 2020. - REUTERS/Amir Cohen

Prime Minister Benjamin Netanyahu and Defense Minister Benny Gantz faced the cameras at the Knesset June 1, attempting to reassure Israelis over their "coronavirus law" proposal: A bill to enable the government to extend the country’s state of emergency by 10 months. Both men promised that the proposed law won’t infringe significantly on individual rights.

Netanyahu and Gantz had their work cut out for them. The explanations they provided were designed to calm the public storm that broke out a few days earlier, after news broke of the government’s intention to legislate the new law in order to avoid a second wave of the virus.

After the numbers of new infections decreased rapidly in May, the government started to ease restrictions, including reopening schools. But as of May 31, the numbers are increasing again, and it is clear that the coronavirus is still active in the country.

According to a draft memorandum, the bill would allow the government to impose emergency measures for up to 10 months and extend restrictions on movement. In fact, the government could impose a lockdown, enforce home isolation and grant police authority to disperse gatherings and to implement restrictions on behavior in the public sphere. The government could actually prohibit demonstrations altogether. The police would be permitted to enter homes of people infected with the virus without a warrant and use force to enforce health regulations.

When the bill's details were revealed, the social networks went crazy with public criticism. Thousands of citizens sent complaints to the Ministry of Justice against what they perceived as assault on privacy rights.

The opposition joined the widespread public criticism. Meretz leader Nitzan Horwitz argued that the bill is more dangerous than the pandemic itself and fitting for dictatorships. Opposition chair Yair Lapid claimed that the law will violate the public's privacy and be used as a tool to prevent dissent.

After all the objections, the government softened the bill, removing restrictions on demonstrations and the provision allowing police officers to freely enter citizens' homes.

This last element was apparently the one that really got Israelis steamed. Speaking at the Likud faction meeting on June 1, Netanyahu had to reassure the public that police won’t start barging into homes without a warrant. "Regarding civil rights and privacy rights, I just spoke with the public security minister and we agreed unequivocally that we will not allow police to break into citizens’ homes without a warrant. … We will find the necessary balance between the need to enforce the quarantine requirement and the need to safeguard citizens’ privacy and civil rights. We are aware that some members of the public think we intend to harm that balance. We haven’t done that so far and we will not do that in the future.”

Speaking at his Blue and White faction meeting also on June 1, Gantz related the same argument, as if the men had coordinated on their messages. "I hear that people are worried and wonder if we are headed toward dark zones. We will not permit any trampling of individual rights," pledged Gantz, promising that some of the measures outlined in the draft would be amended before the bill is passed into law.

Newly appointed Justice Minister Avi Nissenkorn (Blue and White) also joined the efforts to calm public apprehensions, vowing to limit the new law in time and scope and to ensure parliamentary control over its implementation.

Criticism generated some amendments to the bill, but did not prevent the government from advancing it. The unity government intends to have the bill approved soon at a first Knesset hearing, with the other two hearings necessary for its adoption held next week. The coalition is sure to achieve a majority for the proposed law.

The speedy legislation process is a product of the recent spike in infection. But the bill itself was born several weeks ago, when Attorney General Avichai Mandelblit warned the government against using emergency regulations in its battle against the pandemic. Mandelblit emphasized that these regulations are at the government’s disposal for security crises and lack any control by the parliament. He argued that such a situation is democratically unhealthy and that the government must choose the legislation route if it wishes to expand restrictions to contain the virus.

The fact is that ever since the beginning of the pandemic, Netanyahu has used exceptional means to contain it, including the Shin Bet tracking coronavirus carriers. Criticism over Netanyahu using the crisis to prevent demonstrations against him was expressed early on by his rivals. Netanyahu was also blamed for exploiting the crisis to spy on his own citizens. His rivals also said that he exploited the crisis to postpone his own trial, which finally opened on May 24.

Still, throughout the past few weeks, several demonstrations against the government did take place. Even the claim that Netanyahu was ready to close down the courts to avert his trial turned out to be false, as Netanyahu was present on May 24 at the Jerusalem district courthouse.

Having said all that, it is difficult to ignore Netanyahu’s legal situation, being accused of criminal offenses. The public has a hard time believing that his actions and decisions are devoid of any personal interest.

But Netanyahu is not the only one being criticized. Gantz is also targeted. From the moment he partnered with Netanyahu, he took on a shared responsibility. He now must prove that his alliance with Netanyahu serves to moderate the prime minister’s aggression. In that sense, the coronavirus law is Gantz’ first test within the government. If he manages to moderate the bill and minimize infringements on privacy rights, he could prove that his entering the unity government was fruitful.