Selling the plasma of COVID-19 survivors has become a profitable illegal business, after the minister of health announced that using survivor plasma to treat coronavirus patients has proven effective. 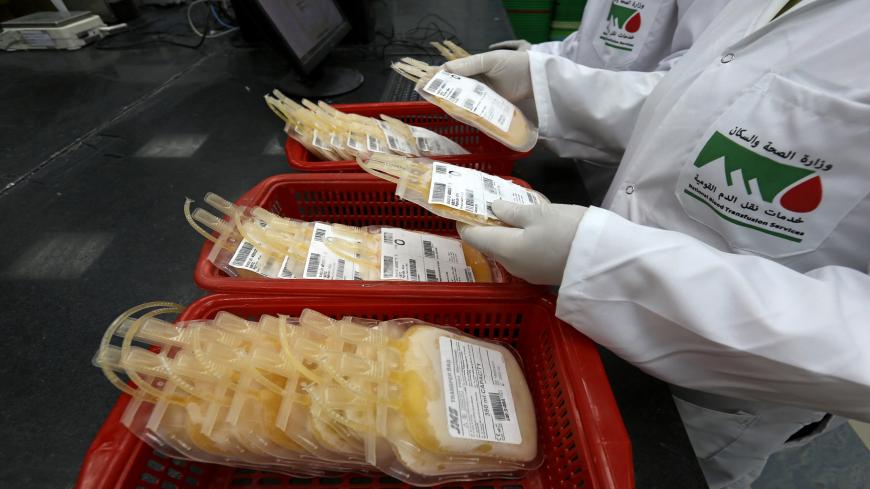 Doctors hold plasma bags donated for research purposes by patients who have recovered from the coronavirus, as the Ministry of Health distributes medicinal care-packages for those fighting the disease at home, at National Blood Transfusion Services in Cairo, Egypt, June 10, 2020. - REUTERS/Mohamed Abd El Ghany

Egyptian member of parliament Amal Rizkallah filed June 10 a motion requesting a briefing from the prime minister and minister of health on the trafficking of plasma of coronavirus survivors to patients at more than $2,000.

Commenting on the sales, Ayman Abul Ela, a member of the parliamentary Health Committee, said June 9 that plasma trafficking is a crime. Abul Ela warned in a statement against exploiting the coronavirus survivors by selling their plasma for the treatment of coronavirus patients.

He noted that trafficking is considered a crime under Sharia law. He explained that what is applicable to organs also applies to human tissue, and that plasma is a tissue whose sale is criminalized under the law governing organ transplantation.

On June 7, Al-Azhar Fatwa Global Center stated that it is against Sharia for a coronavirus survivor to sell his own plasma, taking advantage of the novel virus pandemic. It continued in its statement that an individual is not allowed to take advantage of the suffering of others by selling his blood at a higher price or selling it to a private clinic or via public auction at a higher than usual price.

Abul Ela told Al-Monitor by phone that plasma is a human tissue to which the provisions criminalizing the trafficking of organs in Egypt are applicable, as per Law No. 5 of 2010, namely the law regulating the transplantation of human organs.

He explained that Article 19 of the law that was amended in 2017 stipulates that transporting a donor organ to a recipient for transplant or transplantation of an organ by means of coercion or fraud, whether intentionally or unintentionally, shall be punishable with life imprisonment, and a fine of no less than 1 million Egyptian pounds ($61,700) and no more than 2 million pounds ($123,300). The same applies to the transport or transplant of a part of a living human organ. An aggravated imprisonment shall be imposed when a human tissue is involved.

Abul Ela noted that the death penalty applies in case the transportation or transplantation of an organ resulted in the death of the donor or recipient, underscoring that selling the survivors’ plasma to patients infected with the virus that causes COVID-19 at a price higher than normal, i.e., more than roughly $1,000 per liter, shall be punished by aggravated imprisonment, namely from three to 15 years in prison under the Egyptian law.

The Egyptian Ministry of Health and Population announced June 5 that the recovery and hospital discharge rate for coronavirus patients who were infused with blood plasma harvested from those who have recovered from COVID-19 is high.

Alaa Ghannam, director of the Right to Health Program at the Egyptian Initiative for Personal Rights, said that following the ministry's announcement, a black market of blood plasma emerged in Egypt.

Speaking to Al-Monitor over the phone, Ghannam explained that such a treatment involves the transfusion of antibody-rich plasma into COVID-19 patients to help them fight the virus and mitigate its risks, with some patients recovering and others showing less serious symptoms.

He said that some of those who had recovered took advantage by selling a liter of their own blood plasma at a price ranging between 15,000 pounds and 25,000 pounds ($930-$1,550). Ghannam described this practice as totally unethical.

The director general of the National Blood Transfusion Services of the Ministry of Health, Ehab Serageldin, told Al-Monitor that the positive results of the experiment prompted some of those who recovered to sell their blood plasma on the black market instead of donating it at the ministry’s blood transfusion centers.

He pointed out that the ministry monitored multiple Facebook calls for blood plasma sales, and underlined that such misguided practices are an exploitation of those who have recovered. He explained that a specialized medical technique, which is only available at the ministry’s labs, is required for the transfusion of antibodies, and that the plasma of a survivor can only be collected 14 days to 28 days after recovery.

Serageldin further explained that a medical report stating the patient’s need for blood plasma is required in order for the ministry to provide the patient with COVID-19 convalescent blood plasma, and stressed that the plasma is provided by the ministry for free. He pointed out that the panic is the reason for the illegal and unethical black market sales and hyperbolic prices.

Serageldin said that a single survivor’s blood plasma would be enough to treat two severe cases of COVID-19, and noted that the ministry launched a nationwide campaign to encourage blood plasma donations with the goal of securing enough blood plasma for patients after the COVID-19 convalescent plasma treatment has proven effective in many cases.