A group of young Syrians in Jordan’s Zaatari camp designed a sanitizing robot to help prevent the spread of the novel coronavirus. 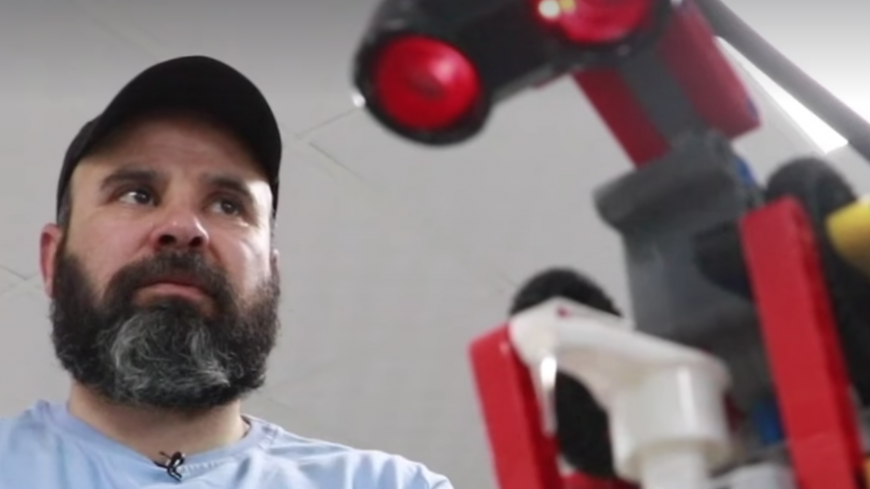 Marwan al-Zoubi appears in front of a robot he designed in a screenshot from an undated video. - FACEBOOK/UNHCR

In Jordan's Zaatari refugee camp, a group of five Syrian refugee students built a sanitation robot out of LEGO bricks to help their community prevent a coronavirus outbreak.

The idea came from Marwan al-Zoubi, who sought refuge in Jordan in 2013 after fleeing the Syrian city of Daraa. He began studying robotics in 2019 with the support of the Blumont organization and now teaches children robotics at the UNHCR’s Zaatari Innovation Lab.

“One of the causes of infection with COVID-19 is contact with surfaces, so I had the idea of designing a robot to sanitize one’s hands without the need to touch the sanitizer bottle,” Zoubi told Al-Monitor.

UNHCR’s Innovation Lab provided the necessary raw materials and funds for the simple LEGO prototype that uses a sensor to automatically dispense sanitizer.

Zoubi and his team at the Innovation Lab offered the robot to the UNHCR office in the camp, to be used by visiting refugees. “We seek to develop more advanced prototypes after the success of this one. But this time we will try to build a robot that would approach refugees to offer sanitizer,” Zoubi explained.

He added that he aspires to train more refugee children in robotics in the Zaatari camp, where the Innovation Lab has worked with some 500 children since its foundation in July 2019.

The Zaatari robotics team won fifth place in the Jordanian National Robotics Championship that took place in Jordan in November 2019, and was organized by the Jubilee Center for Excellence.

“Our team qualified for a regional championship that was slated to be held in Egypt in 2020 but everything came to a halt with the coronavirus,” Zoubi said.

UNHCR in Jordan praised these innovative efforts to counter the coronavirus. UNHCR spokesman Mohammad al-Hawari told Al-Monitor the refugees behind the robot showed talent and ingenuity.

“So far Jordan has not registered any case [of infection] among the refugees. UNHCR has implemented a preventive plan to counter the spread of COVID-19 in Syrian refugee camps. Movement in and out of the camps is under strict medical scrutiny and all vehicles entering the premises are being sterilized,” Hawari explained.

“UNHCR also suspended all visits," Hawari added. "We have medical centers and quarantine areas that are ready in the event the Jordanian government hospitals no longer have room for patients. We also have teams with extensive experience in fighting the spread of epidemics such as the bird and swine flu and Ebola in different areas of the world.”

He went on, “By early May, UNHCR had contributed $1.2 million to the Jordanian Ministry of Health to help purchase medical and laboratory materials and PPE.”

At the end of March, UNHCR made an appeal for $27 million to help prevent the spread of the coronavirus in Jordan, part of a global appeal for $255 million to support urgent preparedness and response measures for refugees and forcibly displaced people.

According to Hawari, “The funds earmarked for Jordan will be allocated to maintain basic services such as hospitals and medical clinics, including those inside refugee camps, the purchase of medical equipment, the provision of urgent cash assistance and the intensification of protective support, such as urgent referrals of cases of domestic violence and other forms of gender-based violence."