Will Israel fully legalize use of cannabis? 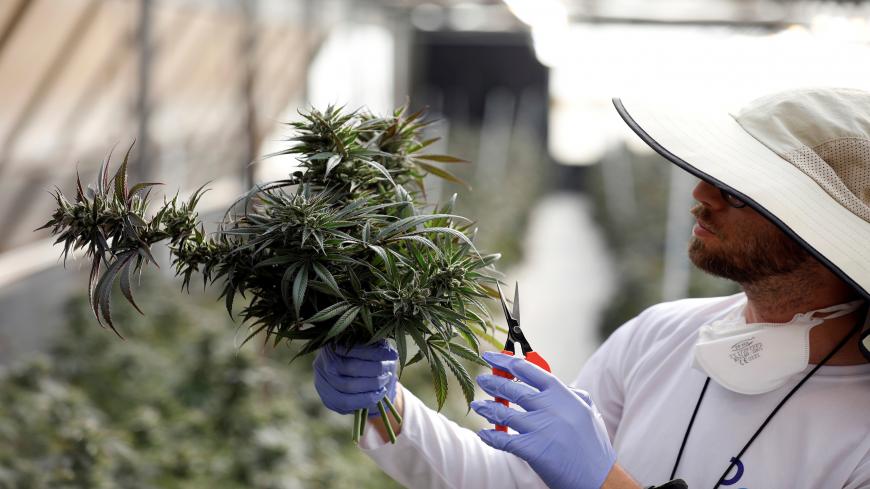 The inauguration of Israel’s 35th government on May 17 was a particularly depressing event for many Israelis. After all, they were watching one of the most bloated governments (34 ministers) in all of Israel’s history take office. But for the hundreds of thousands of cannabis users in Israel, it signified a happy change. For the first time in years, there is a real chance that cannabis will be fully legalized.

Of the 34 new ministers, including the prime minister, 19 support fully or to some extent legalization of cannabis use, or at least the regularization of the medical cannabis market; six are undecided, with a tendency to support it; five have not declared their position in any organized manner; and only three have declared that they oppose the legalization idea. In terms of percentages, 57% to 75% support advancing legislation on cannabis, and only 9% to 24% are opposed. The Cannabis Magazine news site shared with Al-Monitor results of a public opinion survey on the issue, conducted in August 2018, which found similar support (71%) among the general public.

“I admit that I am more optimistic than ever,” Oren Leibovitz, Israel’s well-known legalization activist, told Al-Monitor. “I’ve been fighting for a decade to advance legalization of this sort. Now, for the first time, I can definitely see it happening. Everything is already in place for Israel to approve the full legalization of cannabis. The persecution of over 1 million cannabis users in Israel will finally come to an end.”

It is more than just the number of ministers who back legalization that encourages the initiative’s supporters; it is also the fact that key positions in the path to advance it are now occupied by supporters of legalization. Israel’s new Minister of Health Yuli Edelstein (Likud) has openly expressed his support for regulating the medical cannabis market. This puts him at odds with the outgoing minister, Yaakov Litzman, who promoted much more stringent policies when it came to the unrestricted use of cannabis.

The Ministry of Internal Security, which is currently responsible for enforcing the law against cannabis users, has shown the most dramatic shift of all. The new minister, Amir Ohana (Likud), is the most vocal member of the new government to support legalization. Meanwhile, in the Justice Ministry, the new minister, Avi Nissenkorn (Blue and White), is committed to that party’s official position in favor of decriminalization and of controlled sale. This was also mentioned in the recent party’s election campaign. In an interesting turn of events, Israel is facing a strange situation in which the parties most vociferously opposed to legalization — Yamina, Yisrael Beitenu and the Joint Arab List — are all in the opposition now.

Likud Knesset member Sharren Haskel, one of the most visible leaders in the Knesset campaign for legalization, is convinced that Israel is on an important threshold. She told Al-Monitor, “We are facing a historic change. I’ve spent four years fighting for this against all sorts of groups and individuals. Thanks to our hard work we have managed to bring about a significant change in attitude toward the issue among most politicians. It is quite possible that the most important change we made was within the Likud itself. The dialogue we initiated resulted in an overwhelming consensus, unlike anything the Knesset has ever seen in terms of the number of supporters. That's why, in the last election, the Likud, Blue and White, and Labor-Meretz ran on this ticket.”

Now, the Knesset will not wait any more. Several new pieces of legislation proposals have been submitted, in an effort to advance the initiative as quickly as possible. Knesset members Haskel and Tamar Zandberg (Meretz) have submitted four new bills (two each) to amend the Drug Orders and relax existing laws regarding cannabis. These focus on revoking laws incriminating cannabis consumers, allowing the production of CBD (cannabis oil) and industrial cannabis, permitting users to obtain cannabis with a doctor’s prescription and allowing people using medical cannabis to drive. Knesset member Idan Roll (Yesh Atid) is expected to submit legislation to legalize cannabis fully in the very near future.

Supporters of legalization are relying mainly on a promise by Prime Minister Benjamin Netanyahu to create an official government committee to examine the conditions necessary for legalization. Leibovitz, who is expected to represent the public on this committee, believes that Israel should look to Canada for inspiration. “The model we are talking about is the Canadian model. This means a free market for cannabis sold for leisure use, with government supervision of the entire process. Sales will be limited to people over 21 years of age, in stores specifically for that purpose, and with strict limits on the amount they can purchase. At the same time, people will be allowed to grow cannabis independently,” he said.

Despite Leibovitz’s optimism, Haskel is convinced that full legalization, including the regulated sale of cannabis for leisure use, will not happen before the Knesset passes legislation to decriminalize cannabis. “I am well aware of the political reality, as well as of the conservative attitude among the public, not to mention among Knesset members. As a first step, I want to focus on legislation that would prevent the incrimination of users,” she said. "As far as I am concerned, once that no longer exists, cannabis has effectively become legal, because there are no criminal penalties for using it. The next stage will be regulation. That will require a discussion about technical issues, such as where it can be sold, when, to whom and how much.”

Still, Haskel estimates that the government will not propose on its own initiative such legislation, despite the widespread support it would have. “Proposing any government legislation is a very complex procedure, which requires enormous efforts at coordination,” she noted. “That's why we are focusing on private legislation with the backing of as many Knesset members as possible. We will launch information and parliamentary campaigns, and prepare the public for the process. On average, it takes 2½ years to pass a bill in the Knesset. I believe that the current Knesset will see the passage of laws concerning official state policy, which will completely prevent cannabis users from being treated as criminals.”