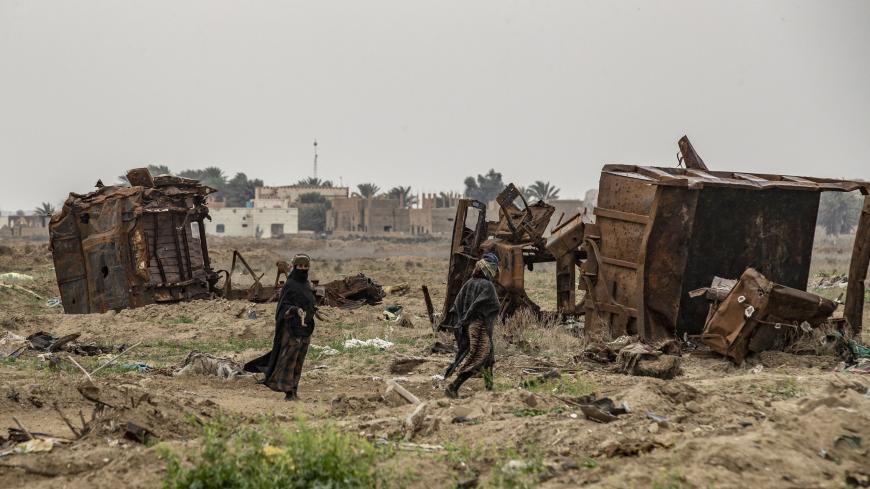 Relatives of farmer Hamad al-Ibrahim clean his damaged land in the eastern Syrian village of Baghouz on March 13, 2020, a year after the fall of the Islamic State's caliphate. - DELIL SOULEIMAN/AFP via Getty Images

An airstrike in eastern Syria carried out by the US-led military coalition assembled to fight the Islamic State (IS) has killed one of the group's senior figures, the Iraqi counterterrorism agency said today.

There was no confirmation from the US military today; the US Department of Justice has since September 2019 offered up to a $5 million bounty for information on his whereabouts. The department describes Jaburi as one of IS' most important leaders, and one who oversaw the group’s chemical and biological weapons research as the deputy head of IS manufacturing in Syria.

The reported strike on Jaburi in Deir ez-Zor was carried out by the US-led international military coalition using intelligence provided by Iraq, Iraq's counterterrorism agency said.

Deir ez-Zor province was home to the Islamic State’s final stronghold in Baghouz before it fell to the Kurdish-led Syrian Democratic Forces (SDF) and the coalition in March 2019.

The Iraqi counterterrorism agency tweeted, “Prime Minister and Commander-in-Chief of the Armed Forces, Mr. Mustafa al-Kadhimi, appreciates the efforts of the National Intelligence Service and the Counter-Terrorism Service for their coordination.”

Jaburi is the third Islamic State figure reportedly killed in oil-rich Deir ez-Zor this month. On May 17, a joint raid between the SDF and the US-led coalition left two Islamic State leaders dead. According to a coalition statement, Ahmad 'Isa Ismail Ibarhim al-Zawi, also known as Abu Ali al-Baghdadi, was the group's "wali," or governor, of north Baghdad. Ahmad 'Abd Muhammad Hasan al-Jughayfi, also known as Abu Ammar, managed the acquisition and transport of weapons, explosives and personnel.

“The removal of these [Islamic State] leaders will disrupt future attacks against innocent civilians and our security partners and in the region,” the coalition said then.

Since losing its last stretch of territory more than a year ago, the group continues to wage a low-level insurgency in both Iraq and Syria, a recent Pentagon inspector general's report found. In Iraq, the Islamic State is suspected in a series of recent crop fires and other attacks in the country’s disputed territories.

The United States maintains a military presence in both Iraq and Syria, where it is training and advising local partner forces. In recent months, the coalition has transferred a handful of bases to the Iraqi security forces as part of a planned drawdown in the country.