There were 416 new confirmed infections of the novel coronavirus in Iraq today. 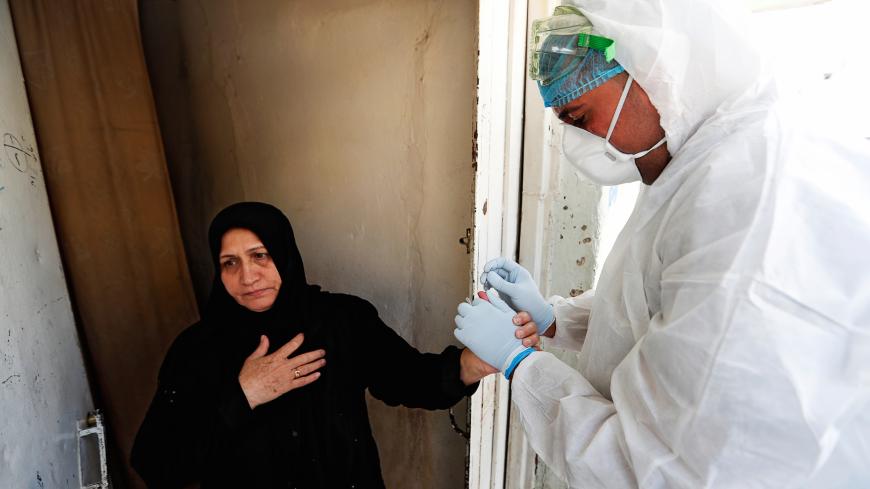 A health care worker takes blood samples from a woman during testing for the coronavirus disease in the Sadr City district of Baghdad, May 21, 2020. - REUTERS/Thaier Al-Sudani

Iraq registered more than 400 positive COVID-19 tests today, its highest ever total in a single day.

The Iraqi Health Ministry reported 416 infections today. The number included a whopping 265 in the capital, Baghdad. There were other cases in the south, the Kurdistan Region and throughout the country, according to the ministry.

The figure was the highest ever in a single day in Iraq, according to the Iraqi Kurdish news outlet Rudaw. Dr. Ali al-Bayati, a member of the quasi-governmental Iraqi High Commission for Human Rights, also told Al-Monitor the figure is Iraq's highest yet.

The large number of infections is the latest in a series of setbacks for Iraq as it fights the virus. Parts of Iraq first went under a series of lockdowns in March. Nonessential businesses were closed and civilian movement was restricted to acquiring necessities. The lockdown started to ease in April.

More recently, Iraqi authorities reimposed lockdowns in parts of Baghdad last week following 150 cases being registered in a day, including 120 in Baghdad. Iraq also experienced a jump with 163 new cases during the Eid al-Fitr holiday. The figures today thus constitute a significant increase in the rate at which the novel coronavirus is spreading.

Bayati said he believes authorities can do more to mitigate the virus’ spread. He said there should be more sterilizing of public places and hospitals as well as continued closures of schools, religious facilities and recreational centers. He also said low-income Iraqis need assistance acquiring the necessary protective gear.

He called for mask to be provided "free of charge through ration cards for poor families," while saying middle- and upper-income Iraqis could purchase them for "limited prices."

Many Iraqis are practicing social distancing, though some large gatherings continue in the country, including anti-government protests.